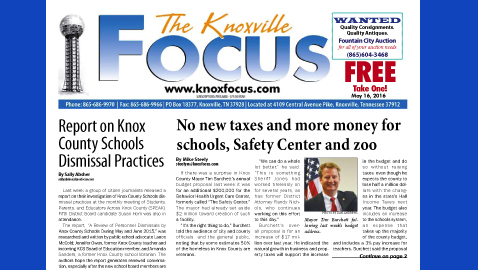 No new taxes and more money for schools, Safety Center and zoo

If there was a surprise in Knox County Mayor Tim Burchett’s annual budget proposal last week it was for an additional $200,000 for the Behavior Health Urgent Care Center, formerly called “The Safety Center.” The mayor had already set aside $2 million toward creation of such a facility.

“It’s the right thing to do,” Burchett told the audience of city and county officials  and the general public, noting that by some estimates 50% of the homeless in Knox County are veterans.

“We can do a whole lot better,” he said. “This is something Sheriff Jones had worked tirelessly on for several years, as has former District Attorney Randy Nichols, who continues working on this effort to this day.”

Burchett’s overall proposal is for an increase of $17 million over last year. He indicated the natural growth in business and property taxes will support the increase in the budget and do so without raising taxes  even though he expects the county to lose half a million dollars with the changes in the state’s Hall Income Taxes next year. The budget also includes an increase to the schools system, an expense that takes up the majority of the county budget, and includes a 3% pay increase for teachers. Burchett said the proposal includes $453.5 million for school operations and an additional $5.6 million for elementary reading programs, the Greater Schools Partnership and kindergarten intervention. All together the school system would get a $15.5 million increase.

“I’m proposing more than $400 thousand in additional dollars for the Knox County Election Commission,” he said, directing funding go to additional voting machines and cover the cost of additional election officials for the upcoming November election.

He also spoke of the recent approval of an employee incentive program for county employees and recognized Zach Johnson, Recycling Coordinator, for saving the county $3,000 with a suggestion for his department.

Burchett said he’s asking for an additional $1 million for paving of roads on top of the expected $1.6 million from the state.

The mayor praised Zoo Knoxville and CEO Lisa New for efforts to refocus efforts there and improve exhibits. The budget proposal includes more than $100,000 to support the improvements and Burchett said he will soon offer a resolution to commit $5 million over the next five years toward realizing the Zoo’s new master plan.

“This budget isn’t sexy but that’s the way it should be. We’re committing our resources to the things government should focus on: safety, health, education and infrastructure. We’re forging and strengthening partnerships in order to work more efficiently and to provide a high level of service to our citizens,” he said.

The budget now goes to the Knox County Commission and a public hearing today, where it should pass without much opposition. The commissioners could act on it in their regular monthly meeting on Monday, May 23rd.