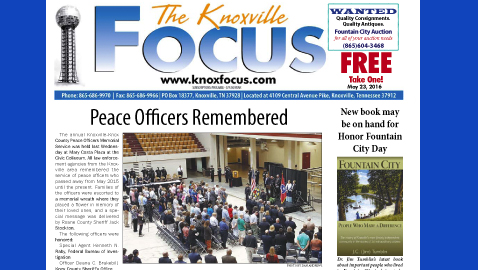 New book may be on hand for Honor Fountain City Day

Fountain City historian Jim Tumblin has written another book on the community and hopes to have copies available for Honor Fountain City Day on Monday, May 30th. The annual event begins at 10 a.m. and Dr. Tumblin will be the keynote speaker at the Community Awards Ceremony later that afternoon.

The new book, “Fountain City: People Who Made A Difference,” tells the life stories of different people who left an impression on the once-independent city such as John Adair and Col. J. C. Woodward. The book contains artwork and photos in each chapter, a history of the Fountain Head Hotel, and concludes with the city’s people during World War II.

“There’re fifty-six chapters and four of them deal with the McClung family,” he said.

“I’m giving the proceeds from the first day’s sales to the community,” Tumblin told The Focus.

Tumblin is a 1944 Central High School graduate and a graduate of the Illinois College of Optometry. He practiced optometry for 46 years, the last part of that in the Fountain Head Building. He’s been honored as Tennessee Optometrist of the Year, named Fountain City Man of the Year, presented the Knox Heritage Media Award, and inducted into the Central High School Hall of Fame.

After the new book is released on May 30, copies of it will be available for $25 at the Fountain City Arts Center at 213 Hotel Avenue; Page’s Fountain City Pharmacy at 5034 North Broadway; and at Pratt’s Country Store at 3100 Tazewell Pike.

Honor Fountain City Day is a function of Fountain City Town Hall. The annual event takes place at Fountain City Park and Lake and features entertainment by Brandywine, Nostalgia, Andy LeGrand and the Tennessee Wind Symphony. Performances will be at the Gazebo.

The Covered Pavilion will host the Traveling Zoo from UT’s Entomology Department and Upstage Birds of Prey.  Free activities in the park include face painting, games with prizes, a train ride and Joyful Twirlers.

The Community Awards Ceremony starts at the Gazebo at 3 p.m. and the Memorial Day Ceremony begins there at 3:30 p.m. Patriotic music will be led by Lynn Bennett and food will be for sale  by the Arts Center and the Church of the Good Shepherd. Local vendors and exhibitors will also be present.

Fountain City Town Hall will have icy cold drinks for sale along with fantastic desserts. T-shirts will be on sale and a silent auction will be conducted. Congressman John Duncan is to be present for the large community celebration.