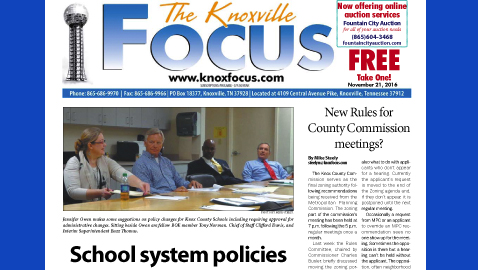 In a meeting that was sometimes jovial and sometimes blunt the Board of Education continued to wrestle with altering the policies dealing with relations between them and the director of schools. Several of the BOE members meet with Interim Superintendent Buzz Thomas Thursday in the mezzanine conference room of the Andrew Johnson building. Present for most of the two-hour meeting were Board members Jennifer Owen, Tony Norman, Lynn Fugate, Susan Horn, Terry Hill, and BOE Chair Patti Bounds.

Joining the superintendent were Bob Thomas, Clifford Davis and Kelly Drummond. Deputy Knox County Law Director Gary Dupler was there and had been working with Owen on changes to the legal wording of policy.

Davis, Chief of Staff, led most of the potential changes and read them one by one for comments.

Thomas was pretty direct as he replied to some of the proposed changes. As the policies are being changed or tweaked it appears the new language will apply more to a full-time superintendent, when hired, and gives much more control to the elected school board.

The Superintendent Search Committee meets Tuesday to begin that search.

Some, like the opening of the Executive Committee meetings to school board members and changing a board member’s desire to move a consent items to discussion with a majority vote instead of an unanimous vote, Thomas said he agrees with.

BOE member Jennifer Owen suggested changing the powers of the superintendent so that he or she would need board approval before changing the organization structure of the central office. She sited incidents over the past months where major changes have taken place without the board’s knowledge.

“You’ve heard my sermon against that,” Thomas said. He said that having to seek prior approval for such changes would violate his contract. He added that passing some of the suggestions being made by Owen and other board members would “tie the board in knots” trying to run everything.

Owen rebutted that administrative changes took place “twice in a month” and added “We’ve got to examine why it’s going on.”

Thomas said the administration is constantly in state of flux and disagreed with changing the administrative duties by adding “the word approval” would mean he must get approval “before I can do it.”

“We should be aware of major changes,” Owen said.

He noted that his contract as interim superintendent is his authority and explained several changes he’s made including having the Human Resources and Finance Department report directly to him and taking Community Relations into the Communication Department.

“If you all think I’m screwing up you can give me one month’s salary and fire me,” he said.

Hill asked Owen if “your rub is the board didn’t approve it” speaking of Thomas and his reorganization of the staff. Hill then said there was “An elephant in the room” and added “This is a different time; we’re not where we were the last eight years.”

“This is about what’s going on right now,” Owen replied.

“Changes go on and we hear about them in the paper,” said Norman, adding, “We should be considered in it, somehow to be informed and get into the loop.”

Thomas said he’s trying to be more transparent and noted an open letter he sent to the board members and the public, adding that as a result he “came through with some good hires.” The discussion was tabled and should be discussed at the next Policy meeting.

The board also briefly discussed the qualifications of a full time superintendent and Thomas suggested the board “tweak it” before hiring anyone. The policy change might include requiring more than a Bachelor’s Degree, which is the minimum degree required by the state. It could also require teaching and administrative experience.

Also reviewed were the policies dealing with students who threaten or hint of suicide, bomb threats, and the credit recovery policy.