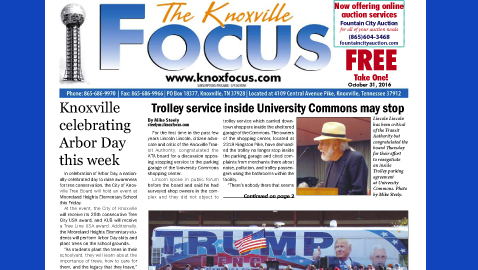 Yes, your vote will count

Cliff Rodgers, Knox County Administrator of Elections, told The Focus last week that anyone who hasn’t voted in the last two national elections become “inactive.” If the voter appears at their polling place they are asked if the address on file is still where they live. Then the voter will fill out a brief form, sign it, and be permitted to vote.

Anyone who fails to vote in two more national elections (four missed national elections total) will have their name removed from the rolls. “We send them a card asking if the address is correct. They can sign and return it and they will remain an active voter,” he said of those people who haven’t voted for a while. If you haven’t voted for a while and show up at the polls you can check to see if you’re still on the rolls. If not you can ask to vote on a provisional ballot.

Rodgers said the number of people taking advantage of  early  voting has been “incredible” and said turnout has been about 50% heavier than in the past two national election s. He also said that if someone hasn’t voted in the past two elections they might want to check and see where their voting precinct is located now.

He also confirmed that any state or national photo ID card is acceptable and added there have only been a few instances where people had no photo identification.

Rodgers also assured Knox County voters that every vote will count and said that the voting machines are not “online” and cannot be hacked. All final totals are collected at each precinct and hand-carried to the Old Courthouse Downtown by one member of each political party. There they are tabulated and the totals are recorded online.

“The machines never have a contact with the internet,” he said.

Anyone can call the election commission at (865) 215-2480 or go online to www.knoxcountyorg./election and find out where to vote in the early or general election.