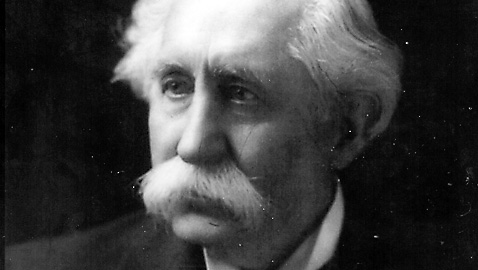 From the author’s personal collection.
General William B. Bate of Tennessee around the time of his death in 1905.

Just a few years following America’s bloody Civil War, as states were readmitted to the Union, old Confederates began to arrive in Congress.  The United States Senate particularly came to be dominated by Southerners, who occupied most of the powerful committee chairmanships.  It has been frequently said the Senate was the South’s revenge for the Civil War.

Tennessee’s William Brimage Bate was one of those old Confederates, held in high esteem back home, who landed in the United States Senate.  Bate had been a soldier, rising to the rank of Major General in the Confederate Army.  Bate was also an attorney, newspaperman, governor of Tennessee and finally, United States senator.

William B. Bate entered the world on October 7, 1826 in Sumner County, Tennessee near the little town of Bledsoe’s Lick.  Bate was actually one of those politicians who really did receive the first years of his education in a log cabin school house.  Bate’s education was rudely interrupted by the sudden death of his father when he was only fifteen years old.  Needing to help support his family, William B. Bate found employment as a clerk on a steamboat.  Much of the country’s commerce was done by boat in those days and Bate traveled on the Saladin from Nashville to New Orleans.  Bate was in New Orleans when the Mexican – American War erupted and he quickly joined a regiment comprised of volunteers from Louisiana.  Bate reenlisted in a volunteer unit from Tennessee and was awarded the rank of lieutenant.  Bate was among those soldiers serving under General Joseph Lane who pursued the Mexican dictator Santa Anna at the end of the war.

Eventually, William Brimage Bate made his way home to Tennessee and started a newspaper he curiously named the Tenth Legion in Sumner County.  Bate’s newspaper assumed a staunchly pro-Democrat stance and he strongly supported most democratic candidates and policies.  Bate won his first office in 1849 when he was elected to the Tennessee House of Representatives from Gallatin and Sumer County.  Bate also attended the Cumberland School of Law and earned a law degree.  Bate was elected attorney general for Davidson County in 1854.

William B. Bate became an ever increasingly partisan Democrat and worked hard for the election of Andrew Johnson to be governor of Tennessee.  Bate was chosen to be an elector for presidential candidate John C. Breckinridge of Kentucky in 1860 when the Democratic Party was deeply divided over the question of slavery.  The Democratic Party nationally had splintered with Illinois Senator Stephen Douglas representing northern Democrats, while Breckinridge, a former vice president, was more representative of Southern Democrats.  Bate turned down the opportunity to go to Congress in 1859 and became one of the leading voices for secession in his area.

Unlike many of his contemporaries who were more political officers than soldiers, William Brimage Bate was a fighting man.  When the cannons fired at Fort Sumpter, Bate hurriedly helped to form a company from Sumner County and was elected its Captain.  Bate was later elected Colonel for the Second Tennessee Infantry Company when Tennessee became part of the Confederacy.  Colonel Bate saw action at the Battle of Shiloh, where he was gravely wounded the very first day of the conflict.  Wounded in the leg, a doctor told Bate he would have to remove the leg, otherwise the Colonel would die.  Unmoved by the devastating diagnosis, Bate whipped out his pistol, pointed it squarely at the physician and calmly told the astonished doctor his leg was not about to be amputated.  While he survived the injury, the wound left Bate with a pronounced limp until the end of his days.

Bate’s brother Humphrey was not so lucky, as he was slain during the fighting at the Battle of Shiloh.

Following his recovery, William Bate was promoted to Brigadier General, but he complained bitterly when he was kept away from the fighting.  Bate was given a command in the Army of Tennessee and when Volunteer State Democrats offered him the gubernatorial nomination in 1863, he turned it down, preferring to fight.

Bate got his wish and was in the thick of the fighting at the Battle of Chickamauga.  General Bate had no fewer than three horses shot out from under him during one day.  Bate fought in the Battle of Missionary Ridge and due to his service to the Confederacy during the bloody Chattanooga campaign, he earned a promotion to Major General.

General Bate fought in the Atlanta campaign where he was wounded yet again in the leg, which confined him to bed for weeks.  Bate recovered enough to General John B. Hood for the invasion of Tennessee by the Confederate Army.  By the end of the war, General Bate was in North Carolina and he surrendered with his men near Greensboro.

Returning home to Tennessee after the war, Bate resumed his law practice.  General Bate was still very much a partisan Democrat and was popular enough to be nominated for the United States Senate in the Tennessee General Assembly on several occasions, although he was never elected.

Tennessee was suffering through an acute financial crisis after the Civil War and a depression helped to plunge the state into outright financial despair.  Tennessee defaulted on its bonded indebtedness in 1875, an issue which became the focal point of a serious division inside Tennessee’s Democratic Party.  Some wished to pay the state’s debt in full and were promptly labeled “High Tax” Democrats, while those who professed to believe it was impossible for Tennessee to repay all she owed and should only pay a portion of that debt were known as “Low Tax” Democrats.  The squabbling between Democrats caused the unthinkable and Republican Alvin Hawkins was elected governor in 1880.

Governor Hawkins was a candidate to succeed himself in 1882 and Senator Isham G. Harris helped to engineer the nomination of General William Brimage Bate as the Democratic candidate.  General Bate had a little something in his platform for both High Tax and Low Tax Democrats, proposing Tennessee only pay 50% of the debt on bonds held by the railroads.  Bate and many other Democrats claimed much of the money owed the railroads was little more than ill-gotten gains made possible by the administration of Governor William G. Brownlow, a figure positively loathed by most Tennessee Democrats.  Bate did propose to pay off some creditors fully, not the least of which was Sarah Polk, widow of the late President James K. Polk.  Yet some High Tax Democrats did not believe Bate’s plan went far enough and they nominated a candidate to run in the general election.

Even with the Democratic Party divided, General Bate proved to be so popular a candidate, he defeated Governor Hawkins and won the general election.  The candidate of the “High Tax” Democrats drew fewer than 5,000 votes compared to Bate’s winning margin of 132,201 votes.

Governor Bate further angered the railroads by submitting legislation to create the Tennessee Railroad Commission, which had the responsibility of regulating the railroads.  It is difficult to imagine in today’s world, but railroads were the primary means of travel throughout much of the United States at the time.  Many of America’s wealthiest citizens had ties to railroad companies and those same companies exercised considerable influence in the political affairs of many states.

Bate’s actions were especially popular with farmers, who were largely dependent upon the railroads to transport their goods to market and not surprisingly most farmers felt the rates they were being charged were quite high.  The act was later repealed by a different legislature and angry farmers took out their frustration on Democratic candidates.

Bate had been easily reelected by the Tennessee General Assembly every six years until his final term in 1904.  Two highly popular former governors very much wanted to go to the Senate; Benton McMillin and Robert Love Taylor each held senatorial aspirations and moved to oppose the old war horse for reelection.

Kenneth D. McKellar, in his book on Tennessee senators, recalled General Bate coming to Memphis to confer with McKellar’s law partner that year.  He recalled Bate being “greatly depressed” and his wounds were aggravating the general.  Bate’s political woes were complicated by the fact the city administration in Memphis, which McKellar remembered as being highly popular, was against Bate’s reelection.  The old general wondered if he should bother to run again and McKellar’s law partner, Colonel William Carroll, urged him to make another campaign.  Despite the opposition of the city administration, McKellar wrote that Bate enjoyed the full support of the Memphis delegation.

McKellar said that General Bate was not really a “learned man” and certainly was not a philosopher, but rather a plain, forthright man, devoted to his friends, state and country.

By the time Bate was elected to his fourth term in the United States Senate, he was seventy-eight years old and increasingly feeble.  There were stories about the old general’s fondness for the bottle, but he was still elected to yet another term.  Bate was sworn into office on March 4, 1905 and that same day the elderly senator watched President Theodore Roosevelt take his own oath of office.  Evidently Bate caught a cold, which soon developed into pneumonia.  The senator was too feeble to withstand the pneumonia and died on March 9, 1905.

A train was chartered to bring the old warrior’s body back home and as the former general’s coffin was lowered into the ground, fellow Confederate veterans fired the twenty-one gun salute.

An imposing man with a bristling moustache, which gave him a rather fierce appearance, William Brimage Bate was an unreconstructed rebel, firm in his convictions and highly respected and popular with his fellow Tennesseans.

The old senator was laid to rest in Mount Olivet cemetery in Nashville where he sleeps today.