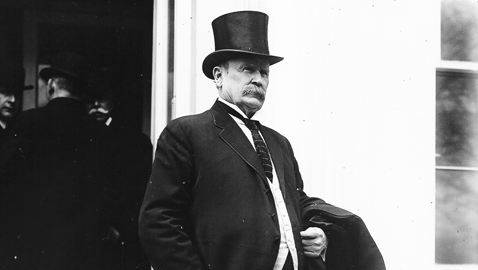 Almost entirely forgotten today, Benton McMillin was one of the most popular politicians in Tennessee for decades. McMillin served in Congress for twenty years, two terms as Tennessee’s governor, and went on to serve as a diplomat. McMillin’s wife, Lucille, was also an accomplished lady who enjoyed a political career of her own after her husband’s death.

Benton McMillin was born in Kentucky on September 11, 1845, the son of a wealthy planter. Young Benton very much wanted to participate in the Civil War, but his father refused to give his consent so that he could fight along side his two elder brothers who were serving in the Confederate Army. Still, McMillin managed to get himself captured by Union troops and the fiery youth refused to take an oath of allegiance to the Federal government. McMillin was briefly imprisoned for his refusal, but was released and he continued his studies by reading the law in the office of a local judge. After being admitted to the Bar in 1871, McMillin commenced the practice of law in Carthage, Tennessee.

Only three years after beginning his law practice, McMillin was elected to the Tennessee House of Representatives. Although a freshman legislator, McMillin was tapped by Governor James D. Porter to represent the State of Tennessee in making a purchase of territory from McMillin’s native State of Kentucky. Governor Porter later appointed McMillin as a special judge on the bench of the Circuit Court of the Fifth District. By 1878, Benton McMillin was well enough known to win the Democratic nomination for Congress. McMillin was elected and remained in Congress for two decades and won a reputation for his speaking abilities and knowledge of the legislative rules. The Speaker of the House, Thomas B. Reed of Maine, ruled the House of Representatives like a despot and Congressman McMillin frequently bedeviled the tart-tongued Speaker. McMillin was assigned to one of the most powerful House Committees, Ways and Means, where he remained for fourteen years of his Congressional career. McMillin’s political beliefs would not be popular with today’s partisan Democrats as he was a staunch advocate of economy in government. Congressman McMillin also often lectured his colleagues on the dangers of Federal judges encroaching upon the powers of the Congress. McMillin was highly critical of the high tariff policy followed by much of the Republican Party at the time and enraged big business for his support for effective antitrust laws.

Well before the adoption of the Seventeenth Amendment to the Constitution, Congressman Benton McMillin supported the idea of a two-percent tax on incomes above $4,000 (the equivalent of almost $100,000 in today’s currency). In 1894, McMillin managed to add his income tax proposal as an amendment to a pending bill and President Grover Cleveland made no objection, but the income tax was invalidated by the Supreme Court the following year.

When U. S. Senator Isham G. Harris died in office on July 8, 1897, Benton McMillin determined to become a candidate for the Senate. At the time, senators were elected by the General Assembly. McMillin very likely could have won a Democratic primary for the Senate, but the legislature instead chose Memphis attorney Thomas B. Turley, who had been appointed to the vacancy caused by Senator Harris’s death. Disappointed by his failure to win election to the United States Senate, McMillin opted to retire from Congress and run for governor in 1898.

McMillin was elected and proved to be a very popular chief executive. Governor McMillin remained an advocate of economy in government and helped to reduce Tennessee’s debt and kept a watchful eye on the treasury. McMillin also insisted the legislature increase the age for youngsters employed by factories, a common practice at the time. Benton McMillin also signed into law the first uniform textbooks for Tennessee’s schools.

McMillin was easily reelected to a second term in 1900 and after completing his time as governor, remained in Nashville and opened a successful insurance agency. Despite being confined to private life, Benton McMillin never gave up his aspirations for political office and remained a power inside Tennessee’s Democratic Party almost until the end of his life.

McMillin had long wanted to represent Tennessee in the United States Senate and was considered the leading candidate to replace Senator James B. Frazier in 1911. Frazier had been McMillin’s successor as governor and when Senator William B. Bate died unexpectedly on March 9, 1905, just days into a new six year term, Frazier allowed himself to be elected to the vacancy by the legislature. McMillin had been outraged by Frazier’s swift elevation to the United States Senate. When Frazier’s term expired in 1911, the senator wanted to be reelected but former Governor McMillin was also competing for the seat. McMillin’s cherished senatorial ambitions had been thwarted time and again and in 1911 a combination of “Independent” Democrats and Republicans elected Luke Lea to Senator Frazier’s seat. The “Fusionist” movement in Tennessee was to enjoy a period when it controlled the governorship and both of Tennessee’s seats in the United States Senate.

Few Democrats in Tennessee had so faithfully served the party as Benton McMillin; he attended every national convention of his party from 1876 until 1932, save for one instance in 1920. During the same period of time, McMillin was one of Tennessee’s Democratic presidential electors in every election.

At age sixty-five, Benton McMillin was called back to duty by Tennessee Democrats who urged him to again run for governor in 1912. Republican Ben W. Hooper had been elected in 1910, defeating Senator Robert Love Taylor. Taylor, himself a former governor, had not wanted to make the race, much preferring to remain in the United States Senate. His defeat shocked just about everyone and perhaps no one more so than himself. Taylor died shortly after his defeat and many believed his rejection by the people of Tennessee had broken his heart. McMillin campaigned energetically against Governor Hooper, but he, too, lost. Ben Hooper had managed to defeat two of Tennessee’s most popular Democrats to get himself elected and reelected governor.

Despite being seventy-seven years old, Benton McMillin made his last statewide campaign in 1922, seeking to return to the governorship. The incumbent was Republican Alf A. Taylor, brother of the late Robert L. Taylor. Governor Taylor was also in his seventies and his ouster of incumbent A. H. Roberts had jolted Tennessee Democrats. McMillin faced young lawyer and farmer Austin Peay in the Democratic primary and he ran a surprisingly strong race, winning by huge margins in much of his old Congressional district. McMillin swept much of the state and carried both Hamilton and Davidson counties; he narrowly lost Knox County, but the difference proved to be Shelby County. Peay won 9,079 votes in Shelby County to McMillin’s 1,732 votes. McMillin lost the primary by just over 4,000 votes.

It was to be Benton McMillin’s last hurrah. The former governor remained active, oftentimes unable to resist the urge to take to the stump on behalf of Democratic candidates in Tennessee. McMillin remained highly respected and popular with many thousands of Tennesseans. McMillin had served as a presidential elector for Franklin Delano Roosevelt in 1932, but did not live to see Roosevelt take office. Benton McMillin died January 8, 1933 and was buried in Nashville.

McMillin’s widow, Lucille Foster McMillin, went on to be appointed to the Civil Service Commission by President Roosevelt. Mrs. McMillin was quite well known throughout Tennessee and was especially admired by Tennessee’s powerful senior United States Senator, Kenneth D. McKellar. McKellar was anxious to see Mrs. McMillin honored and he pressed Roosevelt to give her an appropriate appointment. Roosevelt had appointed Tennessee’s junior U. S. Senator, Cordell Hull, to serve as his Secretary of State. Hull was himself an admirer of Lucille McMillin; the McMillins had been residents of Hull’s hometown of Carthage. Cordell Hull and Senator McKellar strongly supported Lucille McMillin for an appointment and both were gratified by FDR having placed her on the Civil Service Commission. It was an unusual appointment at the time and one of the highest offices ever to be occupied by a woman. Mrs. McMillin went on to serve as the Chair of the United States Civil Service Commission and remained as a member until her retirement in 1945.