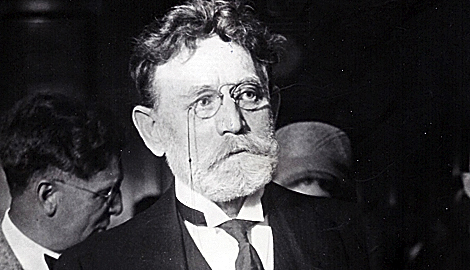 U. S. Senator James Hamilton Lewis of Illinois. From the author’s personal collection.

It seems highly unlikely anyone could be elected to any office today if he or she exhibited just a few of the eccentricities that were a part of James Hamilton Lewis.  Lewis was even for his time somewhat eccentric in his appearance and dress, but he certainly made an impression and was highly popular in his adopted state of Illinois.

Lewis was born in Danville, Virginia on May 18, 1863.  As a very small child, he moved with his parents to Augusta, Georgia.  After attending the University of Virginia, Lewis studied the law privately in Savannah, Georgia.  Lewis decided to move west to find his fortune and relocated in Washington State while it was still a territory of the United States.  Lewis arrived in the Washington Territory knowing virtually no one and almost penniless, yet it proved to be a wise move for young Lewis as within a few years he had been elected to the Territorial legislature and when Washington achieved statehood, J. Hamilton Lewis was elected to Congress as Congressman-At-Large.  Lewis only served one term in Congress, losing his reelection bid, although his ability as an orator made him so formidable in debate that even the famously acerbic Speaker of the House Thomas Reed preferred not to tangle with the freshman Congressman.

Lewis was the Democratic nominee for the United States Senate in 1899, at a time when legislatures still elected senators; Lewis lost his race for the Senate.  America was then engaged in the Spanish-American War and Lewis volunteered and while not seeing actual combat, emerged from the conflict with the rank of Colonel.

Following the Spanish-American War, J. Hamilton Lewis moved yet again, settling in Chicago in 1903.  Once again, his personality and ability brought him recognition and prominence.  Lewis was made Corporation Counsel to the City of Chicago by the Mayor, which was a very lucrative position.  By 1908, a mere five years after he had moved to Chicago, J. Hamilton Lewis was a serious, albeit ultimately unsuccessful candidate for governor.  Lewis was again a candidate for the United States Senate in 1912 at a time when the national Republican Party was deeply divided between the regulars who supported President William Howard Taft and the progressives, who favored former President Theodore Roosevelt.  Lewis was elected to the Senate from Illinois, making him one of the very few individuals to serve in the Congress representing two different states.

Known affectionately as either “Ham” or “J. Ham”, Lewis was the first to serve as a party “whip” in the Senate.  The whip was responsible for helping to line up votes for party measures in the United States Senate, as well as keeping an accurate tally for how a pending vote might go.  Lewis proved to be a skillful legislative strategist and did much to help along President Woodrow Wilson’s agenda.

In 1918, Lewis had to make his appeal directly to the people of Illinois, as the legislature no longer had the power to elect members of the United States Senate.  Lewis faced wealthy Republican Medill McCormick, brother of Colonel Robert McCormick, powerful publisher of the staunchly Republican and isolationist Chicago Tribune.

J. Hamilton Lewis was an excellent speaker with a flamboyant appearance.  A man of slight proportions, Lewis sported a busy Van Dyke beard that was likely dyed as he aged; many contemporary reports refer to the “pinkish” color of his whiskers.  Lewis also wore a toupee; evidently J. Hamilton Lewis made no effort to purchase a hairpiece that was life-like, as his own was quite obviously a toupee.  In fact, there are instances where Lewis would appear inside the Senate chamber without his toupee on very hot days, although he didn’t seem to ever allow himself to be photographed without his hairpiece.

J. Hamilton Lewis was also something of a clotheshorse and many enjoyed waiting for his appearance on the Senate floor to see what he was wearing on a given day.  Lewis frequently wore spats long after they were out of fashion.  Senator Lewis clearly enjoyed adding color to his wardrobe and might appear inside the Senate Chamber wearing a dark suit with a cream-colored waistcoat, a bright green tie and matching socks.  A silk handkerchief of some sort would be carefully tucked into his breast pocket.

Lewis was once cautioned to tone down his dress before attending a political meeting in a poorer neighborhood, dominated by the laboring class.  J. Hamilton Lewis arrived that night in full evening dress of top hat and tails.  He told the assembled working people he came to pay his respects and wore his finest clothes, as he felt they deserved the best he had.  Lewis left the hall to the cheers of his new supporters.

After narrowly losing his reelection campaign to Medill McCormick, Lewis remained quite active in the Democratic Party and politics.  He ran for governor in 1920, but lost.  A recognized authority on both the Constitution and foreign affairs, Lewis concentrated on international law in his practice and earned a handsome living.

J. Hamilton Lewis bided his time, waiting for the opportunity to make a comeback.  That opportunity came in 1930 when the Illinois Republican Party tore itself asunder.  Lewis’s successor, Medill McCormick, had been defeated in the 1924 Republican primary by former Governor Charles Deneen.  McCormick was so distraught over his defeat he committed suicide, a fact that was carefully hidden from the public.  McCormick’s widow was Ruth Hanna McCormick, daughter of the legendary Mark Hanna, an extremely wealthy industrialist, alter ego of the late President William McKinley and a senator from Ohio.  Ruth Hanna McCormick had been elected Congressman-At-Large from Illinois in 1928 and proceeded to settle her political grudge with Senator Deneen in the GOP primary.  As a woman, Ruth Hanna McCormick was something of a novelty candidate and received widespread publicity in her Senate campaign and she spent freely from her vast personal wealth.  She managed to beat Deneen decisively and faced the most formidable foe the Democrats could nominate: James Hamilton Lewis.

Although sixty-seven years old at the time, Lewis had shown impeccable shrewdness in selecting the timing of his political comeback and campaigned vigorously.  McCormick was haunted throughout the general election for her enormous expenditures and although she pumped even more of her personal fortune into the general election contest, Lewis beat her badly, ending her electoral career.

James Hamilton Lewis returned to the United States Senate in 1931 and quickly resumed his old position as Democratic whip.  Chicago Mayor Anton Cermack promoted Senator Lewis as a “favorite son” candidate for the presidency in 1932, largely to keep Franklin D. Roosevelt from winning the Democratic nomination and giving the powerful boss leverage in naming the eventual nominee.  Senator Lewis himself had no desire to block FDR’s nomination and to the Mayor’s dismay, released the delegates pledged to him, many of whom backed Roosevelt.  Cermack’s stubbornness in opposing Franklin Roosevelt later cost him his life; the Chicago Mayor was in Miami, Florida standing near Roosevelt when a would-be assassin started firing, missing FDR, but hitting the bulky Mayor Cermack.  The seriously wounded Cermack was bundled into Roosevelt’s automobile and rushed to the hospital where he died several days later.

With Franklin D. Roosevelt’s election to the presidency in 1932 and the Democrats taking control of the United States Senate, J. Hamilton Lewis assumed even greater importance inside the Senate.  Lewis was a warm-hearted person for all his elaborate dress and he tried to befriend a little man from Missouri when Harry Truman came to the Senate in 1935.  Truman himself later told an aide that he arrived “under a cloud” due to his ties to the notorious Prendergast machine of Kansas City.  Senator Truman was treated with astonishing rudeness by many New Deal officials, not the least of whom was President Roosevelt himself.  It took FDR more than five months to find a fifteen minute appointment to allow the Missouri Senator to come and pay his respects and Truman barely spent half the allotted time in FDR’s office, although he later remembered Roosevelt as being as nice as he could be.  Author David McCullough, one of Truman’s best biographers, recorded a comment made to Truman by J. Hamilton Lewis.

The seventy-three year J. Hamilton Lewis intended to stay in the Senate and sought reelection in 1936.  His Republican opponent was Otis F. Glenn, himself a former member of the United States Senate.  Glenn was still a supporter of the unlamented and unpopular former President Herbert Hoover, while Lewis was an unabashed advocate of Franklin Delano Roosevelt.  1936 was the same year FDR carried every state in the union in his reelection campaign, save for Maine and Vermont.  Lewis easily won another term in the Senate.

J. Hamilton Lewis and his wife, fondly known as “Gypsy” to friends, remained fixtures on the social circuit in the nation’s Capitol.  Senator Lewis continued serving as the Democratic Whip in the Senate until his sudden death on April 9, 1939.  A funeral service was held for James Hamilton Lewis inside the Senate Chamber and he was buried in a mausoleum beside Arlington National Cemetery.  That mausoleum was later torn down and Senator Lewis’s remains were moved, although no one seems to know just where his earthly body rests currently.

Gypsy Lewis tried to keep her late husband’s memory alive as best she could, donating an imposing portrait of J. Hamilton Lewis to the United States Senate where it remains on display to this very day.  Lewis was fondly remembered by those who knew him, but as the years have passed, this colorful figure has been largely forgotten.