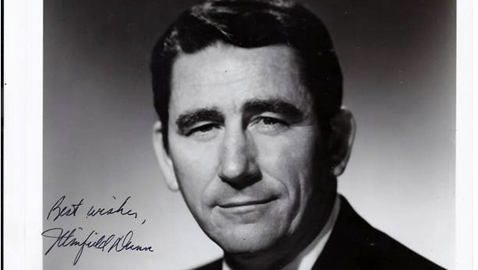 Bryant Winfield Culberson Dunn was born July 1, 1927, the son of Aubert and Dorothy Dunn.  Anyone who has had the pleasure of hearing Winfield Dunn cannot help but hear the soft Southern lilt in his voice, which is a reminder of the fact Governor Dunn was born in Mississippi.  In fact, Dunn’s father enjoyed a prominent career in politics himself.  Aubert Dunn served as district attorney, served a term in Congress, remained in Washington for a spell as an expert serving the Senate’s Finance Committee and was later a special attorney employed by the Attorney General’s office.  Aubert Dunn capped his career by serving as a Judge of the Circuit Court.

Young Winfield Dunn enjoyed a happy childhood in Mississippi, which he documents in his memoirs, From A Standing Start.  During World War II, Dunn served in the U. S. Navy and later in the Air Force Reserve.  After receiving a degree from the University of Mississippi, Winfield Dunn went on to earn a D.D.S. and commenced the practice of dentistry.  Dunn found the time to marry his sweetheart, Betty Prichard, and first practiced dentistry with his father-in-law.      The Dunns moved to Memphis and it wasn’t long before Winfield was engaged in public service, first as Chairman of the Shelby County Republican Party.  Following the death of Edward Hull Crump in 1954, Memphis politics changed abruptly.  Long-time Mayor Watkins Overton, who had retained the support of the Memphis Boss throughout most of his career, had tried to regain the mayor’s office in 1955, but lost to Edmund Orgill.  Orgill was a reformer and opponent of the Crump machine.  Orgill was a candidate for the Democratic nomination for governor in 1958, but lost to Buford Ellington.

The Crump machine was in tatters by the early 1960s and the last vestige of the Crump era, Congressman Clifford Davis, was defeated in the 1964 Democratic primary by George Grider.  Many former Crumpites were uneasy with Lyndon Johnson and his Great Society and began supporting Republicans.  A new age was dawning with the birth of Tennessee’s modern Republican Party.  Winfield Dunn was instrumental in birthing the baby of modern Tennessee Republicanism, working hard to elect Dan Kuykendall to Congress.  Kuykendall had challenged Senator Albert Gore, Sr. in 1964 and won a very respectable 46% of the vote while LBJ was carrying Tennessee.

Dan Kuykendall won election to Congress in 1966 just as Howard Baker defeated Governor Frank Clement to become Tennessee’s first popularly elected Republican U. S. senator.  Despite the fact there was no serious GOP candidate for governor that year, Tennessee was no longer a one-party state.  In 1968, the Republicans won control of the Tennessee House of Representatives and elected Bill Jenkins Speaker.  That same year, Richard Nixon carried Tennessee in a three-way contest with Vice President Hubert Humphrey and Alabama Governor George Wallace.

Governor Buford Ellington, having won a second nonconsecutive term in 1966, was ineligible to seek reelection in 1970.  Ellington had won a surprisingly hard fought primary with John Jay Hooker in 1966 and Hooker was running again in 1970.  Republicans sensed an opportunity and the GOP primary drew a slew of serious candidates.

Speaker Bill Jenkins, from upper East Tennessee entered the gubernatorial contest, as did Claude Robertson, an attorney and Chairman of the Tennessee Republican Party with close ties to Senator Howard Baker.  Millionaire businessman Maxie Jarman from Nashville became a candidate, as did a little known dentist from Memphis, Winfield Dunn.  Republicans even had a primary contest for the United States Senate between Chattanooga Congressman Bill Brock and country music star and actor Tex Ritter (father of the late John Ritter) to face Senator Albert Gore.

Each candidate carried his home base; Jenkins won the First District, Robertson the Second Congressional District, and Maxie Jarman won most of Middle Tennessee.  Winfield Dunn won more than 90% of the vote in populous Shelby County, which saw a heavier turn out than normal.  Dunn also ran well in other areas of the state and managed to edge out Maxie Jarman who spent freely from his personal fortune.

As expected, John Jay Hooker won a divisive Democratic primary and even Senator Gore had been hard pressed by Hudley Crockett, who had been Governor Ellington’s press spokesman.  Ellington, still unhappy with Hooker’s challenge in 1966, remained silent throughout the campaign, lending Hooker no support or aid.

Although never having been elected to any office previously, Winfield Dunn charmed the people of Tennessee.  Tall, handsome, well spoken and full of charisma, the forty-three year old Dunn made friends everywhere he went.  A young Lamar Alexander helped to manage Dunn’s effort in the general election and to the surprise of almost everyone, became Tennessee’s first Republican governor since the election of Alf A. Taylor in 1920.  Bill Brock was also elected to the United States Senate, giving Republicans both Senate seats and the governorship.  By 1973, Republicans would hold five of the nine Congressional seats.  It was to be the peak of Republican success in Tennessee for decades, but it lasted only briefly.

The inauguration of Winfield Dunn was something more than the usual spectacle; it was a celebration of success by delirious Republicans who had come back to power after decades in the darkness.

Governor Winfield Dunn immediately set out to heal the wounds from incessant political infighting, filling prominent positions with both members of his own party, as well as Democrats.  Still, Democrats, who had regained control of the House of Representatives, frequently refused to work with Governor Dunn.  Undeterred by Democratic intransience, Winfield Dunn managed to give much needed pay raises to state employees, as well as develop a building program for Tennessee.

With the 1972 elections, the modern Tennessee Republican Party had reached its zenith.  Robin Beard, who has served as Commissioner of Personnel, entered the race for the Sixth Congressional District, which was occupied by William R. “Bill” Anderson.  Anderson had served in Congress since 1964 when Congressman Ross Bass had been elected to the United States Senate.  Anderson was widely known in Tennessee, having been the Captain of the USS Nautilus, the first submarine to successfully travel beneath the North Pole ice cap.

Beard beat Anderson and the GOP held the First, Second, Third, Sixth, and Ninth Congressional districts in 1973, as well as both seats in the United States Senate and the governorship.  Richard Nixon’s triumphant victory over South Dakota Senator George McGovern in the 1972 presidential contest soon faded as the details of the Watergate break-in became public knowledge.

Governor Dunn, a man of absolute integrity, was shocked and astonished by the emerging details of the Watergate scandal, which would cause massive losses for Republican candidates all across the country in 1974.  Dunn was barred by Tennessee law from seeking a second term, but he worked hard for the election of Lamar Alexander, who faced former Congressman Ray Blanton at the ballot box.

Tennessee Republicans were routed in the 1974 elections.  Not only did Alexander lose, but also the GOP lost two Congressional seats.  Congressman LaMar Baker, who had succeeded Bill Brock when he was elected to the United States Senate in 1970, lost to challenger Marilyn Lloyd.  Congressman Dan Kuykendall in Memphis narrowly lost to a young state legislator named Harold Ford.

Tennesseans quickly saw the difference in the administrations of Winfield Dunn and Ray Blanton; Dunn, charming, urbane and gentlemanly, had tried to work with the Democratic legislature to accomplish his goals.  Governor Blanton was often sullen, imperious and autocratic.  The biggest difference of course was in the basic honesty between the two men and Blanton’s administration remains a disgrace.

Out of office, Winfield Dunn returned to the business world, serving as a Vice President of Hospital Corporation of America.  When it was believed Senator Howard Baker might leave the Senate in 1981, former Governor Winfield Dunn was perhaps the leading contender to fill the vacancy.  Dunn did not attempt a political comeback until 1986, after Lamar Alexander had served two four-year terms.  Dunn faced powerful House Speaker Ned McWherter who had defeated two popular Democrats to run in the general election.

Winfield Dunn easily dispatched two primary opponents of his own and mounted a campaign that enthused much of the Republican base across the state.  Unfortunately, First District Congressman James H. “Jimmy” Quillen maintained an ominous silence throughout the gubernatorial race.

While governor, Dunn had enraged Congressman Quillen by vetoing a bill to establish a medical school in upper East Tennessee.  At the time, there were already three medical schools serving Tennessee, but the legislature overrode the governor’s veto and the medical school was established.  Quillen nurtured and kept a watchful eye on the medical school, which was named for him, but he never forgave Winfield Dunn and that was a deciding factor in the former governor’s loss in 1986.

Dunn accepted his defeat gracefully and again returned to the private sector and assumed his status as one of Tennessee and the Republican Party’s elder statesmen.  Just last year, former Governor Winfield Dunn was named the Honorary Chairman of Mitt Romney’s presidential campaign in Tennessee.  Dunn traveled to the 2012 Republican National Convention and by all accounts was likely the most personally popular delegate from the State of Tennessee.  Described by some in the media as a “Southern Jimmy Stewart”, the former governor had recently recovered from serious surgery and yet looked every inch the statesman.  His smile was as friendly and disarming as ever; Governor Dunn regaled listeners with the many conventions he has attended, saying at eighty-five it would likely be his last.  Dunn’s discussion of the past remains clear and concise, just as his observations of the country’s future are sharp and cogent.

I cannot claim to be objective about Winfield Dunn; I think he was a great governor and more importantly, an even greater human being.  I well recall his first race and even though young at that point, I had my campaign buttons and signs for Winfield Dunn and Bill Brock.  Winfield Dunn is my friend and I his and I am proud of that fact.

Political defeat does not diminish truly great men and Winfield Dunn is one of those men.  For those who remember the rise of Tennessee’s modern Republican Party, Winfield Dunn will always retain a special place in the hearts of old-time Republicans, as well as those who were fortunate enough to come across his path.

Winfield Dunn’s election in 1970 remains one of the most significant political accomplishments in Tennessee history.  An unknown Memphis dentist winning the GOP primary over better known and better funded candidates was something of a political miracle; managing to win the general election and become the first Republican governor in fifty years was an equally great political accomplishment.

Governor Dunn and his lovely wife Betty reside in Nashville where they continue to enjoy their family and friends.  We enjoy them, too.