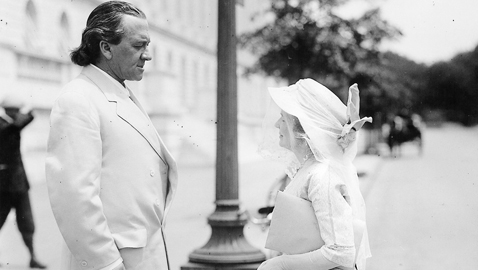 From the author’s personal collection. Senator James K. Vardaman stops on the street to converse with the widow of
Confederate General James Longstreet.

By Ray Hill
The South produced a number of successful demagogues, not the least of which was James K. Vardaman, a governor and senator from Mississippi.  At the height of his career, Vardaman was unquestionably the most popular politician in Mississippi.

James Kimble Vardaman was born July 26, 1861, just as the Civil War commenced.  Vardaman studied law, but did not practice his profession as he turned to journalism.  Vardaman became the editor of the Greenwood Commonwealth and later published Vardaman’s Weekly.  From his editorial perch, Vardaman penned broadsides that lacerated those he felt who deserved to be condemned and won himself a wide following amongst the less fortunate white citizens.

Politics soon beckoned James K. Vardaman and he was elected to the Mississippi House of Representatives in 1890.  Reelected twice more, Vardaman served as Speaker of the House in 1895.  Vardaman ran for governor in 1895, but lost.  He tried again in 1899, but was no more successful than the first time.

James K. Vardaman ran for governor of Mississippi for the third time in 1903 and won the Democratic nomination, which was tantamount to election.  Governor Vardaman proved to be enormously popular and espoused a populism that appealed to poor farmers. Mississippi’s elite ruling class ridiculed Vardaman’s supporters as “rednecks,” a title they bore proudly, oftentimes appearing at rallies wearing bright red kerchiefs tied about their necks.  The other element of Vardman’s politics was a virulent racism, which threatened the state’s economy.

Vardaman possessed an unusual and commanding presence.  One can easily presume James K. Vardaman became a model for the caricature of a Southern politician.  More than six feet tall, Vardaman wore his hair long, swept back from his forehead and falling almost to his shoulders.  During the winter, Vardaman was dressed in black, oftentimes wearing a hat and cape while out.  During the heat of the summer, Vardaman was resplendent in all white.  Wearing a white suit, a white hat clutched in his hand, and white boots, James K. Vardaman would oftentimes arrive in small towns sitting on cotton bales in a wagon drawn by forty yoke of white oxen.  Dubbed “The Great White Chief” or “White Chief” for not only his apparel, but his fierce racism in promoting white supremacy.

Vardaman’s command of the English language was impressive and his natural charisma and speaking ability allowed him to hold gigantic crowds mesmerized for hours.

The wealthy planters of Mississippi’s Delta proved to be the most persistent opponents of James K. Vardaman, although the governor’s popularity proved to be durable.  Vardaman was confined to one term as governor, unable to seek a second consecutive four-year term, so Vardaman cast his eyes toward the United States Senate.

In 1911, Vardaman sought election to the U. S. Senate and was challenged by Congressman John Sharp Williams, who had been the leader of the Democratic Party in the U. S. House of Representatives. Williams was wealthy and highly regarded, although he had a fondness for alcohol and was accused of being drunk on the floor of both the House and Senate on more than one occasion.

A preferential primary was held, which Williams only barely won, allowing him to represent Mississippi in the Senate.  Fortunately for James K. Vardaman, Mississippi’s other United States Senator, Anselm McLaurin conveniently died.  The new senator would be selected by the Mississippi legislature and the fight would be a wild one.  Most acknowledged that Vardaman’s personal popularity made him the clear favorite and the former governor confidently expected to be elected, but amidst wide spread charges of bribery, Vardaman lost to wealthy Delta lawyer and planter LeRoy Percy.

As to the charges that Percy won the nomination through the use of money, it seems quite credible.  State Senator Theodore Bilbo, who was soon to rise to prominence as a Vardaman supporter, cheerfully admitted to taking a bribe from the Percy forces.  Bilbo was condemned by his State Senate colleagues, but escaped being expelled, much less imprisoned.  Bilbo claimed he took the money to prove beyond doubt the supporters of LeRoy Percy were attempting to buy the senatorial seat.

The election of a lawyer who represented banks and railroads was a horrific thing to both James K. Vardaman and his redneck supporters.  As the last senator chosen by the Mississippi legislature, LeRoy Percy had to face the voters and Vardaman was already running hard.

Furious that he had been thwarted in the legislature, James K. Vardaman sought the senatorial nomination in 1912 and spoke all across Mississippi.  The White Chief denounced the action of the legislature and its beneficiary, LeRoy Percy.

While in the Senate, James K. Vardaman did not cease making the highly provocative remarks he had become famous for, although the Mississippi senator seemed to be fully cognizant of what was supposedly dignified for a senator of the United States.  Still, being a senator did not diminish Vardaman’s rhetoric of racial hatred.  Vardaman had once said that were it necessary to save Mississippi by lynching every Negro in the state, it should be done.  Vardaman’s description of Negroes was equally repellant.

Senator James K. Vardaman could likely have remained in the United States Senate until death claimed him, but the perverse nature of Vardaman’s character and refusal to abandon his own convictions interfered.

Even his opponents acknowledged that James K. Vardaman was certainly the most popular political figure in Mississippi.  Vardaman presided over an informal organization that dominated much of Mississippi’s politics and many offices were occupied by open supporters of the senator.  His election to the United States Senate in 1912 was the pinnacle of his career.

Vardaman’s election to the United States Senate coincided with that of Woodrow Wilson as President.  Vardaman was largely supportive of President Wilson, although the two were never close.  Wilson ran for reelection on the slogan “He Kept Us Out of War” in 1916 and only barely managed to squeak by former Supreme Court Justice Charles Evans Hughes.  By 1917 it was becoming increasingly more difficult for Wilson to keep the United States out of the World War raging in Europe.  Former President Theodore Roosevelt, still highly popular, relentlessly castigated Wilson in speeches for his timidity in not entering the war, especially after several Americans lost their lives when a German submarine sank the liner Lusitania.

Senator Vardaman, despite coming from a fervently patriotic state as Mississippi, proved to be reluctant to enter the war.  Even when President Woodrow Wilson finally capitulated and asked the Congress for a declaration of war, Vardaman refused.  James K. Vardaman was one of a handful of senators who resisted the call for war.  It was that stand on principle that ended James K. Vardaman’s political career.

A few of the other senators who had refused to vote for a declaration of war, notably Wisconsin Senator Robert LaFollette and Missouri Senator William J. Stone, managed to survive their refusal to vote to send American troops to Europe to fight in the World War.  All of the little band of senators who would not vote for war were harshly and hysterically condemned; Senator LaFollette was frequently referred to as “the Kaiser’s senator”, a reference to the German Emperor Wilhelm II.

Senator Vardaman intended to seek reelection to a second term in 1918 and his stance on the war drew a serious opponent.  Congressman Byron “Pat” Harrison had first been elected to Congress as a firm supporter and ally of James K. Vardaman.  In 1918 Harrison sang a different tune, verbally skinning the senator for his refusal to go to war.

Senator Vardaman defended himself as best as he could, but was buried beneath a tidal wave of disapproval.  Vardaman returned home to Mississippi to resume his editorial chores, but he had not given up hope of making a political comeback.  When Senator John Sharp Williams announced he was retiring in 1922, James K. Vardaman declared his candidacy for the United States Senate yet again.

The years had not been kind to the former Senator and supporters noticed he appeared to be a shell of his former self.  Once unrivaled upon the political stage as a speaker, his voice seemed to have failed him in 1922 and while he might be found sitting upon the stage, the speaking was done by surrogates, such as Theodore Bilbo.  While never diagnosed, Vardaman may well have been suffering from Alzheimer’s, as some family members noted the former senator seemed to be entering senility.

Most gave Vardaman little chance to be elected, but with the war fever past, Vardaman lead the first primary handily.  Shocked, Vardaman opponents rallied around colorless Congressman Hubert Stephens in the run-off election.  Stephens barely managed to beat Vardaman, winning the run-off primary by only 9,000 votes.

The 1922 election was the last political battle fought by James K. Vardaman.  Frequently careless with his money, Vardaman found himself in an embarrassing financial position.  He and Mrs. Vardaman moved in with one of their children and lived in Birmingham Alabama.  Senator Vardaman retreated more and more into the shadows as his senility took hold of him and it was in Birmingham that the White Chief died on June 26, 1930 at age sixty-eight.