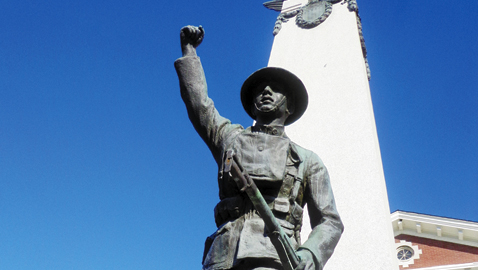 There are no veterans left alive from the War to End All Wars. This year is the 100th anniversary of World War I and there are few reminders of that struggle locally except for one figure that stands in front of the Old Knoxville High School. The former city school is being renovated for senior living and developer Rick Dover has promised, among other things like a mini-school museum inside, to preserve the  Doughboy Statue that stands guard there.

On April 6, 1917, with Europe already at war, the United States declared war on Germany. On June 26 this year it will be 100 years since American troops joined the battle by landing in France.

In Knoxville the Third Tennessee Infantry was a volunteer organization when President Woodrow Wilson called National Guard units into federal service. After service along the Mexican border the local infantry returned to be mustered out but were recalled and federalized. They were trained at Camp Sevier, South Carolina and became the 117th Infantry of the 59th Brigade.

That year the regiment had more than 2,000 volunteers and another 1,600 drafted men were added. More than 350 of the men were chosen for special duties and transferred to other units. Their loss was supplemented by 500 men from Middle Tennessee.

In May of 1918 the men were taken to England and then to France where they served under British forces. There they trained in trench warfare. Shortly after proving themselves the troops went under American command. Later the Infantry served on the Hindenburg line in direct combat with the German Army.

The Doughboy Statue was dedicated in 1922 with General John Pershing speaking. More than 7,000 people attended the ceremony.

The base of the statue lists the various awards and the names of the soldiers killed during the conflict.