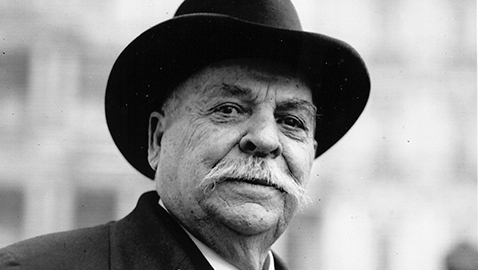 By Ray Hill
Governor Albert H. Roberts, first elected in 1918, was having a difficult time winning reelection in 1920. Tennessee had traditionally given governors a second two-year term, save for the most controversial or incompetent. Roberts had been an able enough administrator, but had proven to be rather hapless when dealing with legislative matters. Roberts also made the mistake of attempting to raise enough revenue to keep Tennessee on a sound fiscal basis, but his taxes proved to be highly unpopular with Tennesseans.

Roberts was being challenged by the Democratic primary by Colonel W. R. Crabtree of Chattanooga. The Colonel was a very conservative Democrat and gave Roberts the devil over taxation. By the end of June, some of Crabtree’s supporters believed the Colonel was making a race of it. Yet there were signs Crabtree’s campaign was not catching on; the Nashville Tennessean reported when Crabtree spoke in Franklin County, where he had been born, the crowd “almost” filled up the courtroom. When Crabtree spoke in Lynchburg, the best the Tennessean could say was the candidate drew a “small, but enthusiastic” audience. The Tennessean offered the excuse the meeting had “been little advertised and few knew” Crabtree was coming to speak.

While Crabtree opened his campaign in Murfreesboro, Governor Roberts spoke in Brownsville. Roberts defended his tax program and laid out the deficiencies in Crabtree’s plan. Roberts said Crabtree “proposes the borrowing of money and the holding of a constitutional convention to adopt tax amendments only, or the adoption of a tax commission representing every industry and interest to be taxed.” Roberts pointed out his administration had been endorsed by the Tennessee Democratic State Convention and he stood squarely on the platform adopted by Volunteer State Democrats. Roberts noted Colonel Crabtree rejected that same platform.

While campaigning in Lewisburg, Colonel Crabtree shouted he would be elected the next governor of Tennessee and he would “send to oblivion the maker of this infamous, unjust and ridiculous tax law.” Crabtree amused his audience by telling the story of the young man who received a telegram his mother-in-law had just passed away. The mortician wondered whether the family wanted her remains embalmed, cremated or buried. The young man quickly wired back, “Embalm, cremate and bury. Take no chances.”

Crabtree attempted to take advantage of the turmoil surrounding calling the state legislation into special session to ratify the Nineteenth amendment to the Constitution, giving women the right to vote. The Colonel offered to suspend his own speaking campaign, if the governor would end his own, while the legislature decided the question. Just days later, Crabtree was issuing a statement from his campaign headquarters he was not withdrawing as a candidate. “Yesterday it was published I was going to withdraw,” the statement said, “acting on the advice of my physician on account of high blood pressure and I was to have no more speaking dates.” Saying there was not “a scintilla of truth” to his withdrawing from the gubernatorial campaign, Crabtree denounced his political enemies. The Colonel boasted, “Under no possible circumstances would I withdraw from this race for governor which I have already won.” Crabtree was careful to say his forthcoming victory was “not personal to me”, but rather due to the “almost unanimous belief in the principles upon which my candidacy is based.” Evidently, Colonel Crabtree thought virtually every Democrat in the State of Tennessee shared his disapproval of Governor Roberts.

The Tennessean carried a special story on July 3, 1920 speculating, according to “conversation” in Jackson County, that particular county would be the best in the state for Colonel W. R. Crabtree. Some believed Crabtree would receive 80% of the vote in Jackson County. Much of the basis for the speculation of Crabtree’s popularity, according to the Tennessean was due to the anger of local farmers with Governor Roberts’ tax program. For all the speculation, it was yet another delusion, as when the election returns came in, Governor Roberts actually carried Jackson County, albeit it only barely. Roberts won 476 votes to 434 for Crabtree. Similarly, the Tennessean estimated Crabtree would carry Truousdale County by a majority of two or three to one. Once again, Roberts carried Trousdale, but only barely, 334 votes to 319 for Colonel Crabtree.

As the primary election approached, Roberts stoutly defended his tax program and appealed for a second term. Crabtree’s bluster and misplaced self-confidence seemed egotistical. The results of the primary election gave Roberts a solid victory, winning 67,886 votes to 44,853. It was a decisive victory, yet there were some warning signs for the governor. Crabtree actually carried three of Tennessee’s four big counties: Shelby, Davidson, and Hamilton, losing only Knox County.

Alf Taylor won the Republican nomination over Jesse Littleton and it soon became apparent Tennessee Democrats were going to have to scrap to remain in office. By September, Taylor traveled to Nashville to open his statewide headquarters at the Maxwell House Hotel and map his strategy for the general election. Later that month, Congressman J. Will Taylor, no relation to the GOP gubernatorial nominee, was predicting Alf Taylor would be elected governor. Congressman Taylor also said he believed Warren G. Harding, the Republican nominee for president, would carry the Volunteer State. Opening his campaign in Silver Point, Tennessee, Taylor lambasted A. H. Roberts’ administration of the state government and called for the repeal of the tax assessment law passed by the legislature at the behest of the governor. Taylor took a populist approach to the assessment law, claiming it harmed farmers and small property owners and was hardly noticed by big businessmen and bankers.

An able orator, Taylor spoke mostly in generalities and the Tennessean grumbled the candidate skipped past the “suffrage issue.” Both candidates began to tour the state in earnest after giving their opening speeches.

With the general election less than a month away, Governor Roberts was speaking in East Tennessee while Alf Taylor spoke in West Tennessee. Despite the Tennessean’s complaint that Alf Taylor had not addressed the issue of suffrage, women were taking part in the campaign. Mrs. Claude D. Sullivan busily organized women for the Democrats, while Mrs. James S. Beasley did the same for Republicans. Both women served as the vice chairman of their respective political parties. Mrs. Sam Phillips was utilized as a speaker in Memphis, Nashville and a few smaller cities.

Governor A. H. Roberts was further hampered in the general election by his somewhat colorless personality, while Alf Taylor was drawing large crowds with his “Taylor Quartet”, composed of his sons Nat, Alf, Benjamin, and Robert. Taylor also traveled the state with his hunting dog, “Old Limber”, and proved to be an entertaining storyteller who could easily delight his audiences. Democrats were nervous with women voting all across the country for the first time and the fact presidential nominee James M. Cox, governor of Ohio, was running on a platform calling for American participation in the League of Nations. The administration of President Woodrow Wilson, who had suffered a major stroke and remained in the White House, was no longer widely popular with the people. Many Americans were tired of foreign entanglements after World War I and disliked the notion of the United States joining the League of Nations and many were sympathetic to Harding’s call for a return to “normalcy.”

Yet Roberts gamely defended his administration while campaigning. “I assume full responsibility for my share in the state administration,” Roberts cried. “I call upon Colonel Taylor to advance a workable substitute. He must either put up or shut up.” Worried that Taylor’s relation to his late brother, Robert Love Taylor, might help the GOP nominee, Roberts barked that “every tub must stand on its own bottom” and accused the Republican candidate of trying “to ride into office on the coat tails of his dead brother.” Speaking in Winchester, Governor Roberts derided Taylor’s gubernatorial campaign as nothing more than a “sort of minstrel show.”

As Election Day neared, some labor officials believed Alf Taylor would carry Shelby County. Democrats retorted Governor A. H. Roberts would win reelection with one of the greatest majorities in the state’s history. Shortly before the election, the Nashville Tennessean published an editorial recognizing the strength of “Uncle Alf” Taylor, exhorting Democrats, “There is no valid reason for a Democrat to split his ticket in favor of Alf Taylor, whose record is negligible and who has sought to rally all the elements of discontent to his standard.” The Tennessean was confident “Democrats will vote their ticket straight.”

Alf Taylor’s campaign received a boost when he won the endorsement of organized labor’s Nonpartisan League. The League, based in Chattanooga, also endorsed the reelection of Democratic Congressman John A. Moon. Governor A. H. Roberts clearly recognized Taylor’s campaign was picking up support. The tone of Roberts’ speeches changed as he stepped up his attacks on his opponent. Roberts charged that Taylor was “running away from him”, noting the GOP candidate cancelled a speaking engagement in Murfreesboro after discovering the governor was to speak there as well. Roberts claimed he was not against organized labor and accused Taylor of attempting to win the support of the more radical elements of labor by making promises he knew he could never fulfill.

As election returns began to trickle in, the Tennessean blared in headlines Democratic nominee James M. Cox would carry the state, while acknowledging the governor’s race was close. The Tennessean also trumpeted Congressman Cordell Hull had been reelected “by good majority.” The headlines were wrong on every count. Alf Taylor defeated Governor A. H. Roberts, Warren Harding carried Tennessee, and Democrats lost three congressional seats, including that held by Cordell Hull. The Tennessean confessed, “Due to the presence of thousands of women at the polls, and an extremely heavy vote by the men, the counting and tabulation of the returns was extremely slow.” Perhaps even more disturbing were reports that the expected heavy majorities traditionally enjoyed by Democratic nominees in Middle Tennessee were down. A day later, the Tennessean noted the wreckage of the Democratic Party’s fortunes in the 1920 election, referring to the “storm” which swept away all before it. The election witnessed a tidal wave all across the country as even former Speaker of the House Champ Clark was beaten in his Missouri district by an unknown Republican. Taylor and Roberts divided the vote in Tennessee’s four big urban counties. Alf Taylor carried Hamilton and Knox Counties handily and just barely lost Shelby County. Governor Roberts managed to win Davidson County, but Taylor tallied a big vote in an ordinarily Democratic stronghold. Alf Taylor won 229,143 votes to A. H. Roberts’ 185,890 votes. Taylor ran ahead of Warren Harding who narrowly beat James M. Cox in Tennessee. Harding polled 219,829 ballots to 206,558 votes for Cox. Congressman John A. Moon of Chattanooga lost to Republican Joe Brown while Cordell Hull lost to GOP contender Wynne F. Clouse by less than 300 votes in Tennessee’s heavily Democratic Fourth District. Republican Lon A. Scott beat Democratic nominee Gordon Browning for a seat in Congress in West Tennessee’s Eighth District by 659 votes.

Tennessee Democrats were stunned by their losses and the 1920 election would remain the high tide of Republican success for fifty years. Governor A. H. Roberts ran significantly behind the rest of the Democratic ticket. Roberts would return to his law practice and while he expressed an occasional interest in holding political office, he would never again put his name on the ballot.