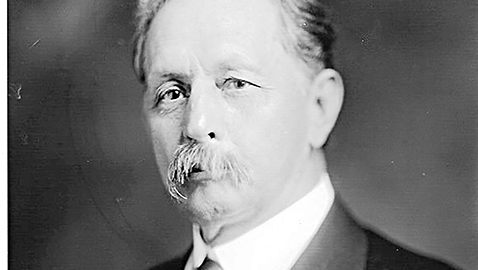 The race for the Democratic nomination for the United States Senate in Tennessee in 1924 came down to three men: the incumbent senator, John Knight Shields, General Lawrence D. Tyson and former state Supreme Court justice Nathan L. Bachman.  All three were from East Tennessee; Shields lived on his estate “Clinchdale” in Grainger County, while Tyson lived in Knoxville and Bachman hailed from Chattanooga.  While all were Democrats, they were very different men.  Shields, small and wiry with a bristly moustache, was a poor public speaker and was himself a former jurist, having served as Chief Justice of the Tennessee State Supreme Court.  Shields was a man of strong convictions and more stubborn than a blind mule.  Tyson, a former general in the Army, at sixty-three could have passed for the Hollywood version of a general or U. S. senator.  Tall and erect, still possessing his military bearing, Tyson had a full head of snow-white hair, along with a neatly trimmed moustache.  Quite wealthy, Tyson had his finger in a variety of business pies, including textile mills and coal companies and was the owner and publisher of the Knoxville Sentinel.  Nathan Bachman was an amiable fellow, a masterful storyteller, prized and admired by his many friends.  Always somewhat rumpled in his appearance, Judge Bachman had never failed to point out General Tyson’s wealth; what he failed to mention was the fact his wife, Pearl, was a member of the fabulously wealthy Duke family from North Carolina.  Judge and Mrs. Bachman maintained a beautiful home on Signal Mountain in Chattanooga.  All three candidates for the Democratic nomination were men of substance; Senator Shields’s estate in Grainger County was reputed to be surrounded by some 8,000 acres.

Tennessee Democrats had fought some excessively bitter elections through the years and while the candidates were free with their criticism of one another, it was nothing like the fiercely fought campaigns for U. S. senator in 1915 and those campaigns surrounding the governorship of Malcolm Rice Patterson.  Senator Shields seemed immune to criticism, supremely confident he was right in his convictions.  Judge Bachman seemed to take criticism in stride, thinking it merely part of the process of campaigning.  General L. D. Tyson, successful businessman and soldier, seemed quite thin-skinned, unused to criticism of any kind.   Tyson truly resented the jibes of his political opponents and seemed to take them personally.

Both Bachman and Tyson had formally opened their drives for the Democratic nomination, while Senator Shields had yet to officially kick off his own campaign with less than a month before the primary election.  General Tyson, speaking in Jackson, Tennessee, took the opportunity to lambast the incumbent for the senator’s failure to declare his own platform.  “Is the Senator now ready to announce that he is a Democrat and stands upon the Democratic platform as adopted in New York?” Tyson wondered.  The General pointed out the platform adopted at the Democratic National Convention in New York had paid “a glowing tribute to Woodrow Wilson”, who had died February 3, 1924.  Tyson reminded his listeners the Democratic platform stated, “We affirm our faith in those ideals and pledge ourselves to take up the standard” of the late president.  Tyson bore down on the plank that pledged Democrats to support the League of Nations and the World Court.  Shields had been an open opponent of Wilson’s Treaty of Versailles and had supported a series of reservations promoted by Massachusetts Senator Henry Cabot Lodge, a Republican.  Tyson claimed the failure of the U. S. Senate to ratify the Treaty of Versailles and join the League of Nations had hurt Tennessee farmers as it had “aided in ruining our agricultural prices” as well as “curtailed our foreign markets.”

“I wish to ask Senator Shields if he is proud of his part in impairing our self-respect at home and injuring our prestige abroad?” Tyson cried.  “He is advertising himself as being a great friend of the farmers”, a notion the General scoffed at considering the senator’s record on foreign policy.  “Is the Senator ready to say that he is for the League, or does he still repudiate it?” Tyson asked.  Naturally, General Lawrence Tyson assured his audience, he was in thorough accord with the platform adopted by the Democratic National Convention.

While L. D. Tyson and Nathan L. Bachman pressed their campaigns for the senatorial nomination by speaking all across the state, Senator John K. Shields bought bigger and more newspaper advertisements lauding his own record in the Senate.

Perhaps because he had been so sorely stung by the criticism of his own candidacy, L. D. Tyson stepped up his attacks on his two opponents in the Democratic primary.  Noting both Shields and Bachman had served on Tennessee’s Supreme Court, the General had ruefully concluded the high court had become a hotbed of political activity.  Tyson said Shields had used his seat on the Supreme Court to direct his own successful senatorial campaign in 1913 while Bachman, who had been elected to an eight year term on the Supreme Court, had “broken his contract” with the people of Tennessee in order to run for the U. S. Senate.  Of course Tyson did not acknowledge the fact Bachman would have certainly been castigated for retaining his seat on the Supreme Court and seeking election to the United States Senate.  To prove his claim the Tennessee State Supreme Court had become politicized, General Tyson said the Bar of Alabama “no longer publishes Tennessee reports, declaring it is a ‘political court’.”  Tyson cautioned Tennesseans to carefully consider “the manner in which they have tried to use the supreme court as a political football.”

Long after both L. D. Tyson and Nathan Bachman had made their opening speeches of the 1924 campaign, Senator John Knight Shields delayed his own political opener until July 16.  Speaking in Murfreesboro, Tennessee, the senator spoke before a crowd that “comfortably” fit into a local courtroom.  Staying at the Jordan Hotel, Senator Shields received callers before going to the courthouse to speak.  Perhaps answering General Tyson’s question as to whether the senator endorsed the platform adopted by the Democratic National Convention in New York, the senator said he approved of the platform document, calling it “broad and progressive.”  To the astonishment of some, Shields went so far as to declare he had been vindicated by the actions of the Democratic National Convention in his opposition to the League of Nations.  Shields dismissed the notion he had somehow betrayed the late President Woodrow Wilson, noting the federal government was composed of three separate and distinct branches.  Senator Shields said the executive should never dominate the legislative branch of the government, nor should the legislative branch of the government attempt to dominate the executive.  Shields took pains to explain his opposition to the Treaty of Versailles as written, noted he was hardly the only Democratic senator to oppose the treaty, and pointed out he had faithfully supported the war measures proposed by President Wilson.  Shields strongly supported the idea of developing Muscle Shoals to provide fertilizer for farmers and power for the South, as well as turning over the enterprise to industrialist and automobile manufacturer Henry Ford.  Shields said he was opposed to the idea of the federal government operating such “a great project”, a notion which would later become the genesis for the Tennessee Valley Authority.  Shields spoke of his record of support for the laboring man and stated he was in favor of collective bargaining.  The senator also advocated greater support for education, but was cautious in saying the state and federal governments should operate separately in the field of education.  While Shields “deplored” the personal attacks made upon him by his opponents, the senator sniffed Tyson and Bachman prattled on about issues that had already been decided.  Shields was largely in favor of states’ rights rather than intervention by the federal government, which he clearly saw as encroachment on the part of the federal government.  Senator Shields took the time to read endorsements by Democrats, attesting to his party regularity and leadership.  Shields did at least acknowledge he had not traveled across the state perhaps as much as he should have, saying he regretted he had been preoccupied the past twenty years with the public’s business, which prevented him from meeting and getting “acquainted with the people of Tennessee” as he would have otherwise liked.  Senator Shields also decried that taxation, due to paying for the cost of the World War and aiding other countries, had increased “in the last decade more than that of any nation in the world, save only one.”  Shields blasted the tariff policies of the Republicans, which aggravated an already precarious economy with “agriculture prostrated” and “the cost of living a burden from which no citizen could escape.”

Following his speech, Senator Shields returned to the Jordan Hotel and later attended a reception in his honor, where friends could come by, exchange small talk and shake hands.  Shields bitterly remembered his 1918 campaign, recalling, “When I was a candidate for the Democratic nomination in 1918, the majority of the press, all strongly pro-Wilson, warmly supported me and editorially stated that ‘I had made an able Senator and consistently supported the Democratic administration.’”  Shields pointed out just before the 1918 election, Homer Cummings, Chairman of the Democratic National Committee, who was a “close confidential friend of Mr. Wilson” had written a letter of support for his candidacy.  What Shields failed to mention was he had been the Democratic nominee at the time, not competing for the senatorial nomination against Governor Tom C. Rye.

General L. D. Tyson boldly invaded Rutherford County after Senator Shields formally opened his reelection drive in Murfreesboro.  Greeted by an enthusiastic reception committee at the train station, Tyson was promptly escorted to a local hotel where he received a steady stream of callers.  Growing increasingly confident, General Tyson began to exhibit something of a sense of humor on the campaign trail.  Noting an article appearing in the Nashville Banner allegedly written by a farmer, Tyson quipped, “I immediately suspected the author was a Republican, for I have known no Democratic farmer to take such an interest in the senator’s reelection, but it is known that every Republican wants him reelected.”  Tyson told his audience that before coming to Murfreesboro, he had heard the “political bosses had the election ‘sewed up’ for their particular candidate.”  Tyson retorted, “I believe the people of Rutherford county are too patriotic to be led to the polls by any boss.”  Tyson’s statement was greeted with loud applause.

For the many ladies in the audience, Tyson said he had supported suffrage for women for no less than thirty-five years and if elected to the Senate, would continue to work on the behalf of women.  “And the women are going to vote for me,” Tyson predicted.

It was a stellar performance by a candidate who had far less political experience than either John Knight Shields or Nathan Bachman.  As the General departed Murfreesboro, one new admirer murmured, “It is evident that General Tyson is the people’s candidate.”

The “people’s candidate” hurried on to Smyrna and toured much of Rutherford County for the remainder of the day.

Just after General L. D. Tyson left Rutherford County, the Clarksville Leaf-Chronicle announced its endorsement of Senator John Knight Shields.  In an editorial entitled, “The Thinkers Are Not Deceived”, the Leaf-Chronicle made the case for reelecting Senator Shields.  According to the Leaf-Chronicle, John K. Shields was the thinking man’s candidate.

There was more thinking to do as the primary election approached.