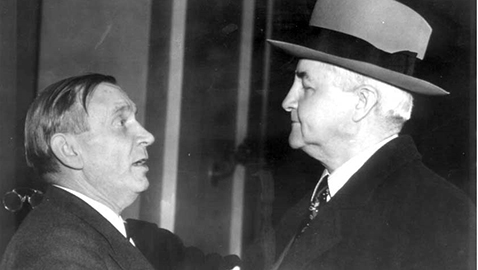 With just weeks away from Election Day, the three candidates competing for the Democratic nomination for the U. S. Senate, incumbent John Knight Shields, General Lawrence D. Tyson, and Nathan L. Bachman, picked up the pace of their respective campaigns.  Shields had delayed officially opening his campaign until July 16, speaking in Murfreesboro, Tennessee.  The increasingly confident General Tyson hurried to follow the senator into Rutherford County.  A day later, the Clarksville Leaf-Chronicle announced its endorsement of Senator John K. Shields.  The Leaf-Chronicle declared Shields to be a statesman, motivated by the highest ideals, including “sincerity and candor”, and the senator was not one to appeal “to passion or prejudice.”  The Leaf-Chronicle was convinced the campaigns of General Tyson and Judge Bachman were rife with just such appeals to both passion and prejudice in an attempt to deceive the voters of Tennessee.

The central theme of the race for the Democratic nomination for the U. S. Senate was John Knight Shields’ failure to support the League of Nations, a cherished hope of the late President Woodrow Wilson.  The fight over the Treaty of Versailles had become a referendum on whether or not John K. Shields had been an opponent of the Wilson administration.  The Leaf-Chronicle logically pointed out there had already been a national referendum on American participation in the League of Nations.  The Democratic presidential nominee in 1920, Ohio governor James Cox, had ardently supported American entry into the League, while the GOP nominee, Ohio senator Warren Harding, had urged a return to “normalcy.”  Harding had crushed Cox in the presidential election.  The Leaf-Chronicle said in its editorial, “If the people of this country had favored the League, Cox and not Harding would have been elected president.”  It was the Leaf-Chronicle’s opinion, “The League is as dead as King Tut.”  The effort by former Wilson Cabinet member Newton D. Baker to “fasten” the League’s “corpse on the Democratic party” during its New York National Convention had been “defeated by a two-thirds vote.”  The Leaf-Chronicle believed General Tyson and Judge Bachman were trying to deceive the people of Tennessee by raising the issue of the League of Nations.  “Why are they not sincere and truthful enough to come square and bolt the recent Democratic platform and declare that they are for the corpse of the League of Nations?” the Leaf-Chronicle wondered.  As to Tyson’s excoriating Shields for his opposition to the soldier’s bonus (a stance shared by future president Franklin D. Roosevelt), the Leaf-Chronicle snarled the senator’s position was one of refusing to give the taxpayer’s money “to able-bodied men able to earn a livelihood themselves.”  The Leaf-Chronicle believed, “Many democrats are with Senator Shields on that point.”  The editorial concluded that the senator’s recent candid speech and independent course in the Senate “is making friends for him everywhere among thinking people.”

General L. D. Tyson traveled to Winchester to press his campaign for the Democratic nomination.  Judge Bachman had opened his own senatorial campaign in Winchester, but it was obvious the General commanded more local support.  As usual, Tyson was introduced to the crowd by a veteran.  “This is the first time an ex-serviceman has presented himself for a big state office and I know that the same people who have been honoring those who have fought for the Volunteer State in the past are going to pay their respects to the ex-servicemen of Tennessee by placing General Tyson in the United States Senate,” J. Polk Ikard cried.

Ikard related he had served under Tyson in camp and on the battlefield, and related the General had always been deeply concerned about the welfare of his soldiers.  Tyson, according to Ikard, always made sure his men had adequate clothing, food and any other necessities, as well as whatever other comforts he could secure for his troops.  One spry Confederate veteran grabbed General Tyson’s hand and blurted out, “I have five votes in my family for you!”  During his speech, Tyson chided Senator Shields, who he claimed would be delighted to run on any platform adopted by the National Democratic Convention.  Shields, Tyson said, was all too willing to “ride into office on any platform the Democrats might propose, and if elected would ride off in all directions disregarding the party mandates.”  Tyson hammered home his criticism of Shields and the senator having voted against the wishes of Woodrow Wilson with reference to the League of Nations.  “Senator Shields says that he voted for the league with fifteen reservations,” Tyson thundered, “but they were not reservations that were satisfactory to Woodrow Wilson and the Democratic Party.”  General Tyson insisted Senator Shields knew the proposed reservations “would have destroyed the League of Nations.”  Tyson said it was a common practice used by legislators whose true intent was to kill off legislation they were against.

General Tyson moved on to Fayetteville, Tennessee where he was presented with a bouquet of roses and an enthusiastic reception.  While he spoke for an hour and a half, newspaper reports indicated he kept the rapt attention of his audience.  Reverend R. A. Largen, who introduced General Tyson, did not let the opportunity go to waste, reminding his listeners “Woodrow Wilson was crucified on a Republican cross”, noting one of those crucifying the late president had been Senator John Knight Shields.  The reporter for the Nashville Tennessean covering the event – – – and the Tennessean was bitterly opposed to John K. Shields – – – wrote Fayetteville had been considered a stronghold for the incumbent, yet described the audience as extraordinarily hostile to the senator.  Tyson began hitting Senator Shields’ absenteeism and failure to vote in the Senate, telling the audience, “A Democratic senator should represent the Democratic party.”  Tyson added, “And if elected to the United States Senate I would not be absent 235 days not fail to vote 177 days, as Senator Shields has done.”  Tyson won fervent applause from the crowd when he pointed out Shields had voted to increase the pensions of former Union soldiers from the Civil War, yet opposed a bonus for those who had fought in the First World War.  Tyson sneered that Shields had posed “as a great friend of the farmers as a reductionist and yet votes to increase the pensions of the Union soldiers.  He was here running true to form by voting for a Republican measure.”

While not a politician by trade, General L. D. Tyson showed some excellent political instincts.  When given the bouquet of roses, the General insisted he wished the flowers to be placed upon the grave of “the noted Tennessee W. T. C. U. leader, Mrs. Selina Moore Holman”, who was buried nearby.

As Tyson’s march toward the United States Senate progressed, it became readily apparent Judge Nathan L. Bachman had little chance of defeating Senator Shields.  The core of the opposition to Shields urged others who opposed the senator to coalesce behind the General’s candidacy.  The argument clearly had some effect.  When L. D. Tyson appeared in McMinnville, Tennessee, hundreds of people had gathered to hear him give his standard hour and a half stump speech.  Tyson larded his McMinnville address with references to the Tennessee Supreme Court, as both Shields and Bachman had served on the high court.  Claiming the state Supreme Court had become a springboard for higher office, Tyson said he very much doubted John Knight Shields could have won election to the United States Senate in 1913 had he not been chief Justice of the Tennessee State Supreme Court.  The subject was likely a delicate one for General Tyson personally, as he had been a candidate for the U. S. Senate before the Tennessee General Assembly in 1913 and had lost to Shields.  There was some evidence Tyson was making inroads with the voters of Tennessee.  One voter approached Tyson and said, “I thought I was for Shields before I heard your address, but now I think I shall support you.”  Another voter pumped Tyson’s hand and cried, “I have been looking for the strongest man to beat Shields and I believe you are the man.”  Both men were prominent in the community.

The General likely thoroughly enjoyed the introduction he was given by Goodloe Warden when he spoke in Manchester, Tennessee.  “America has had her Benedict Arnold, Jesus Christ his Judas, Caesar his Brutus, and the Tennessee Democracy has had her John K. Shields,” Warden bellowed.  Tyson candidly said he believed he would win the votes of 25,000 ex-servicemen in Tennessee and thought each would “control” the vote of at least one other person, making a total of 50,000 votes.  Tyson said he thought he would get another 25,000 votes across the state and if the total vote reached 175,000, neither Senator Shields nor Judge Bachman would be able to win three-quarters of the remaining votes.  Tyson reminded his listeners of Tennessee’s military and political history when he called upon the spirits of John Sevier, Andrew Jackson and Nathan Bedford Forrest to help ensure his election.

As Election Day approached, L. D. Tyson was drawing even bigger crowds as he moved across Tennessee.  While speaking in Crossville, the General was greeted with cries of “No, no, we will not return him to the Senate”, meaning John K. Shields.  As Tyson spoke to the plight of the farmers in Tennessee, some members of the audience yelled, “give it to him, give it to him, we’ve had enough of him in the United States Senate.”

Tyson played his trump card in Crossville, declaring, “It is either Wilson or Shields, which will you accept?”  Another old Confederate veteran approached the General, enthusiastically shaking his hand and promising to deliver ten votes from his immediate family.

Senator Shields was not holding large rallies, preferring instead to move about the state leisurely and disappearing quickly.  Shields visited Dyersburg and walked around town with friends and supporters, shook a few hands and departed for Union City.  Nathan Bachman was speaking to decent-sized crowds, oftentimes touring Tennessee’s smaller cities.  Still, it appeared L. D. Tyson had moved into the lead, with Senator Shields trailing in second place and Judge Bachman running third.

The primary election hovered above Tennessee’s voters as the Knoxville News published an editorial urging Tennesseans to vote Senator John Knight Shields out of office.  The News charged the senator with being too conservative as well as not representing the views of the people of Tennessee.

The attitude of the Knoxville News was shared by most of Tennessee’s Democrats as evidenced by the election returns.  General L. D. Tyson’s strength was immediately apparent as he led the race from the beginning.  Judge Nathan L. Bachman quickly concluded he had no chance of winning the Democratic nomination and conceded the race.  Senator Shields initially stubbornly refused to concede, believing as rural precincts turned in their votes, it was possible for him to overcome Tyson’s lead.  Shields had some reason to be optimistic; the senator had carried Davidson County, lost Knox County to Tyson, while Bachman handily carried his home county of Hamilton.  Bachman also barely carried Shelby County, with L. D. Tyson close on his heels.  Senator John Knight Shields ran a poor third in Shelby County.  Ultimately, L. D. Tyson won the Democratic nomination for the United States Senate by 17,506 votes.  Tyson won a plurality of the vote with just over 41% of the total, yet he was 10% above Senator Shields’ 31% of the vote.  Nathan Bachman won a respectable 26% of the vote.

Contacted at his estate, “Clinchdale”, when it became clear he had lost, Senator John K. Shields snapped, “I have no statement to make.”

Interestingly, all three candidates in the 1924 Democratic primary would serve Tennesseans in the United States Senate; two of them, L. D. Tyson and Nathan Bachman would share the dubious distinction of dying in office.  John Knight Shields would enjoy a long and happy life in retirement on his plantation in Grainger County.