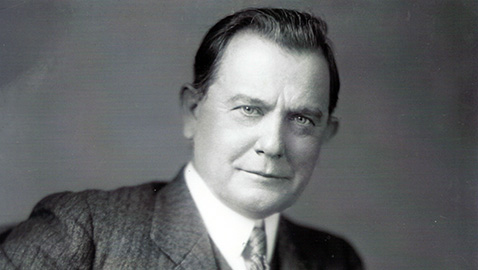 By Ray Hill
Tennessee politics was in flux in 1928 due to the nomination of New York governor Alfred E. Smith as the Democratic nominee for president.  Smith, a cigar-chomping, derby hat wearing product of New York’s Hell’s Kitchen was a pronounced wet who openly favored abolishing the prohibition laws.  Even worse, at least to most Southerners, Smith was a practicing Catholic.

Democrats in Tennessee were wary, having lost the state to the Republicans in 1920 when Warren G. Harding had been the Republican nominee.  That had been the first election where women had been eligible to vote and voters across the nation had resoundingly rejected the idea of continuing the Wilson administration and European entanglements brought about by the First World War.  President Wilson’s crusade on behalf of the League of Nations had worn out the American public.  It had also worn out Woodrow Wilson’s health.  While crisscrossing the country, speechmaking on behalf of the League, Wilson had been stricken with a serious stroke that left him paralyzed on his left side.  From October 2, 1919 until he left the White House on March 3, 1921, Wilson was seriously incapacitated, a fact First Lady Edith Bolling Wilson and Dr. Cary Grayson meticulously hid from the public.

The nomination of an urban Catholic governor brought into question just how the solidly Democratic South would react.  In the 1920 Republican tidal wave, incumbent governor A. H. Roberts, a Democrat, had been swept out of office along with four incumbent congressmen, including Cordell Hull.  Still, the prospect of yet another major effort by national Republicans to carry Tennessee did nothing to discourage infighting by Volunteer State Democrats.  Governor Austin Peay had died suddenly October 2, 1927 of a cerebral hemorrhage and was succeed by Lieutenant governor Henry Horton, who had little political experience.  Horton was determined to win a term in his own right in 1928 and allowed former U. S. senator Luke Lea to dominate his administration.  Unlike Peay, Henry Horton had few scruples in his bid to retain the governorship.  Tennessee’s senior United States senator, Kenneth D. McKellar was running for a third term in 1928, after seventeen years in Congress.  McKellar had been elected to the House of Representatives in 1911 and defeated Senator Lea and former governor Malcolm Patterson in a bitter primary in 1915.  In the 1916 general election, McKellar defeated the Republican nominee, Ben W. Hooper, a former two-term governor decisively.  McKellar won reelection in 1922 overwhelmingly, winning renomination by a huge margin over the spirited opposition of Guston Fitzhugh, a wealthy conservative.  He likewise won the general election easily over GOP nominee Newell Sanders, who had briefly served in the United States Senate by appointment from Governor Hooper.  Senator McKellar was deemed to be a through-going progressive by no less than the New York Times while the editor of the Columbia Herald thought the Tennessean was at least a dangerous radical, if not a socialist.  It was McKellar’s liberal views that caused the wily Luke Lea, publisher of the Nashville Tennessean, to encourage the senatorial candidacy of Finis Garrett, a West Tennessee congressman and Minority leader of the U. S. House of Representatives.  Garrett was also profoundly conservative and he disagreed with McKellar about most public policy.  The Clarksville Leaf Chronicle noted Garrett’s conservatism and dismissed him as “the assistant Republican floor leader” and sniped he served as Minority Leader of the House “by reason of seniority, and for no other reason.”  The Leaf Chronicle declared McKellar’s record was that “of a Progressive Democrat.”  Yet another difference of opinion was quoted by the Leaf Chronicle, stating Garrett had voted for an amendment sponsored by the ultra-conservative Joe Cannon of Illinois, which would have “prevented workers, or take away from organized labor the right to strike.”  McKellar had stood by labor, saying that “organized labor had as much right to protect themselves as organized capital had to protect itself.”

Lea also had an ulterior motive; knowing both McKellar and E. H. Crump, leader of the Shelby County political organization, would not support Governor Henry Horton in the Democratic primary, he realized opposition to the senator would divide the political resources available in challenging his man in the governor’s mansion.

Kenneth D. McKellar was not a typical politician inasmuch as he was always candid with his constituents.  The senator rarely attempted to side-step any issue and would frankly tell those who wrote him that he did not agree with their own opinions.  Politely, McKellar would state his own position and explain how he had arrived at it.  For those constituents who became belligerent, McKellar was not above writing a much less polite missive.  Still, the senator had several advantages going into the Democratic primary.  A bachelor who had no real hobbies save for his work, he paid close attention to issues affecting his state and people.  McKellar’s Senate office became the model for constituent service later credited to Congressmen John Duncan, Sr. and Jr., Jimmy Quillen and Quillen’s predecessor, Carroll Reece.  Every letter from Tennessee was answered the same day it arrived in McKellar’s office.  Senator McKellar would personally visit any government agency on behalf of constituents, rich or poor.  The senator was positively relentless in his pursuit of Tennessee’s fair share and became so good at it his colleagues were left a little in awe of McKellar’s success.  Albert Gore, who finally defeated McKellar in 1952, later recalled the senator was deeply entrenched in Tennessee; there was hardly a person or family for whom the senator had not done a favor.

The Democratic primary was one of those rare elections run on records and issues rather than personalities.  Finis Garrett chastised McKellar for being too liberal while the senator was unapologetic for his efforts on behalf of farmers, veterans, small businessmen, and common folk.  Congressman Garrett was much friendlier to big business while Senator McKellar was highly suspicious of corporations and Wall Street.  McKellar trumpeted his support of the McNary – Haugen Bill, commonly known as the “Farmer’s Relief” bill.  Garrett had voted against it.  McKellar had been one of the leading voices in Tennessee on behalf of giving women the right to vote; Finis Garrett had voted against women’s suffrage at least three times as a member of Congress.  McKellar strongly supported federal aid to highways and had in fact been the father of what later became the interstate highway system.  Congressman Garrett opposed federal aid to highways and education on the grounds of states’ rights.  Senator McKellar supported a bonus for veterans, which Garrett opposed.

While speaking in Lebanon, Tennessee, Senator McKellar outlined the platform adopted by the Democratic National Convention and compared it to his own record as a member of the United States Senate.  McKellar then compared both to Congressman Finis Garrett’s votes in Congress.  The senator pointed out to his audience Joe T. Robinson of Arkansas, the Democratic vice presidential nominee, had voted for the McNary – Haugen Bill.  “I ask you,” McKellar said, “who is at harmony with the Democratic platform as adopted at Houston – – – Mr. Garrett or I?”  Senator McKellar told his listeners with the recent flooding in Tennessee, farmers had enough woes and could ill afford a member of the Senate who was not interested in putting farmers on the same footing as labor.  McKellar was also careful to remind his audience Congressman Garett, aside from voting routinely to increase “bureaucracy”, differed with the Democratic platform on the issues of women’s suffrage, the maternity bill, child labor, water power, federal aid for schools and highways.

A local street preacher momentarily caused a disturbance outside the courthouse, loudly complaining, “Everybody upstairs to hear Senator McKellar!”

In reply to Congressman Garrett’s “taunts” about being a bachelor, McKellar retorted he believed the women folk of Tennessee would vote for him in large numbers even though he admitted he could not persuade one to be his life mate.

As the primary campaign drew to a close, a confident Finis Garrett speculated he would carry every Congressional district in the state “except Senator McKellar’s home district.”

Congressman Garrett could not have been more wrong.  Despite being an able orator as well as handsomely financed, Garrett lost badly.  McKellar handily carried Tennessee’s four big urban counties – – – Davidson, Hamilton, Knox and Shelby.  The final totals gave McKellar 120,298 votes to 64,470 for Finis Garrett.  Senator McKellar’s political strength and personal popularity was reflected inside Garrett’s own Ninth Congressional district.  Finis Garrett had represented his district in Congress since 1905 and out of the nine counties comprising Tennessee’s Ninth Congressional District, McKellar carried four in the area where Garrett ran the strongest in the entire state.

Henry Horton barely eked out a win over former State Treasurer Hill McAlister who had the support of McKellar and Crump, winning by just over 5,000 votes.

Renominated by his party, McKellar supported the entire Democratic ticket and was especially interested in the presidential candidacy of Al Smith.  Ed Crump was also enthusiastic in supporting the Democratic presidential candidate.  The Republican nominee, Herbert Hoover, who had served as Secretary of Commerce throughout the Harding and Coolidge administrations, was making a real effort to peel off votes in the South.

Tennessee Republicans had also nominated a credible challenger to McKellar in the general election.  James A. Fowler was one of the most prominent attorneys in Tennessee.  Fowler’s legal prominence was hardly surprising considering he had served as a special assistant to the Attorney General of the United States from 1908 – 1914 and again from 1921-26.  Fowler argued several notable cases before the United States Supreme Court, or prepared the legal briefs for cases before the high court.  While campaigning for the U. S. Senate, James A. Fowler was the mayor of Knoxville.  Fowler had been the law partner of Edward Terry Sanford, who later served as an associate justice of the U. S. Supreme Court.  Fowler’s legal abilities knew no political party; originally President Theodore Roosevelt appointed Fowler as an assistant Attorney General in 1908 and the following year William Howard Taft reappointed him.  Taft was defeated for reelection in 1912 by Woodrow Wilson and James A. Fowler was asked to remain as a special assistant by the new Attorney General of the United States, James McReynolds (who would also serve on the U. S. Supreme Court).  While serving in the Wilson administration, Fowler wrote the brief and argued the United States v. Chandler-Dunbar Water Power Company case.  That case came to have special meaning for Tennesseans as it was cited throughout the argument of Ashwander v. Tennessee Valley Authority.

Fowler’s brief elective career began in 1927 when he was elected to the Knoxville City Council.  Fowler was chosen by his fellow Council members to serve as mayor and he was reelected to the City Council in 1929.  When his second term expired in 1931, Fowler resumed his thriving law practice once again.

It is doubtful Tennessee Republicans could have nominated a more respectable candidate for the U. S. Senate than James A. Fowler.  Still, Senator K. D. McKellar had little fear of being defeated and while he continued to tour Tennessee, he spent most of his time urging Tennesseans to support the presidential candidacy of Alfred E. Smith.

James A. Fowler, neatly dressed with a shock of white hair and a moustache, opened his fall campaign in Maryville, Tennessee.  The GOP nominee, unlike many in his party, immediately endorsed the idea of government control or ownership of “water power” in the region.  Fowler was critical of Alfred DE. Smith’s position on immigration, saying he feared a “great influx of immigrants from southern and eastern Europe” at the expense of those immigrating from Western Europe.  Nor did Fowler spare Senator McKellar.  “If a genuine Democrat is one who is a Democrat whether the platform be for free trade or tariff, wet or dry, or for sin or righteousness, then my opponent is a Democrat pure and undefiled.”  Fowler scored the New York governor for Smith’s connection with the notorious Tammany Hall political organization and “all of its terrifying record of corruption in the past…”

The 1928 general election for the United States Senate in Tennessee had begun.