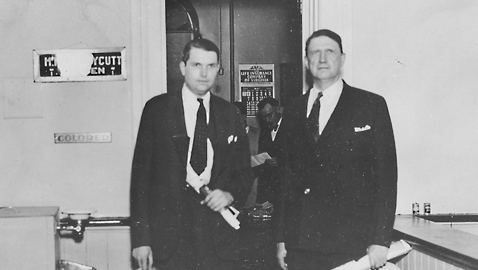 To give one an idea of what life was like during the 1934 campaign, a lamb shoulder roast was 16 cents per pound; bran flakes were 10 cents a box; two pounds of trout fillet was 25 cents.  One store advertised a sale of women’s dresses – – – seersucker, chiffons, linens, and voiles – – – for 98 cents each.

The country was recovering from the Great Depression under the presidency of Franklin Delano Roosevelt.  While far from a land of plenty, things were better and the people knew it.

The campaign for the Democratic nomination for the United States Senate between incumbent Nathan L. Bachman of Chattanooga and Congressman Gordon Browning of Huntingdon grew increasingly heated as the summer reached its peak in Tennessee.

The two men were a contrast in style and appearance.

Bachman was a man of medium height, his hair carefully combed and parted on one side.  Bachman dressed neatly, although his appearance was oftentimes rumpled.  The senator, like his senior colleague, favored bowties, which he usually partially covered with his shirt collar.  A masterful raconteur, Bachman was one of the best-liked men amongst his friends and acquaintances in all of Tennessee.

Gordon Browning’s heavy head of hair was swept back from his forehead, revealing a pleasant countenance.  His was a plain Tennessee face and his laugh was hearty.  Impulsive and bombastic, Gordon Browning was a masterful campaigner, having been nominated for Congress from his own district seven times and elected six.  Browning liked to eat, never missed a barbecue, and his prowess at devouring whatever the featured specialty might be never ceased to amaze his friends.  As a result of his fondness for food, Browning tended towards a bulging waistline.

Browning sought to compare his own twelve years in Congress to the fifteen months Bachman had spent in the U. S. Senate after having been appointed to fill the vacancy caused by the resignation of Cordell Hull to serve as Secretary of State.  Browning accused Bachman of having done little to help the people of Tennessee, while he had worked ceaselessly on behalf of the Volunteer State.

Senator Bachman pointed to his own record of having faithfully voted to support just about every aspect of Franklin Roosevelt’s New Deal.

As an interesting side note, a young Albert Gore was the campaign manager for Gordon Browning’s 1934 Senate race.  Gore would support Browning again in 1936 when the former congressman was elected governor.  The future congressman and senator would be rewarded with an appointment as Tennessee’s Commissioner of Labor.

Gore was certainly effective inside his own Smith County, where Gordon Browning beat Senator Bachman by a better than two-to-one majority.

The Bachman campaign shrewdly used Browning’s own words against him, reprinting a letter the congressman had written to a friend on March 29, 1934.  In the letter, Browning told Alvin Ziegler, Chairman of the Hamilton County Democratic Party, that he realized “that only one Senator should come from West Tennessee.”

Worse still, Browning wrote, “I have no idea of opposing Senator Bachman, and see no reason why his interest and mine should in the least conflict.”

Browning did add that should their interest collide “it would be because of matters beyond my control, or my desire.”

Congressman Browning opined that, “solicitations that have come to me from over the state have made me believe this is my time to run against the senior Senator.”

If there were indeed such solicitations coming to Browning, he greatly exaggerated them.  Later, in an oral history, Gordon Browning admitted he could not get a single commitment from any Tennessean of influence to run against Senator McKellar.

Browning had floated a trial balloon candidacy against the powerful McKellar in early April, saying he had received so many entreaties that he run, he was going to make up his mind after touring Tennessee.

Browning claimed there had been so much “talk about a senatorial race that I got interested and I am down here to find out first-hand whether all the correspondence I have is correct.”

Apparently it was not correct.

The Bachman ad was run extensively in East and Middle Tennessee, asking why Browning had changed his mind and why the congressman now believed both senators should come from West Tennessee.

Browning’s own campaign ads focused more on his insistence that foreign governments who had received enormous loans during World War I pay their debts and vaguely referenced the congressman’s opposition to “monopolies and special interests.”

Those ads concluded with an appeal for folks to vote for Browning if they were in favor of honest and courageous government.

Senator Bachman also used Browning’s own words against him in speeches.  The congressman also made a misstep that allowed Bachman to go ever further.

Browning was feeling the sting of Bachman’s relentless attacks on his congressional record.

“It is true that I came home a few days before adjournment,” Browning admitted, “while the Senate was killing time and I wanted to perform the patriotic service of relieving the state of one who had never turned his hand except to sit in his seat and vote.”

It was an opening Bachman used shrewdly and he took advantage of it immediately.

Campaigning in Middle Tennessee, Senator Bachman told one audience, “Mr. Browning said in a statement issued to the people of Tennessee a few days ago that he left Congress and came back to Tennessee because he considered it his ‘patriotic duty’ to defeat me.

“From Mr. Browning’s own words that statement is proven to be untrue.  He came to Tennessee to try and defeat one of the ablest members of the U.S., Senate, Kenneth D. McKellar,” Bachman said.

“It took Mr. Browning several weeks to find out what every observer in the State of Tennessee knows, that he, or no one else could beat Senator McKellar,” Bachman thundered.  “No other aspirant, so far as I have been advised, has considered it his patriotic duty to perform the feat.”

Senator Bachman wondered “since when has Mr. Browning become the sole dictator and censor of the qualifications and abilities of Tennessee senators?”

“And how long has it been his patriotic duty to undertake to retire them to private life?” Bachman wanted to know.  “It has always been my understanding that this prerogative was inherent in the exercise of the will of a sovereign electorate and not in the seeker for office.”

As Bachman closed his remarks, he chose a highly vulnerable spot to press his opponent.

“In any event, why should he exercise this patriotic duty in seeking to remove two democratic senators who have consistently supported the policies of the administration, while he abandoned his post of duty, for which the people pay him $10,000 a year, in an undertaking to further his political fortunes?”

“There has not been an occasion during his service that his vote was decisive,” Browning declared.  “He has performed no other service.”

To Browning’s accusation that the sum total of his remarks on the floor of the Senate was comprised of a mere twenty-one lines after fifteen months of service, Bachman said he wished to make it known “that I have no idea of using the valuable time of the United States Senate to speak solely for home consumption to help my political fortunes.”

Senator Bachman drove home his point, adding, “Nor will I use this high office to create publicity and notoriety for myself.”

The inference was quite clear.

In his talks across Tennessee, Bachman never failed to tie himself to both Senator McKellar and President Roosevelt.

When announcing his candidacy to win a term in his own right, Bachman noted he and McKellar got along well.

“My relations with Senator McKellar have been pleasant, and by reason of his long experience in the service of the government his advice has been most helpful to me.”

Bachman had said that he accepted the appointment to the U.S. Senate after avowing his support for President Roosevelt.

“I came to Washington pledged to support the policies of President Franklin D. Roosevelt in his heroic and courageous efforts to being about economic recovery of our country.”

Bachman reminded audiences he had tried to keep his pledge and that he worked in tandem with Senator McKellar to produce both benefits and results for Tennessee.

As Senator Bachman hammered home the theme of Browning having left before Congress adjourned for the sole purpose of being a candidate for the U.S. Senate, he raised his level of rhetoric.  While not as forceful as Browning, the senator kept reminding listeners that Browning had failed to cast vital votes that affected “the lives, plans and prosperity of every man, woman, and child in the state of Tennessee and the entire nation.”

Congressman Browning retorted he had certainly not neglected the public’s business by his absenteeism and had kept in touch with the situation through Majority Leader Joseph W. Byrns of Nashville, a claim which Senator Bachman scorned.

Bachman came to upper East Tennessee towards the close of the campaign to make what was referred to as the “keynote” address of his campaign.  The senator addressed the prominent issues of their own platform, which differed little from that offered by Congressman Browning.

Bachman’s candidacy was strongly supported by Senator McKellar, as well as the state administration of Governor Hill McAlister.  Senator Bachman also had the support of the two most powerful urban political machines in the state; that of E. H. Crump in Shelby County and Mayor Hilary Howse’s organization in Nashville.

Even while losing, Gordon Browning made more than a respectable showing.

Gordon Browning would continue to be a factor in Tennessee politics for almost another two decades.  His election to statewide office would prove to be stormy and presage one of the bitterest battles in the annals of Tennessee politics.

Senator Nathan Bachman would be reelected to a full six-year term in 1936 without opposition, but he would only serve three months of that term before dying suddenly of a heart attack.  Nathan L. Bachman would only serve a little more than four years in the United States Senate, but he left behind thousands of admirers and genuine friends who truly mourned his passing.