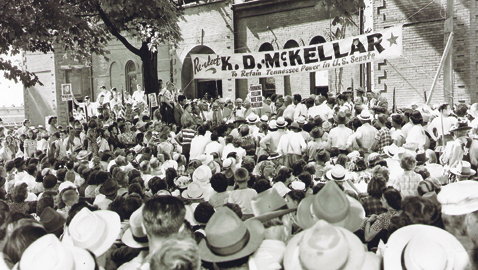 Congressman Albert Gore, forty-four years old in 1952, was poised to challenge Tennessee’s most formidable vote getter, Senator Kenneth D. McKellar, in the Democratic primary. McKellar, eighty-three years old and ailing, remained an imposing candidate despite his infirmities. The longest serving senator in Tennessee’s history, McKellar was well liked by his people and had done countless favors for constituents during his thirty-six years in the United States Senate. McKellar had won reelection in 1946 without ever once having returned to Tennessee to campaign and defeated a serious opponent who had quite nearly beaten Tennessee’s other U. S. senator in 1942.

As Gore recalled in a 1976 oral history, “The late Senator McKellar was a very powerful man.”

Albert Gore said his campaign strategy was carefully planned and executed. He acknowledged McKellar’s success in funding appropriations for the Tennessee Valley Authority and while he did not agree with the senator’s efforts to “dominate” the TVA, he felt he could not criticize McKellar’s record. Albert Gore had served on the House Appropriations Committee and recalled that Senator McKellar had oftentimes been successful in protecting and/or replacing funding for the Tennessee Valley Authority when the House delegation had been unsuccessful. Gore also deferred somewhat to McKellar due to the senator’s age and “the esteem in which he was held.” Gore decided to make no reference at all to Senator McKellar during his campaign.

“Not one time did I call his name during the campaign or criticize him on a single issue,” Gore said.

When meeting with his core supporters, not all of his friends thought his decision a wise one. A young attorney from Kingsport, Bill Todd, was late in getting to the meeting and when he arrived, Albert Gore asked, “Bill, we’ve been discussing the strategy and tactics of my campaign. How do you think I should deal with the problem of my adversary, the venerable Senator Kenneth McKellar?”

“I think you should say he’s too old to cut the mustard,” Todd replied.

It soon became clear that McKellar could not run another reelection campaign from Washington, nor could he wield the gavel of the Senate Appropriations Committee in the Capitol without returning home to campaign personally. Campaigning in person presented some difficulties for Senator McKellar. The senator had trouble with his legs and had fallen repeatedly in Washington, once breaking his glasses and gashing his forehead just above his eye. The McKellar campaign would have to carefully choreograph the senator’s campaign appearances while Albert Gore seemed to be everywhere all at once. Gore later estimated his entire primary campaign in 1952 had cost around $50,000, which he noted would be “inadequate for a commercial” in 1976. In the days before campaign finance disclosures, Gore had no idea what was spent by the McKellar campaign, although he speculated, “I daresay considerably more than that.”

When asked by an interviewer what had made Senator McKellar “so vulnerable” in 1952, Gore laughed and retorted, “I didn’t discover he was so vulnerable.”

Albert Gore said, “It took all I could do” and noted Senator McKellar was “deeply entrenched all over the state.”

There has been a persistent undercurrent in Tennessee political history theorizing E. H. Crump had concluded Senator McKellar could not win and the Memphis Boss abandoned McKellar’s campaign to concentrate upon electing Frank Clement governor. Albert Gore immediately dismissed that rumor, noting, “No, they fought very hard.”

Yet, E. H. Crump did have real doubts about McKellar’s ability to win in 1952 and had urged the senator to retire gracefully. Crump also urged the McKellar leaders to organize in all of Tennessee’s ninety-five counties, but by spring, far fewer counties had been organized than should have been. Many of Senator McKellar’s closest friends and supporters were incapacitated by age and illness, no longer active or had died. Many knew McKellar only by reputation and his visits across Tennessee had grown less frequent, although he almost always returned home to Memphis when Congress was not in session.

McKellar’s personal attention to detail is evidenced by an oral history by Mrs. Nell Aspero. Mrs. Aspero had been deeply involved in organizing the Tennessee’s Beautician’s Association in 1939 and wanted to see beauticians licensed by the State of Tennessee. A bill was introduced in the state legislature and Mrs. Aspero laughingly recalled meeting Governor Prentice Cooper who admitted the Memphis Boss had been putting pressure on him to support licensing beauticians. Mrs. Aspero went to the old post office building in Memphis to meet with Senator McKellar who received her graciously and she left his office a happy woman. Mrs. Aspero was going through law school and McKellar had mentioned should she ever be in Washington, D. C. to come by his office and he would personally introduce her at the Supreme Court of the United States. When Mrs. Aspero arrived at the Capitol, McKellar was ill, but she was contacted by the senator’s younger brother, Don, who was also McKellar’s Chief of Staff and he arranged for Republican Congressman John Jennings, Jr. to escort Mrs. Aspero over to the Supreme Court where she was introduced.

McKellar had done countless favors for constituents over forty years and most of them remembered it, which explained Albert Gore’s comment about the senator being deeply entrenched.

Senator McKellar rarely ever attracted favorable coverage in the nation’s press. TIME magazine in particular always seemed to utilize adjectives designed to show the Tennessean in a bad light. LIFE magazine, which was also owned by Henry Luce, who published TIME as well, immediately came out with an editorial urging Tennesseans not to reelect McKellar.

Many political professionals thought McKellar was lagging behind when the campaign began. Senator McKellar returned home to open his campaign in Cookeville, which was not coincidentally, the largest city inside Albert Gore’s congressional district. Motorcades of hundreds of automobiles traveled from Chattanooga and Nashville to be at the rally. An enormous stage was built with an equally large banner proclaiming, “Reelect K. D. McKellar – –  To Preserve Tennessee’s Power in the U. S. Senate.” Estimates of those attending the McKellar rally ranged as high as ten thousand persons. Country music legend Hank Williams provided the entertainment and much of Tennessee’s political elite were on hand to hear Senator McKellar make his opening address. McKellar’s longtime friend, Sergeant Alvin York, sat on the platform with the senator. Supporters waved posters declaring, “Thinking Fellow Votes McKellar.”

McKellar spoke for almost an hour in an attempt to reassure voters he was able to serve another six-year term in the Senate. In his typically forthright manner, McKellar acknowledged his own greatest liability – – – his age. Senator McKellar indirectly also acknowledged his infirmity, admitting he had “a little rheumatism in my left leg.” But he also reminded Tennesseans of the myriad of projects, jobs and federal dollars he had brought home. Senator McKellar, despite his advanced age, pointed to the future, saying he wished to remain in the United States Senate long enough to see four-lane highways stretching all the way from Memphis to upper East Tennessee. McKellar’s voice was strong and resonant, but an incident occurred that subtly reminded voters of his frailty. Speechmaking in the blistering July sun in Tennessee would parch anyone and when McKellar reached for a glass of water, his hand shook so badly that he was unable to reach his lips. He put the glass down without ever taking a sip.

The event was an all day affair and a fried chicken dinner was served to guests after the rally. A chair was set out for the senator, dressed in a light colored double breasted suit, starched shirt and his usual black bowtie. McKellar sat and greeted old friends and new friends. A pretty young lady held a plate of food for the senator as he munched on a chicken leg.

Congressman Clifford Davis spoke at the opening of McKellar’s campaign headquarters in Memphis at the Gayoso Hotel. Davis praised McKellar’s record of service and noted the senator had brought home more than $4 billion to Tennessee, a staggering sum for the time.

The “Thinking Fellow Votes McKellar” (some said “Thinking Feller Votes McKellar”) signs began popping up all over Tennessee and Albert Gore said that was the most difficult issue he had to deal with during the entire campaign. The inference was why would any reasonable person wish to surrender Tennessee’s considerable influence in the Senate in exchange for a freshman member who would wield little or no power in Washington, D. C. It would take decades before Albert Gore could exercise the kind of influence and power held by McKellar. As it turned out, Gore would serve only half as long as did McKellar.

Gore, vexed by McKellar’s campaign slogan, said he and his wife Pauline put on a pot of coffee, sat down at their kitchen table, pencils in hand, and tried to think of a catchy retort. It was Pauline Gore who came up with, “Think Some More and Vote For Gore.”

Albert Gore, an accomplished fiddle player, entertained voters, played checkers in country stores, appeared on the new medium of television, and spoke everywhere he was invited and in some places he was not invited.

Mrs. Aspero, whose husband became an opponent of E. H. Crump, was a friend of the Memphis Boss and recalled in her oral history McKellar touring the state in an air conditioned bus. Air conditioning was a novelty at the time and to say that Senator McKellar actually toured the state would be overstatement. McKellar made appearances in Knoxville, Chattanooga, Jackson, Memphis, and Brownsville. Senator McKellar’s campaign appearances were frequently inside hotels, as was the case in Knoxville at the Andrew Johnson when he propped himself up on his cane to shake hands with prospective voters. He met friends at the Hotel Patton in Chattanooga, a place he had stayed when first running for the U. S. Senate in 1915. McKellar spoke in the courthouse square in Brownsville, reiterating his theme no one could do more for Tennessee.

Mrs. Aspero recalled, “Senator McKellar was really a very remarkable old gentleman. And he did a great deal for Tennessee. A great deal.”

Yet, Mrs. Aspero added, “I don’t know how many terms he did serve. But he was too old to be sent back. Poor old thing.”

The view held by Mrs. Aspero was quite likely the same opinion held by a majority of Tennesseans. Most people in Tennessee respected and admired Senator McKellar. Albert Gore was careful to note in some of his campaign speeches that should McKellar be retired by the voters, he would enjoy a comfortable retirement with an ample pension.

Albert Gore carried his own Fourth Congressional district, although Senator McKellar carried Putnam County, the site of his campaign kickoff with almost 63% of the vote. Davidson County gave Gore a majority of almost 10,000 votes. McKellar had always done very well in West Tennessee, but Albert Gore began to pile up majorities in many of West Tennessee’s rural counties. Senator McKellar won his own Shelby County, but only by just over 3000 votes. When all the ballots were counted, Gore won by almost 90,000 votes.

William McClanahan had once been one of McKellar’s assistants in Washington, D.C. before being named U.S. Attorney for the Western District of Tennessee. McClanahan had left office after being appointed four times to go into the private practice of law. McClanahan had died of a sudden heart attack at fifty, but his widow and daughter Millie went to the Hotel Gayoso where Senator K. D. McKellar lived and where he maintained his political headquarters. Millie McClanahan recalled the shock and sadness. Few people had truly thought McKellar would lose and the senator sat sadly and put on a brave face.

McKellar congratulated Albert Gore and prepared to end his Senate career. He returned home to Memphis. Defeat could come to anyone after all. Tennessee’s longest serving U. S. senator had been retired by the voters.