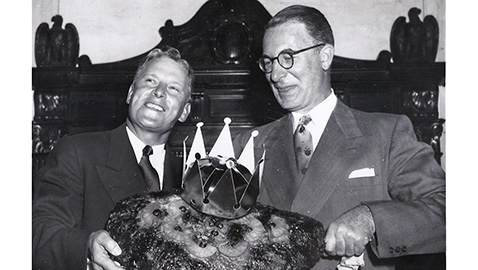 Prentice Cooper, former three-time governor of Tennessee, had been on the comeback trail in a crowded primary election to win the Democratic nomination to claim his residency in the governor’s mansion. While some might have discounted the wealthy former governor’s chances of winning the nomination, nobody really knew just how the race would play out. At least two strong candidates, Buford Ellington and Andrew “Tip” Taylor, worried that Cooper’s candidacy would take votes from their own campaigns. Ellington, Commissioner of Agriculture in the administration of Governor Frank Clement, was thought to be the candidate of the Clement organization, while Taylor served as a judge in West Tennessee and had been elected to a seat on Tennessee’s Railroad and Public Utilities Commission in 1946.

Cooper had long entertained senatorial ambitions and when he withdrew from the governor’s race to challenge incumbent Senator Albert Gore in June of 1958, virtually everybody knew it would be a real race. Cooper had been out of elected office since 1945, yet he was the only person to be elected to three consecutive two-year terms as governor in Tennessee’s modern history. Nor was Albert Gore an especially easy target. Gore had impressive political skills and credentials of his own. Unlike Estes Kefauver’s victory in 1948, Gore had not relied upon a divided primary field to claim victory. Gore had challenged Tennessee’s longest serving United States senator in the primary, Kenneth D. McKellar. McKellar was about as entrenched as any senator could possibly be and McKellar’s alliance with his personal friend and political partner E. H. Crump, leader of the Shelby County political organization, allowed him to dominate Tennessee politics for decades. Gore later recalled most Tennesseans had affection and respect for McKellar, but the senator was eighty-three years old and seeking an unprecedented seventh term as he was ailing. Gore cleverly pitched his campaign on a high plane, refusing to personally criticize the veteran senator and stressing a theme of looking to the future. Certainly McKellar was enormously powerful in the nation’s Capitol, but he was also eighty-three years old, frequently sick and seeking another six-year term. Few Tennesseans disputed the fact K. D. McKellar could do more for Tennessee in the United States Senate, but the forty-four year-old Gore could also accrue seniority in Washington. Gore won and earned the reputation as something of a giant-killer. Gore could be charming when he wished to be and was an excellent speaker and made a favorable impression out on the stump. The diminutive former governor Prentice Cooper was a far less able speaker, nor was he as entertaining on the stump as he maintained a sincere and dignified demeanor while campaigning. Cooper, like McKellar before him, also was credited with a peppery personality and a distinctly fiery temper. The race for the 1958 Democratic nomination for the United States Senate pitted two candidates with very different ideologies against one another. Prentice Cooper was a figure from the past, while Albert Gore still represented the future. Cooper was insistent upon keeping things as they were in Tennessee, while Albert Gore realized Tennessee and the South must make progress for all people. Gore was unabashedly progressive in most of his thinking, while Prentice Cooper was unapologetically conservative.

Much of the 1958 campaign for the Democratic nomination for the United States Senate involved race, a rarity in Tennessee’s political history. Senator Gore charged a local insurance executive, Justin Potter, with attempting to locate a photograph of a young African-American man who had sought to be appointed to the West Point military academy. Gore claimed Potter wanted the picture to exploit for political purposes the charge the young man had been appointed to West Point by the senator. Potter hotly denied the accusation, although Gore was quick to say he had never appointed any African-American youngsters to West Point. The senator did confirm he had nominated two young African-American men from Memphis to attend the Air Force academy. Potter angrily denied Gore’s charge and accused the senator of “demagoguery” and attempting to make political hay of his own. Potter wrote, “Speaking personally, it is my firm conviction that the good people of Tennessee, whatever their race, have no desire to serve as stepping stones for your political ambitions.” Potter did not deny, however, that he was supporting Prentice Cooper. Senator Gore’s retort to Justin Potter was both humorous and effective. The senator invited Potter to join Tennessee’s Democratic party and suggested the executive start by attending a $5 per plate barbecue to be held in Nashville. Gore noted Potter had donated $5,000 to the Republican party during the 1956 campaign, with another $1,000 coming from Potter’s wife. Both Senator Gore and former governor Cooper were on hand at the barbecue, circulating through the crowd, shaking hands.

One resident of Nashville wrote a letter-to-the-editor of the Nashville Tennessean tartly suggesting, “Mr. Cooper should be advised that Mr. Ed Crump is dead.” Yet figures who had departed this world, were raised from the dead for the campaign. Doubtless the late Memphis Boss occupied little of Albert Gore’s thoughts as he packed the family automobile for a trip to Bristol, where he intended to informally kick off his own reelection campaign. Accompanied by his wife, Pauline, and young son, Albert Jr., the senator started his campaign for the Democratic nomination with a breakfast for friends and supporters in upper East Tennessee. Gore also announced he would be opening his state headquarters in Nashville’s Andrew Jackson Hotel. Gore named Harry Phillips, a member of his campaign committee in his 1952 race against Senator McKellar, as his campaign manager for 1958. The old senator had died in 1957, but Phillips called on the thousands of McKellar friends to support Gore for reelection. Phillips reminded McKellar supporters Gore had first campaigned for the U. S. Senate and “only spoke of his opponent in terms of praise and commendation.” Harry Phillips added Gore had spoken highly of McKellar’s “long and distinguished record of public service as a senator from Tennessee.” Most likely Phillips’s reminder to friends of the late Senator McKellar was an effort to undercut Prentice Cooper, who had been strongly supported by McKellar. There was also the subtle reminder to McKellar friends Cooper had done little or nothing to support the senator in 1952.

Albert Gore was also mindful of his potential weakness in West Tennessee and he spoke in Lexington to cotton farmers. It was partly Senator Gore’s answer to Prentice Cooper’s criticism of “global giveaways.” Cooper had been critical of Gore’s support for reciprocal trade agreements, which had been almost scared to the late Secretary of State Cordell Hull, Gore’s political mentor. Hull had been virtually obsessed on the topic of reciprocal trade agreements and even President Franklin D. Roosevelt would almost roll his eyes when the Secretary of State began a lecture on the topic. Gore pointed out trade agreements helped Tennessee farmers, whose products were bought and sold to foreign countries. Without foreign purchases, Senator Gore told his listeners, the cotton program would have been cut back repeatedly. If Gore won the support of cotton farmers, Prentice Cooper had the backing of most textile manufacturers, whose hatred for foreign trade was palpable. Gore readily acknowledged he was running “like a bear was after me.” While speaking in Byrdstown, Tennessee, Gore made the case he was merely following a course first navigated by Cordell Hull. Hull was still revered in many quarters in Tennessee and remembered as America’s longest serving Secretary of State. While speaking at the Pickett County courthouse, Gore reminded his audience many of his votes in the Senate were simply following the principles of Cordell Hull. “I certainly have not turned my back on the people of Tennessee,” Gore said.

Gore had represented Tennessee’s Fourth District in Congress for fourteen years, the same Congressional district Hull had represented for decades. Gore once again defended reciprocal agreements while speaking in Livingston and tied them to Hull. In case anyone happened to miss the point, Senator Gore made a pilgrimage to the log cabin where Cordell Hull had been born. Gore pointed out when Hull had first become Secretary of State and pushed his many reciprocal trade agreements, Tennessee agriculture had been the first beneficiary of Hull’s programs. Gore ticked off textiles, chemicals and wood products as examples of industries that had profited from Cordell Hull’s policies, which he continued to support in the Senate.

While he was certainly labeled a reactionary by the Tennessean, Prentice Cooper recognized the importance of women and named Mrs. W. M. McCallum of Henderson as chairperson of his campaign’s women’s division. Mrs. McCallum had been Tennessee’s mother-of-the-year in 1952, as well as a former president of the American Legion’s auxiliary. Mrs. McCallum directed the activities of the women’s division from Cooper’s state headquarters in the Hermitage Hotel. Some of Cooper’s other appointments were a reminder of the past. Cooper named James Hardin of Greeneville as his campaign manager; Hardin had been Cooper’s chief assistant throughout much his time as governor. Cooper named W. H. Turner as co-chairman of his senatorial campaign; Turner had been an elected member of the state Railroad and Public Utilities Commission while Prentice Cooper had served as governor.

Prentice Cooper formally opened his campaign for the United States Senate in Murfreesboro. Both Albert Gore and Prentice Cooper lived in Middle Tennessee and the area would be a battleground for the two inside the Democratic primary. The sixty-two year old former governor traveled across the state with his family frequently in evidence. Cooper and his wife Hortense were photographed in Memphis with their youngest son, John who was being managed by his mother while his father sat sternly beside her. Even the Tennessean had to admit the youngster was a “scene stealer with long curls.”

Cooper attempted to refute Albert Gore’s argument about reciprocal trade and revived the spirit of the late Senator McKellar. Prentice Cooper attempted to draw a parallel between himself and McKellar, saying the senator would “never have gone around saying there was serious unemployment or breadlines in Memphis.” It was an odd statement, especially as McKellar had worked hard to pour hundreds of millions of dollars into Shelby County and Tennessee during the Depression. An editorial in the Tennessean chided the former governor, saying Cooper apparently had gone “supersonic” as he evidently believed “that with Tennessee voters sound travels faster than light.”

Prentice Cooper’s formal opening of his campaign in Murfreesboro was carried over a statewide network of radio stations. Cooper launched a pointed attack on the record of Senator Albert Gore, centering his themes on civil rights and Gore’s support for foreign aid. “My opponent, on his record, has shown that he stands for integration,” Cooper thundered. “You know that I stand for Tennessee and our Southern way of life.” The former governor claimed Albert Gore’s voting record “is sapping the life blood out of our nation.” Apparently Senator Gore’s constant references to Cordell Hull had resonated with Prentice Cooper, who at one point mentioned “my friend…Cordell Hull.” Saying he believed in fair treatment for all races, Cooper said, “I am unalterably opposed to our children being forced to attend racially mixed schools…The best interests of both races will be served by preserving racial integrity.” It is only fair to say despite what one might think, Prentice Cooper was no rabid bigot in the context of his time. Cooper had represented an African-American man charged with rape when no other lawyer would represent him. Prentice Cooper had also helped the man to escape when the mob was so infuriated they burned down the Bedford County courthouse.

The race between Albert Gore and Prentice Cooper would only become more heated as the primary election drew closer.