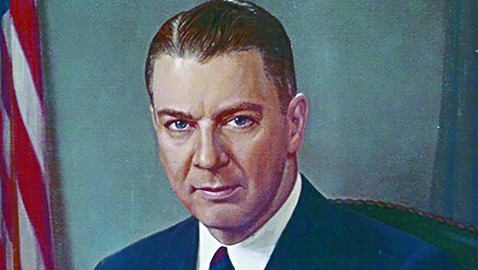 Once a reliably Democratic state, Tennessee was a battleground state in the 1964 election.  Congressman Joe L. Evins of Tennessee’s Fourth Congressional District was designated President Lyndon B. Johnson’s campaign manager for the Volunteer State.  At the time, there was hardly any congressional district in the state more Democratic than that of Joe L. Evins.  Moreover, Evins had been in Congress since 1946 and thoroughly believed in the program being advanced by Lyndon Johnson.  Joe L. Evins shared Lyndon Johnson’s concern for those less fortunate.

Both President Johnson and his Republican opponent, Arizona U. S. Senator Barry Goldwater, would visit Tennessee during 1964.  For the first time in modern history, Tennessee Republicans were making serious bids to win both Volunteer State seats in the United States Senate.  Albert Gore, first elected to the Senate in 1952, was running for a third term and was facing Dan Kuykendall, a young Memphis businessman who was a fire-breathing conservative.  Congressman Ross Bass of Pulaski had defeated Governor Frank Clement for the Democratic nomination to serve out the last two years of the late Senator Estes Kefauver’s term.  Howard Baker, Jr., son of the late congressman from the Second Congressional district, was running hard.

Both Kuykendall (pronounced Kirk-en-doll) and Baker campaigned in towns and cities in Tennessee where voters could not recall having seen a Republican candidate for statewide office before.  Speaking in Athens, Tennessee, Howard Baker said he thought civil rights, Medicare and agriculture had become political problems precisely because an overreaching federal government had “chipped away at individual freedom” by concentrating power in Washington, D. C.  Baker spoke before the League of Women Voters and the local Lions Club.  Later that day, Baker joined Dan Kuykendall and Congressman Bill Brock to celebrate the opening of the Bradley County Republican Party headquarters in Cleveland, Tennessee.  Kuykendall, although a conservative, had been working hard to win votes from a surprising source for a Republican – – – members of organized labor.  “The working man in Tennessee is realizing more and more that Sen. Albert Gore’s attacks on industry are keeping jobs out of our state,” Kuykendall thundered.

“Gore has had the mistaken idea that all he had to do to be popular with labor is to attack management,” Kuykendall explained.  “He is finding, however, that all of industry is one big family and even when they have a family fuss, no member of the family wants to see the whole family destroyed.”

Howard Baker did some explaining of his own.  Baker said he believed in having a strong federal government, a position not unlike many Republicans who realized the importance of the Tennessee Valley Authority, as well as “the Atomic City” of Oak Ridge.  What Baker objected to was Washington usurping power that had once belonged to state and local governments.

As Baker and Kuykendall campaigned across Tennessee during the first week of October in 1964, an announcement came that 1960 presidential nominee, Richard Nixon, would be joined by Congressman William Miller, the vice presidential running mate of Senator Barry Goldwater, in a five day sweep of the Volunteer State.  Nixon had carried Tennessee by 75,000, a much greater margin than the highly popular Dwight D. Eisenhower had managed in 1952 and 1956.  That same announcement revealed South Carolina senator Strom Thurmond would also campaign in Tennessee.  Thurmond, who had been elected to the United States Senate in 1954 as a write-in candidate and had defeated the regular Democratic nominee.  Thurmond had caucused with the Democrats, but had declared his support for Barry Goldwater’s presidential campaign and switched political parties.  Strom Thurmond would remain in the U. S. Senate until his retirement in 2003 at age 100.

Television was a relatively new medium for candidates for political office and Howard Baker especially thrived in that more intimate format.  An ad appeared in the October 3, 1964 edition of the Nashville Tennessean, paid for by Frank Fletcher, announcing Howard Baker would be on Channel 5 at 5:25 p.m. that day.  The day before, Baker was campaigning in Kingsport in upper East Tennessee at a local Kiwanis Club where he claimed “a majority of the people in Tennessee in both political parties are opposed to the direction of state socialism this country finds itself in today.”

Baker thought an encroaching federal government was a very real danger to Tennesseans.  “The danger is so great,” Baker warned, “that it threatens to permanently alter our system of government without the people understanding the significance of what’s happening to them.”  Baker went on to lambast Ross Bass’ voting record, insisting the congressman should “explain the depth and scope of his basic understanding of government.”  Baker growled “if Bass fails the people of Tennessee and refuses to explain his associations and political leanings, I promise you…I will do it for him.”

Clearly the national Republican Party believed both Howard Baker and Dan Kuykendall had a good chance to be elected to the United States Senate, as evidenced by the resources the GOP poured into Tennessee, as well as the speakers from out-of-state being sent into Tennessee.  Howard Baker left Kingsport for a rally in Sevierville with Senator Thruston Morton of Kentucky.

Campaigning in Tullahoma, once a bastion of the Democratic Party, Howard Baker charged he was taking the lead in the race for the U. S. Senate because “the people of this state fear the significance of the Americans for Democratic Action (ADA) philosophy of Ross Bass.”  Baker noted Bass was ranked by the ADA along with liberal Minnesota senator Hubert Humphrey and Congressman Adam Clayton Powell, a black New Yorker.  “The ADA is the outfit which wants to immediately give recognition to Red China and bring her into the UN,” Baker reminded his audience.  “They are against prayers in public schools.  They want to abolish the House UnAmerican Activities Committee.  They are opposed to loyalty oaths.  They want the minimum wage increased to $2 an hour.”  Baker said it was hardly “any wonder” Tennesseans were “alarmed” by the candidacy of Congressman Ross Bass whose “voting record in the US House” was “consistently in favor of this left-wing radical group…”  Baker said Ross Bass would be the most surprised man on earth come Election Day.

Another change in Tennessee politics was the role of the wives of candidates.  Nancy Kefauver, the Scottish-born red-headed wife of Estes Kefauver, had campaigned along-side her husband, especially in his presidential campaigns in 1952 and 1956.  Pauline Gore was perhaps her husband Albert’s most trusted advisor.  The wives of Dan Kuykendall and Howard Baker were highly active in supporting their husbands in their respective senatorial campaigns.  Joy Baker was especially vivacious and a seasoned campaigner as she was the daughter and only child of the most recognizable of congressional Republicans: Senator Everett Dirksen of Illinois.  Dirksen, a renowned orator with a voice like golden honey, would enjoy a best-selling record album extolling American heroes.  The Minority Leader of the United States Senate, it seemed only natural he would come to Tennessee to campaign for his son-in-law.

John Sherman Cooper, the senior U. S. senator from Kentucky, campaigned for the GOP candidates at a barbecue at Oneida High School.  Cooper, an avid supporter of the Tennessee Valley Authority, gave the late Congressman Howard Baker credit for the “self-financing” legislation in 1959, which had greatly benefitted TVA.  “The Democrats can’t take credit for that bill,” Cooper crowed, “for it was Republican legislation all the way.”  Cooper urged his audience to support the Goldwater – Miller ticket, as well as Howard Baker and Dan Kuykendall for the United States Senate, and John J. Duncan for Congress.  Duncan, the mayor of Knoxville, had barely won a contentious GOP primary with Judge Frank Qualls of Roane County and was the Republican nominee for Congress from Tennessee’s Second Congressional District to succeed Howard Baker, Jr.’s step-mother Irene, who had won a special election to succeed her late husband in the House of Representatives.

Howard Baker went on the attack once again while campaigning in Memphis.  Baker chose to poke at a tender spot that Governor Frank Clement had probed during the fierce campaign for the Democratic nomination for the Senate.  Baker said Congressman Ross Bass had answered only 10 of 85 rollcall votes in the House of Representatives in 1964.  Three of the ten rollcall votes answered by Bass were motions to adjourn.  Baker was speaking in the stead of his father-in-law Everett Dirksen at a $25-a-plate fundraising luncheon.  Baker joked the three votes Congressman Bass had cast to adjourn the House “were probably the best Ross Bass has done for Tennesseans.”  Dirksen had been delayed in visiting Tennessee due to being detained in Washington, D.C., ironically, to meet with President Johnson and other congressional leaders before departing for Nashville.

Baker pounded Bass for hurrying back to the Capitol to vote for Johnson’s Civil Rights bill, a measure that did not receive the support of either Senator Albert Gore or Senator Herbert Walters.  Howard Baker said Bass voted for the House version of the bill “which would have denied you and I the right of a jury trial by our neighbors in some civil rights cases.”  Baker also criticized Bass for returning to Washington to vote himself a pay raise, as well as increasing the salary of his wife, who had been employed on his staff since he had first been elected to Congress in 1954.  “I have no quarrel with Mrs. Bass,” Baker said, “she is a fine lady, and I am sure she came closer to earning the nearly $100,000 she has received from the taxpayers than did her husband, Ross.”

“But I want to assure you of one thing,” Baker told his audience, “when you hire me to represent you in the US Senate, you hire my family without pay.”

On October 21, 1964, Howard Baker and Dan Kuykendall were in Knoxville to appear on a question and answer program sponsored by WBIR-TV; Senator Albert Gore and Congressman Ross Bass both opted not to appear.

Baker’s father-in-law, Senator Everett Dirksen, finally able to leave behind his responsibilities in Washington, came to Tennessee to campaign.  Third District Congressman William E. Brock joined Dan Kuykendall in traveling to Morristown where Senator Dirksen was campaigning for the GOP ticket.  “Never before,” Dirksen said in his dulcet tones, “have I been so proud to be a Republican as in 1964” due to the high quality of Republican candidates “from the Atlantic to the Pacific.”  The rally drew some 2500 people who filled the local high school auditorium.  Dirksen had already regaled an audience of 700 folks at a fundraising luncheon at Chattanooga’s Read House Hotel.  The hotel manager speculated the crowd was the largest ever held in the Read House.  The previous evening, Senator Dirksen had spoken to an audience of 800 in Nashville, the citadel of the Democratic Party in Tennessee.

While campaigning in Morristown, Dirksen praised GOP presidential nominee Barry Goldwater.  “Barry Goldwater has the courage to stand in his place whatever it may cost,” the Illinois senator said to “the delight of supporters” at the event.

An energized Howard Baker promised the gathered Republicans, “Barry Goldwater is going to carry Tennessee, Dan Kuykendall is going to be elected to the US Senate, Bill Brock is going to be reelected and I am going to beat Ross Bass.”

In turn, Everett Dirksen praised his son-in-law, Dan Kuykendall, Congressman Bill Brock, and Barry Goldwater.  After praising all the Tennessee Republicans, Dirksen tore apart the Johnson administration in particular and the Democrats in general.  Senator Dirksen scoffed at the “Peace and Prosperity” campaign theme used by President Johnson and the Democratic Party. “Peace?” Dirksen bellowed. “Where?  In the Congo?  In Laos?  In Vietnam?  In Cambodia?”  Nor was Dirksen impressed by the notion America was prosperous under Lyndon Johnson.  “Prosperity?” Dirksen queried.  “With the highest cost-of-living in history and the biggest national debt?”  As to the “Let Us Continue” theme of Johnson’s reelection campaign, Everett Dirksen thundered, “Continue where?  On the uncertain road we have been traveling of fiscal irresponsibility?”