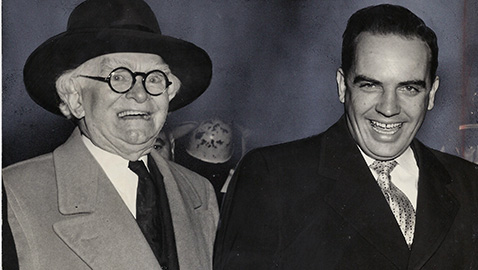 1964 was a presidential election year and Lyndon Johnson was running hard to win a term in his own right against Arizona senator Barry Goldwater.  Tennessee was slowly, but surely, becoming a two-party state.  The Republican nominee for president had carried the Volunteer State in 1920, 1928, 1952, 1956 and 1960.  Democrat John W. Davis managed to carry Tennessee, but little else against incumbent president Calvin Coolidge in 1924.  Herbert Hoover won Tennessee in 1928 against New York governor Alfred E. Smith, quite likely largely due to prejudice against Smith’s Roman Catholicism.  Even heavily Democratic Davidson County (Nashville) opted for Hoover over Smith.  E. H. Crump, leader of the Shelby County political machine had his hands full in carrying Memphis for Smith.  Smith lost decisively even with U. S. senator Kenneth D. McKellar campaigning hard for the New Yorker.  McKellar was easily reelected to the Senate over credible GOP opposition and Henry Horton won the governorship by a similarly large majority over a lackluster Republican nominee.

The Great Depression and the advent of Franklin D. Roosevelt and his New Deal did much to consign Republicanism, if not to Hades, then safely to the First and Second Congressional districts.  Roosevelt was immensely popular in Tennessee and carried the state the four times he ran – – – 1932, 1936, 1940 and 1944.  McKellar, the first U. S. senator to be popularly elected by Tennesseans, was the architect of constituent service in the state and served longer than any other from the Volunteer State: thirty-six years.  McKellar and his personal friend and political partner, E. H. Crump, dominated the politics of Tennessee for almost two decades, 1932-1948.  Crump destroyed the domination over state politics when he consented to Governor Jim Nance McCord instituting a sales tax for education and refusing to back Tennessee’s junior United States senator Tom Stewart for reelection in 1948.  Crump gave his backing to an obscure Circuit Court judge, John A. Mitchell, from Cookeville for the senatorial nomination.  The Memphis Boss had been astonished by Senator Stewart’s refusal to withdraw and subsequent announcement he would run with or without the Boss’s endorsement.  Crump’s support for Judge Mitchell gave Chattanooga congressman Estes Kefauver precisely the opening he needed to win the Democratic nomination.  Split three ways, Kefauver won a plurality of the vote.  Judge Mitchell ran a dismal third and it was readily apparent had Crump stayed with Stewart, the senator would have certainly been renominated.

Governor McCord, rather than being the beneficiary of gratitude from educators, who had been the recipients of much of the largesse of the implementation of the sales tax, saw many teachers back his opponent, Gordon Browning.  Browning had been one of the most overwhelmingly defeated governors ever to seek reelection in the state in 1938.  Browning’s career was revived by excellent timing, good luck and the sales tax.  Irrespective of how noble the purpose, Tennesseans almost invariably punished any incumbent to increase taxes and Jim Nance McCord was no exception.

Browning, a veteran of Tennessee politics, was swept out of office in 1952 by thirty-two year political wunderkind Frank Clement.  That same year saw an aging and ill Senator K. D. McKellar lose to forty-four year old Albert Gore.  The decade of the fifties belonged to Estes Kefauver, Albert Gore and Frank Clement.  Kefauver died in office in 1963.  After a four year absence from the governor’s mansion, Frank Clement made a comeback, winning the governorship once again in 1962.

Both Albert Gore and Frank Clement were on the ballot in 1964.  Albert Gore was seeking a third consecutive term in the U. S. Senate while Clement ran for the Democratic nomination to serve out the remaining two years of the late Estes Kefauver’s term.  Never before defeated, Frank Clement was stunned by his loss to Congressman Ross Bass of Pulaski, Tennessee.  Bass had been in Congress for ten years when he sought to succeed Senator Kefauver.  Although he represented a largely rural district in the House of Representatives, Ross Bass was thought to be more liberal.  Only Bass and Congressman Richard Fulton of Nashville had voted for President Johnson’s Civil Rights Act of 1964.  Bass managed to rally much of the coalition that had supported Estes Kefauver, organized labor, and African-Americans to deal Frank Clement the first defeat of his political career.  Nor was the race close, with Bass winning more than 50% of the vote, while Governor Clement did not even win 35% of the primary voters.

Neither Ross Bass nor Howard Baker had ever sought statewide office before, although Bass was a veteran campaigner.  Baker could not hardly be considered a political novice, growing up as the son of Congressman Howard Baker, Sr.  The younger Baker had been his father’s campaign manager during the latter’s successful 1950 race.  Bass had an advantage inasmuch as Tennessee was still considered to be a Democratic state, but Howard Baker had some advantages of his own.  Baker presented very well on the relatively new medium of television which could reach tens of thousands of voters instantly.  While television did not entirely replace the meet-and-greet events of a statewide campaign or campaigning at rubber chicken dinners, it familiarized thousands and thousands of voters immediately inside or one minute or thirty seconds.

Tennessee politics was evolving.  There were certainly rural and conservative Democrats in Tennessee’s Democratic Party, but many were deserting to either become Republicans or vote for GOP candidates.  The loss of Tennessee’s Third Congressional District was a prime example.  James B. Frazier, Jr., son and namesake of a Tennessee governor and U. S. senator, had served in Congress fourteen years when he was defeated for renomination in 1962.  A stately and courtly man, Frazier was perceived as a much more conservative Democrat than the young and handsome Wilkes Thrasher, Jr., who won the Democratic nomination.  Thrasher was seen as the kind of Democrat in step with the youthful Kennedy administration and the politics of senators Estes Kefauver and Albert Gore.  Yet Thrasher lost to Republican Bill Brock, who won over many of Jim Frazier’s more conservative supporters.  That same year, veteran congressman Clifford Davis, the last vestige of the old Crump machine in Shelby County, very nearly lost to Republican Bob James.  Some Democrats worried the bitter battle for the Democratic senatorial nomination between Ross Bass and Governor Frank Clement could give Howard Baker a boost in the 1964 general election.  Ever the loyal Democrat, Clement had announced he would support Bass in November.  “If I can do it, you can do it,” Clement told supporters.  For decades, Tennessee Democrats had been fighting one another and they seemed not to realize divisions inside their own party might make it more difficult to heal wounds in a two-party state.  Ellis Binkley, the political reporter for the Kingsport Times, wrote a story about the deep divisions inside Tennessee’s Democratic Party caused by the brutal primary between Frank Clement and Ross Bass.  According to Binkley, days before the primary election, a dejected Ross Bass believed he would lose to Governor Clement and was planning to run in the general election as an Independent.  Clement was stunned by his defeat and the magnitude of his loss, while, at least in Ellis Binkley’s opinion, Ross Bass had been equally surprised by his victory and the size of his win.  Binkley’s column not only purported to reveal the widening fracture inside Tennessee’s Democratic Party, but Binkley also contended the recent senatorial primary had been argued not on national issues, but state issues, making the campaign more about the coming 1966 gubernatorial election.  Binkley wrote about the rumors Ross Bass evidently thought he had a mandate to choose the next governor of Tennessee and the congressman’s candidate would be thirty-four year-old Nashville attorney John Jay Hooker.  Politics is always swirling with the little, petty, mindless spats and the people who enjoy promoting them, as well as those who enjoy being offended by them.  In no other place do rumors take flight and soar like a hawk than politics.  In politics, all too frequently delusion and the wildest of rumors, if not related, hold hands.  A similar example was Hooker having seemingly grabbed the spotlight from Senator Albert Gore with the opening of the Democratic headquarters in Nashville.  Some Democrats, Ellis Binkley reported, were miffed Ross Bass had brought Franklin D. Roosevelt, Jr. to campaign in East Tennessee on the same day vice presidential nominee Hubert Humphrey was campaigning in Memphis.  Humphrey certainly did nothing to smooth over hurt feelings when he urged support for the entire Democratic ticket, including his good friend “Ross Bennett.”  Naturally, the news media noticed the gaff by Humphrey.  Binkley speculated the unity of Tennessee Democrats would hold through the November election; after that, it would surely disintegrate.

With the passage of time, it is difficult to tell if Ellis Binkley had some sort of agenda, or if he was merely stirring the pot to the discomfiture of Tennessee Democrats, or simply taking a topic and squeezing a column out of it.  Yet Ellis Binkley most surely did relate one thought that likely ran through the minds of most Tennessee Democrats: it was quite nearly unthinkable a Republican could be elected to the United States Senate from the Volunteer State.

The Knoxville Journal, edited by avowed Republican Guy Smith, gleefully fanned the flames of fear of supporters of Frank Clement and former governor Buford Ellington.  Bass was only mildly less liberal than Clement, but Ellington was far more conservative than either Clement or Ross Bass.  It was an open secret in Tennessee that Buford Ellington wanted to return to the governor’s mansion in 1966.  Smith penned an editorial in the middle of the 1964 senatorial campaign chortling that if Albert Gore and Ross Bass were sent to Washington, “the Clement -Ellington organization will be as extinct as the dodo bird.”  Smith opined if those “two leftwingers” were in the Senate, John Jay Hooker, “the political man Friday of Bobby Kennedy” would almost surely be the next governor of Tennessee.  “Would you, as a Tennessee Democrat, want to help Bobby Kennedy?” Smith wondered.

One source of strong support for Ross Bass remained constant throughout the congressman’s campaign for the Democratic nomination for the U. S. Senate, as well as the general election.  The Nashville Tennessean had strongly backed Estes Kefauver from the time the East Tennessean had first announced his candidacy for the Senate in 1948.  Owner and publisher Silliman Evans had been one of Kefauver’s original supporters and likewise supported Albert Gore when he challenged incumbent Senator Kenneth McKellar in 1952.  Evans died in Fort Worth, Texas of a heart attack and his son Amon Evans ran the newspaper after his father’s death.  The hostility of the Tennessean to Frank Clement was as hot as the surface of the sun and just even more unrelenting.  At least the sun disappeared at night.

The thought Frank Clement sought to sit in the United States Senate in the place of Estes Kefauver seemed to positively mortify Amon Evans and the leadership of the Tennessean.  Ugly cartoons depicting Governor Clement in a suit decorated with dollar signs appeared regularly on the Tennessean’s editorial page.  One editorial cartoon showed the dome of the U. S. Capitol and an arm reaching out, grasping for it wearing a suit sleeve decorated with dollar signs.

The Tennessean resolutely supported Congressman Ross Bass in his race to succeed Estes Kefauver.  Bass enjoyed almost daily favorable exposure in the pages of the Tennessean, while Frank Clement received daily exposure as well, although not at all favorable.  The Tennessean was equally dedicated to helping Ross Bass beat Howard Baker in the general election for the United States Senate.