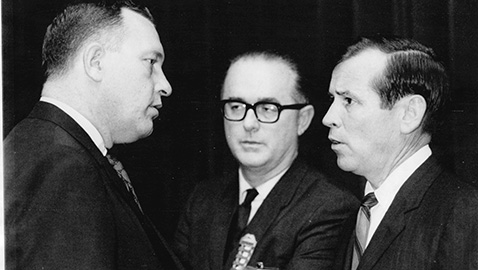 With just weeks before Tennesseans went to the polls, candidates hustled for votes in October of 1964.  Tennessee, once solidly Democratic, had become a battleground state.  Tennessee had supported Franklin D. Roosevelt in all four of his presidential campaigns, as well as Harry Truman in 1948 over the fierce opposition of E. H. Crump, who backed Strom Thurmond that year.  Dwight D. Eisenhower carried the Volunteer State in 1952 and 1956; Richard Nixon won Tennessee by an even greater margin than had the General in 1960 against John F. Kennedy.  At the beginning of the 1964 campaign, one poll had shown Arizona senator Barry Goldwater, the GOP presidential nominee, ahead of incumbent Lyndon Johnson by more than twenty percentage points.

Tennessee politics was changing.  The last vestige of the old Crump machine in Shelby County was gone with the defeat of Congressman Clifford Davis inside the Democratic primary by Navy veteran George Grider.  Davis had quite nearly been beaten by a young Republican, Bob James, in 1962.  The James campaign had been managed by Dan Kuykendall, a young Memphis businessman, who was the Republican nominee for the United States Senate seat occupied by Albert Gore.  Gore was seeking a third consecutive term while Tennessee’s other seat in the United States Senate was held by Herbert S. Walters.  “Hub” Walters, held the seat vacated by the death of Estes Kefauver.  Governor Frank Clement, who had appointed Walters, had sought the senatorial nomination in the Democratic primary as had Congressman Ross Bass of Pulaski, Tennessee.  Bass was perceived as the more liberal of the two Democrats, although if that were true, it was only by a matter of slight degree.  Congressman Bass managed to cobble together a coalition of African-American voters, organized labor and much of the remnants of the old Kefauver organization, as well as the all-out support of the Nashville Tennessean.  Silliman Evans, the publisher and owner of the Tennessean, had been an avid supporter of Estes Kefauver and one of Kefauver’s original supporters when the Chattanooga congressman had run against Senator Tom Stewart in 1948.  His son Amon was equally supportive of the candidacy of Ross Bass, especially against Frank Clement.  The Tennessean leadership loathed Governor Frank Clement.

Republicans saw the election of Bill Brock to the U. S. House of Representatives from Tennessee’s Third Congressional District as yet another sign the Volunteer State was becoming a genuine two-party state.  Democrats huffed Brock’s election was a mere aberration that would quickly be corrected in the 1964 election.

The GOP nominee for the two remaining years of the Senate seat once held by Estes Kefauver was Howard Baker, Jr.  Son of the congressman of the same name, the younger Baker had spurned the opportunity to seek his father’s seat in the House of Representatives, preferring instead to urge his step-mother to run in the 1964 special election to ensure party unity.  Baker readily admitted he did not want to go to Congress by winning on his father’s name.  Howard Baker, Jr.’s wife, Joy, was the daughter and only child of the Minority Leader in the United States Senate, Everett Dirksen of Illinois.  The golden-throated Dirksen gladly campaigned across Tennessee for his son-in-law and the GOP ticket.

Senator Albert Gore, the “Old Gray Fox” of Tennessee politics, campaigned as a populist.  Gore was something of a giant-killer in his home state, having defeated the first man ever to be popularly elected to the U. S. Senate from Tennessee, Kenneth D. McKellar.  McKellar was also Tennessee’s longest serving U. S. senator, a record he still holds today.  Gore unseated McKellar, who was deeply entrenched, in 1952.  To win reelection in 1958, Gore beat Prentice Cooper, the first man in one hundred years to win three two-year terms as governor of Tennessee.  Cooper had a lavishly financed campaign and ran as a segregationist, but was soundly defeated by Gore, who even won the former governor’s home county.

Gore made no pretense of being something he was not; the Old Gray Fox was a Democrat and a populist who campaigned forthrightly on his own record.  Gore also had strong political instincts and had voted against Lyndon Johnson’s Civil Rights Act of 1964.  Ross Bass was one of two Tennessee congressman (the other was Richard Fulton of Nashville) to vote for the Civil Rights Act, yet Bass hoped to get to the United States Senate by remaining as uncontroversial as possible.  Howard Baker complained regularly on the campaign trail the congressman refused to discuss the issues.

As the general election loomed, Bass, perhaps realizing Baker might very well win, hit a tender spot for the Republican candidates: support for the Tennessee Valley Authority.  Like Senator Gore, Bass also pointed to his experience in Congress, something neither Howard Baker nor Dan Kuykendall possessed.  TVA was a sore spot for Republicans because presidential nominee Barry Goldwater proposed selling the agency.  Baker’s father had been a strong supporter of TVA during his time in Congress, but Baker was on the defensive on the issue.  Few Tennesseans could imagine Tennessee without TVA or wanted to.  Bass warned audiences in Republican East Tennessee an unfriendly president could seriously damage, if not destroy the Tennessee Valley Authority, even without selling the agency.  Bass said it would be nearly impossible to get an appropriation for TVA out of Congress if the White House did not include it in the budget.

Gore, who had carefully navigated around Senator McKellar’s seniority in the Senate, now boasted of his own while campaigning in Maryville.  The senator said his committee assignments were valuable to Tennesseans.

During the last two weeks of the campaign, the Tennessean reported, “The polls show it, the experts predict, and the odds favor a Democratic “tidal wave” in congressional races across the nation, heavy gains in the House and some in the limited U. S. Senate field.”  Considering that fact, the Tennessean thought it especially important to elect the Democratic nominees in Tennessee.  The Tennessean quoted from the endorsement of Ross Bass’s candidacy in the Memphis Commercial Appeal.  The Commercial Appeal sniffed the United States Senate was hardly the place to try out a neophyte or a beginner.

Some Republicans were so enthused about the campaign, they were thrilled at the prospect of a visit by GOP president nominee Barry Goldwater to the First Congressional District, a citadel of Republicanism in Tennessee.  Congressman James H. Quillen said he and Republican National Committeewoman Louise Reece, widow of Carroll Reece, the long-time congressman from the district, had urged Senator Goldwater to campaign in the area.  Nor was Goldwater the only presidential candidate coming to Tennessee.  Lyndon Johnson’s campaign announced the president would make yet another swing through the Volunteer State.

Howard Baker continued campaigning across Tennessee hammering Congressman Ross Bass’ record.  Campaigning in Donelson, Tennessee, Baker charged, “Ross Bass not once during 1964 voted against the Americans for Democratic Action position on a single issue.”  Referring to the ADA as a “radical leftwing” group, Howard Baker said the only way Bass could have voted more consistently with the position advocated by the organization was to have been present for more roll call votes.

Congressman Ross Bass came to campaign in Knoxville during the last few weeks of the senatorial campaign.  Speaking before a group of Jaycees, Bass said he believed the federal government had a role to play in the lives of Americans and Tennesseans.  Bass cited the Tennessee Valley Authority, the Atomic Energy project in Oak Ridge and the Central Arizona Project as three examples of the federal government’s participation “in the highest traditions and best interest of the people.”  The congressman pointed to the Appalachian program as one that would never have been undertaken without the federal government, as private investment was not at all interested in such a project.  Bass said private enterprise was “just not willing or able to undertake the basic development – – – if the government goes in and develops access roads, develops new uses for the resources of the area, stimulates the productiveness of the region – – – then private investment will take over and develop an industrial region there.”  Ross Bass said he strongly believed in both the federal government and private enterprise.

Bass criticized some Republicans for opposing TVA while supporting the Central Arizona Project, which made water available in desert regions.  “These projects are the same, except that TVA is in Tennessee and six other states and the CAP project calls for the direct investment of at least $1.2 billion federal dollars,” Bass explained.

The reporter covering the meeting for the Nashville Tennessean described the audience as “sharply divided” in a “traditionally Republican territory” and questions directed to Bass “concentrated on philosophical differences between the Democratic and Republican party candidates.”

Ross Bass did not attempt to tiptoe around the Republican members of his audience and forthrightly said he supported the foreign aid program and would vote for funding for foreign aid “in those instances where it is shown our national security and interests are best served.”

500 women gathered in Morristown for the Tennessee Federation of Republican Women, which included Mrs. John J. Duncan, wife of Knoxville’s mayor and the Republican nominee for Congress from the Second Congressional District.  The women heard from Congressmen Jimmy Quillen and Bill Brock, as well as Howard Baker and Dan Kuykendall.

Ellis Binkley, the political columnist for the Kingsport News, noted an interesting difference between the senatorial candidates.  Binkley wrote Senator Albert Gore and Congressman Ross Bass “never utter the names of their opponents, Republicans Howard Baker, Jr. and Dan Kuykendall.”  Conversely, Binkley noted “Baker and Kuykendall never miss an opportunity to call their opponents by name.”  Binkley quoted Howard Baker as saying, “I know it’s not good politics to use your opponent’s name in a campaign, but I want everybody to know who I am running against.”

Binkley acknowledging “in private” both Senator Gore and Congressman Bass would mention their respective opponents by name “but neither leaves the impression – – – publicly – – – that he is too worried about the outcome of the election.”

Baker had been trying hard to paint a portrait of Ross Bass as an ultras-liberal and ironically, cited the group, Americans for Democratic Action, as “the outfit that wants the U. S. to give up the Panama Canal rights.”

Howard Baker dinged the voting record of Congressman Ross Bass, while at the same time proclaimed his own devotion to the interests of Tennessee.  “The future of the TVA and AEC must have the full devotion and attention of every member of both the House and the Senate from Tennessee,” Baker thundered in Smithville.  “The record shows that Ross Bass failed to appear in Washington to vote either on the TVA or AEC appropriations on bills in the last session of Congress,” Baker charged.  The Republican acknowledged Bass had arranged to “pair” his vote, but still Baker thought Bass’ absence indicated a serious “lack of concern” on the part of the congressman.  Baker pledged to do all he could to look after both the TVA and the Atomic Energy Commission, noting “the fate of the Tennessee Valley region depends on the AEC and the TVA performing at peak efficiency.”

The Tennessean published an editorial in advance of the general election taking issue with the slogan being used by the Volunteer State GOP: “A Choice for Change.”  The editorial said Ross Bass had “a fine record of service to his constituency and his state.”  The Tennessean insisted that the Democratic leadership in the House had attested to Bass’s ability in placing him on the important Ways and Means Committee, “a key post not given to lightweights.”  The editorial pointed to the experience Ross Bass had acquired in ten years of congressional service.  Bass “knows his way through the legislative maze” and was “held in high esteem by his House colleagues.”

In a matter of a week or so, Tennesseans would decide if they held Ross Bass and Albert Gore in high esteem or opt for those candidates who represented a choice for change.