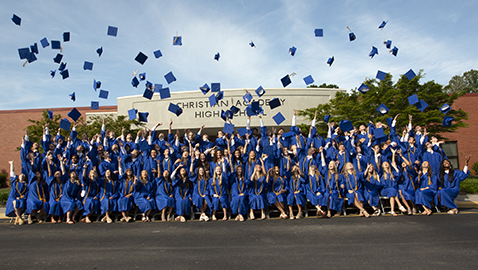 Calling the Christian Academy of Knoxville graduated class of 2019 “stellar” might be an understatement—not because the students earned more than nine million dollars in scholarships and accumulated more than 6,000 hours of community service, but for the reason that all 97 graduates will continue higher education at either a two-year college or four-year university in the fall.

Although these statistics and students’ accomplishments are complimentary to the 2019 class, it doesn’t showcase a unique element to their education as well as a graduation requirement. Setting apart the 97 graduates from those of other high schools is a program that sets them apart. It is called the Capstone Project which began in 2012. It is an opportunity for upperclassmen to practice their studies and faith by volunteering to help others. Beginning the junior year, students decide on how to best serve the community with the skills and talents they have acquired. Two years of planning and implementing a project with a minimum of 40 service hours that is designed “not so much for them to follow their passion, but to find their calling,” said Susan Stanford, CAP Capstone Class and Bible teacher, as she explained the program. The hope is for students to discern what God is calling them to do and to be transformed on their own in the process.

“It is affirming and empowering for these students to complete the project. Many times, the projects don’t look at all like what they were first decided upon. It’s about serving people, using your gifts and your talents to do something and see ‘I really made a difference,’” added Stanford. Four Capstone Project Awards are given to seniors each year who displayed a ‘bigness.’ “We want the project to be bigger than anything the student has done before,” she explained.

Baseball lover Christian Cate worked more than 150 hours on his Capstone Project. “The idea was simple enough…get some people together and teach the kids a little baseball, have some devotionals and snacks, and have fun. Little did I know how impactful this project would be…for the kids, the volunteers, the inner-city neighborhood…and for me,” he said. Cate conducted a free, one-week baseball camp for at-risk kids served by the Wesley House last summer as a rising senior. Fifteen volunteers worked beside him, including several professional coaches from other area schools, who were all dedicated to helping the players succeed in their own skill set.

In preparation, Cate petitioned the city to fix up a local neighborhood field. The day before the camp was to start, Cate knew he had made a difference when he went to the field to paint lines on the dirt and saw the neighborhood kids had discovered the field already and were using it.

“I have decided to do the camp again, and build on the work we did last year,” said Cate. This summer, he is directing another camp for 25 elementary aged inner city kids from June 17 to 21. To learn more, volunteer or donate equipment, reach out to: https://uk.gofundme.com/2019-wesley-house-baseball-camp.

Gavin Lyell broke new ground also by making an impact on teen fathers through developing a Capstone Project called “Journeys: Missions for Young Men.” He wrote the curriculum for an eight-week program for teen dads with classes teaching parenting, CPR, and child health, financial planning, and job planning. The program included mentoring, support groups, legal advice, and involved charity work, and spiritual guidance. “If you do a Google search on teen pregnancy, nine out of ten times you will discover than any programs out there are geared toward teen moms. Society seems to forget that there had to be a teen father as well,” said Lyell.

After looking into churches and organizations to implement his program with no luck, he came across the possibility for first responders to fill the gap. A masculine diaper bag filled with child-care items and Lyell’s ‘Journeys’ curriculum provide the much needed information for teen fathers. They are handed out by first responders, some of whom, Lyell learned, were teen dads themselves.

Lyell chose to create this program because one out of three children live without their biological fathers according to the U.S. Census Bureau. Statistics show that children of absent and especially teen fathers are more likely to become at risk individuals and later continue the cycle of teen fatherhood with their children. Through his mom’s stories as a juvenile prison principal, and meeting one of the men fifteen years after leaving the prison, he was inspired to make a difference in the lives of teen fathers. To donate, volunteer, or learn more email Journeys4YoungMen@yahoo.com or call 865-654-4368.

Molly Grubb’s Capstone embodied the CAK standard of servanthood too. After experiencing several CAK mission trips herself, she wanted the same for her fellow students. Grubb decided to raise $5K for students to attend mission trips but her campaign resulted in raising $15K!

In a school of 350 students, community service starts young at CAK with older students modeling their passion to help others to the younger students.

During the 2018-19 school year, sixth graders took on “H2O for Life,” a fundraiser in which students walked the school track carrying jugs of water like the children living in Guatemala or Kenya. The money raised went to the Nasaruni Academy in Kenya. These are two countries the students conduct fundraisers for and visit on mission trips to serve others.

CAK Development Director Craig Collier describes his experience with the school as having “other people infusing Jesus into my kids.” As a father of four children who have either graduated or are attending CAK, he adds, “For our family, it has been community with like-minded families and friendships that go beyond these walls.”

CAK is a multi-denominational covenant school that represents 140 churches. “We encourage students to find their similarities, not their differences,” says Julya Johnson, CAK director of communications, when explaining what is unique about the school.

The moto for students is to be CAK warriors as servants, scholars and disciples. This is possible in activities such as Broadway productions in musical theatre, mountain biking club, student senate, missions, and scholars bowl. CAK fosters excellence in its more than eighteen clubs, fifteen sports, 11 AP courses, and four dual enrollment classes through Bryan College.

For more information about Christian Academy of Knoxville, visit www.cakwarriors.com, or call 865-813-4CAK.