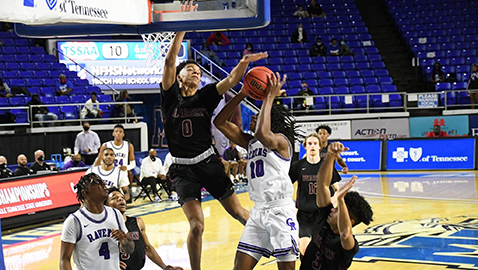 Jeremy Parrott will remember his 2020-21 basketball team with fond memories.

Some of his juniors and seniors were young players on Parrott’s 2018-19 team that gave Bearden its first-ever boys’ state championship, beating Memphis East in the Class AAA title game and ending its stranglehold on the gold basketball.

“I will remember they did a really nice job coming in and following up an ultra-successful team by putting their own brand of basketball on it; a blue-collar group that shared it, worked hard together, survived this crazy pandemic protocol season and made it all the way back to Murfreesboro,” said Parrott, the day after this season’s Bulldogs lost 50-47 to Cane Ridge in the state quarterfinals.

“I’m going to remember them as special for all those reasons.”

Parrott had just gotten back home from the state tourney when he made those comments. The game and outcome from the day before were still fresh in his mind.

“The night of or the day after the sting of a loss deep in the post-season is tough,” he said. “But I’ve been in it long enough to know that positive reflections will come from it for the young men, for their families, for the coaches.

“This is one of those teams that – I won’t say they overachieved – but I think they reached their potential and they should feel gratified with that. I still think they could have won at least (this game), but it just wasn’t to be.”

This year’s Bearden team (30-4) did make its mark, especially on the defensive side of the ball, and set a school record that may never be broken. Opposing teams averaged only 44 points per game against the “Dawgs” in 33 contests (one win was by forfeit).

“This team just knew that had to be the mantle they carried,” said Coach Parrott.

They did it with man-to-man defense.

Did the team play zone any?

This season ended No. 5 for Parrott at Bearden, who coached at Cherokee High in Rogersville for 15 years before coming to West Knoxville.

Two area teams – Kingston and Oak Ridge – made it to the semifinals before being eliminated.