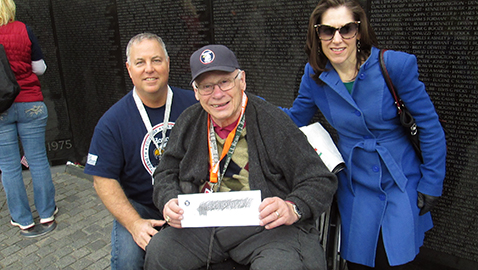 Twenty-six flights and more than 3,300 military veterans: the numbers backing the history of Knoxville’s Honor Air are impressive but the real story is the precise organization it takes to run events behind the scenes.

Prestige Cleaners owner Eddie Mannis, founder of the effort to recognize area veterans, is the cog behind HonorAir’s success.

I was honored to accompany the veterans on the trip as the media representative and a veteran myself last Wednesday and was impressed with the absolute organization and seamless coordination shown by Mannis and his employees, the volunteers, the American Airlines crew,  and the National Park Police who escorted the many buses from one monument to another.

Of the 132 veterans on last week’s trip, eight were veterans of World War II, 23 were Korean War veterans and 101 were Vietnam veterans. The oldest veteran taking the day trip to Washington, D. C. was 98 years old and the youngest was 65. The trip included three female veterans and a Vietnam helicopter crewman who had been shot down ten times.

The day began with a welcome at the Knoxville airport and greetings from Knoxville Mayor Madeline Rogero and Knox County Mayor Tim Burchett. Both spoke briefly and then shook the hand of every veteran and their escorts as they boarded the plan to the music of a patriotic band.

I was delighted to sit next to Mannis and Dawn Ford, who coordinates the flight logistics, on the way up and back. The plane was packed with volunteers, escorts, and veterans. Many of the veterans have never been to the Washington monuments and everyone was anticipating the trip and the experience.

The all-volunteer team includes several veterans.   Jim Cundall is the flight coordinator and spends many hours working on the list of veterans to be honored.  He is assisted by Jan Rector who is a full time employee of Prestige Cleaners.  Flight commander is Retired Col. Joe Sutter.  Charlie Harr is also a Vietnam War veteran and serves HonorAir as a team leader.  Others that serve on the team are Kay Kirkland, Taylor Wortham, Nathan Wienbaum,  HonorAir also travels with a full medical team that is prepared for any emergency that may arise.

The flight was just over an hour and, during the trip, the veterans were served sandwiches and snacks. At one point each veteran and their escort were given a small paper bag of snacks prepared by the students at Corryton Elementary School. Each bag had a message from the students to the veterans.

Arrival in the Reagan National Airport in Washington meant another band, well-wishers and awaiting buses. The lead bus was escorted by National Park Police vehicles with emergency lights on and, for the most part, traffic between stops honored the vehicles and pulled off to let the buses by. Mannis said that without the police escort the visits would not be on time.

He also said that without the volunteer escorts, each of which pays their own way, the trips would not be possible.   These helpers play a huge role in helping to provide safety and assistance for every veteran.  At each stop the buses unloaded the escorts first so they could help with wheelchair-bound veterans and collect their other veterans for the visits.

The one-day outing began at the new U.S. Air Force Monument that sits atop a hill overlooking the Pentagon. The local tour guide pointed out sites along the way with a bit of history and stories about each monument, even those we passed but didn’t visit.

Upon arriving at the Lincoln Memorial the veterans and their escorts visited the Vietnam and Korean War Monuments. Downtown D.C. was crowded with other veteran groups from around the nation, and students and tourists, many coming to see the blooming cherry blossom trees. Some of the veterans  visiting the Vietnam Wall took time to trace the name of a relative or friend who lost their life in that conflict.

Mannis said that on one trip a Vietnam veteran refused to go to the wall and only did so after his escort encouraged him to do so. The visit to the wall has helped heal many veterans of memories of that conflict and their unwelcome return home. One Vietnam veteran on the trip said visiting the wall erased a lot of the troubles he had been carrying.  Just two examples of many, many stories that are shared during this day.

The HonorAir buses then went to the World War II Memorial, a striking memorial with a stone for each state and a large fountain in the middle.

The buses loaded again and drove across the Potomac River to Arlington Cemetery by way of a loop downtown past the Capitol and Navy Memorial. At Arlington the East Tennessee Veterans stood in silence and watched the changing of the guard at the Tomb of the Unknown Soldier.

The buses wound their way back to the airport and, again, another send off. Yet nothing was like the huge reception we found waiting for us in Knoxville. Over one thousand people greeted us with signs, balloons, and it seemed everyone wanted to shake hands and say “Welcome Home.” For the Vietnam veterans, that phrase means a lot.

Planning and executing HonorAir flights is expensive, about $80,000 for each trip. The organization has sponsors, including Covenant Health, and takes donations. Recently Mannis asked his Facebook friends to contribute to HonorAir for his birthday.

“Over the years the program has become a community event. Multiple civic organizations and individuals have made it possible to continue honoring the contributions veterans have made to ensure our freedom,” Mannis said.

The program costs about $200,000 annually and HonorAir partners with the Smoky Mountain Air Show and numerous groups, military organizations, hospitals, city and county employees, businesses and private individuals to make the trips possible.

HonorAir is a non-profit organization that accepts tax deductible donations. Prestige Cleaners provides all the administrative cost so every dollar donated is applied directly to the cost of the flight. The next flight is October 3 and any World War II, Korean War or Vietnam War veteran interested in going on this or any future HonorAir Knoxville flight can apply at www.honorairknoxville.com.