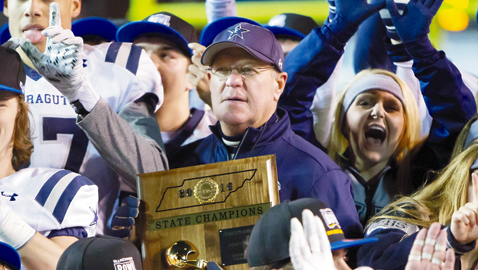 It certainly wasn’t easy, as Farragut turned what some felt was a rebuilding season into a first-ever championship campaign.

For his efforts, Eddie Courtney, who guided the Admirals’ ship to their treasure, has been honored by his peers as The Knoxville Focus – Coaches’ 2016 Knox County Coach of the Year.

Courtney, in his 21st season as Farragut head coach and 40th overall on the Admirals’ staff, received 14 votes for the award. Bryson Rosser, who in only his third season at Central, led the Bobcats to their first state title appearance in 17 years, garnered the remaining three votes.

Head coaches at the 19 Knox County high schools which play football, including Division I and II and all classifications, were requested by the Focus to vote for a Knox County Coach of the Year and Player of the Year, excluding themselves and their own players as candidates.

In addition, the local coaches were asked to submit players from their respective teams for an All-Knox County “first team” and “honorable mention.” Seventeen coaches responded, while one did not have any honorees and one did not reply.

“Coach Courtney and his staff did a tremendous job this year,” said veteran South-Doyle head coach Clark Duncan. “People don’t realize how hard it is to get to the state championship game and then win it.”

Duncan’s Cherokees played and lost twice to Farragut this past season, including a 45-14 defeat in the semifinals.

As Farragut’s head coach since 1996, Courtney, whose overall won-loss record now stands at 152-90, has had good teams but never one to advance beyond the quarterfinal round.

This season did not look that promising either as far as state honors go. Farragut was minus four all-staters from the 2015 squad. Only 10 starters returned and there were a low number of seniors on the roster.

The Admirals lost at Oak Ridge 30-25 in Week 3 and nipped arch-rival Bearden 28-27 in Week 4. Farragut, in fact, would not lose again in regular season play, but how far could the Admirals advance against tough playoff opposition out of Region 4?

After a 40-21 first-round win over McMinn County, Courtney made an aggressive play call late in the game that might have made the difference in a 33-30 win at Rhea County.

Farragut fell behind Ooltewah 42-14 in the quarterfinals but rallied. Quarterback Adam Fulton’s touchdown pass to Jacob Warren with 1:05 remaining in regulation tied the score at 42-all. The Owls responded by getting in field goal range, but a 27-yard attempt missed as time expired. Farragut went ahead at the beginning of the second OT and stopped Ooltewah on fourth-and-2 for the victory.

After the semifinal win over South-Doyle, Courtney, a cancer survivor since 2005, got a Gatorade bath as the Admirals celebrated their state title berth.

The challenge that lurked at the BlueCross Bowl in Cookeville was huge. Independence was defending champion, ranked No. 1 and 14-0. The Eagles flew to a 35-7 lead in the second quarter.

But the Admirals, 13-1 and winners of 11 in a row, didn’t quit. Courtney smiled in a halftime TV interview after his team scored before intermission. Farragut would go on to score 38 unanswered. Courtney couldn’t hold back the tears after the game.

After 40 years, so many were happy to see Courtney win it all, and particularly his peers.