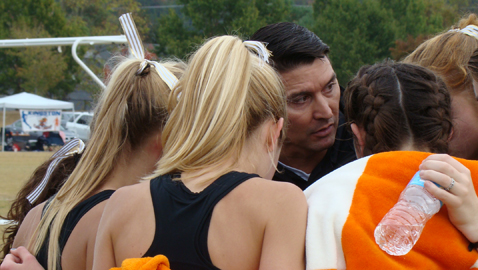 Georde Goodwyn, who made the switch from basketball to distance running last year, enjoyed his first win in cross country at the Region 2 A-AA meet Thursday at Victor Ashe Park.

The Catholic High senior didn’t just win, he dominated the field as there were no competitors in sight when he crossed the finish line with a time of 16 minutes, 20.12 seconds over the 5K (3.1 mile) course.

“I started running cross country last year and I wasn’t quite there yet,” said Goodwyn, recalling last season’s fourth place showing and 17:20 time in the region. “But this year I started to train a lot more and this was my first time winning.

“I felt pretty good (about his time). I kind of wanted to go a little bit lower, but if I was in the Class AAA race I would have won that. So I’m glad with that time. It was a good race for me honestly.”

Catholic is the defending state champion in cross country and also captured the Class A-AA state track title this past spring.

“We set two goals this season – win KIL and state,” said Goodwyn. “I think we’re on the right track for that.”

Goodwyn played varsity basketball as a sophomore and also made the team as a junior last year.

“I decided to stay with cross country because I really loved it,” he explained. “I thought that it was the right sport for me and would really get me to a higher place than I was in basketball.”

Goodwyn has aspirations to run in college and said he has had talks with UT and UT-Chattanooga.

“He’s still learning a lot and building fitness,” said Catholic Coach Sean O’Neil. “Today he put together a great race. Even though he was by himself, he really challenged himself the whole way through. He really pushed himself all the way to the finish and ran a great time.

“I was really proud of the team,” O’Neil added. “They really pushed themselves. I told them we wanted to build momentum into the state meet and I think we did that very well.”

O’Neil expects Fred J. Page High of Nashville and Central Magnet High of Murfreesboro to be the chief challengers for his Irishmen at the state this weekend in Nashville.

“Christian Academy has really come on this year and should be a top 5 in the state,” he said.

The Warriors were second in the region with 65 points. Alcoa (84) took third.

Drew Degges of CAK in fifth, Tyler Little of Scott High in sixth, Brent Borden of GCA in seventh and Emmerson Fulton of Gatlinburg-Pittman in eighth.

CAK’s Rebecca Story, as expected, won her fourth region title (18:31.13) and set her sights on the state meet. Story has five state track titles in her career but will be seeking her first in cross country.

Winning the state cross country title is important to her and she is aware of its absence on her athletic resume.

“I’m hoping to go into state really focused and relaxed and ready to roll so I can win my first state cross country championship,” said Story.

Story’s first of five state crowns came in the 3200 when she was an 8th grader.