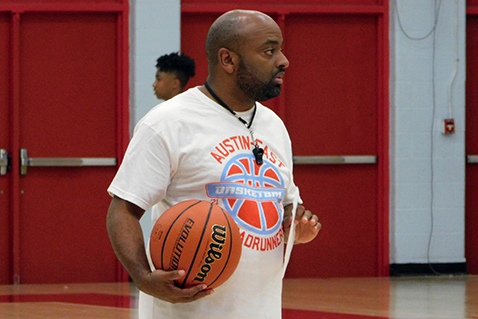 A-E’s Bertram is one of 16 new head coaches

There are a lot of new faces on the Knox County high school basketball scene this year with 16 new boys’ and girls’ head coaches.

Preseason practice started Oct. 31 and Hall of Champions Games will be played this week (Nov. 14-19) along with the KOC Tip-Off Classic tonight at Central and Tuesday night at Karns, starting at 5:30.

In that first week of preseason practice, this reporter saw new Austin-East boys coach Denard Bertram working with the Roadrunners on Nov. 3 for over an hour at Clifford Ross Gymnasium.

And as one might expect, there were mixed expressions on Coach Bertram’s face as he put his team through different drills … a smile from just being around his guys … a strong focused look as though he was ready to get in there with them … and even a frown as one player had to come off the floor after a lack of effort.

Overall, however, the Roadrunners worked hard and there were some laughs shared by the coaches and players too through the practice.

To help fans get to know a little about their new coach, The Focus sent out a brief questionnaire to obtain background information. One of the questions asked for the coaches to point out their career highlight in basketball.

As he enters his 20th season of coaching this year, a highlight of Bertram’s career has been being involved with several championship teams as an assistant coach. He was part of the 2014 Class AAA state runner-up boys’ coaching staff at Oak Ridge.

“This is my first head coaching job,” said Burris, who takes over the Admirals’ program. “I played high school basketball at Bearden before transferring to Maryville High for my senior year (2009-2010). I went on to play at Maryville College (2010 – 2014).”

As for his career highlight in basketball, Burris said: “I’d have to say going to the NCAA tournament with Maryville College my sophomore year under Head Coach Randy Lambert. We almost upset the No. 5 team (Wooster) in the country on their home floor in front of a sellout crowd, losing on a last second shot. It was one of the most electric atmospheres I’ve experienced coupled with a phenomenal down to the wire game. The NCAA tournament just can’t be replicated as an experience.”

Andy Arendt also will be making his debut as a head coach at HVA. He has been an assistant at CAK (boys) and at Farragut (girls).

“The highlight of my basketball career is coaching as an assistant in the state championship game last year with Farragut,” he said.

Arendt played high school basketball at CAK and did not play in college.

Zachary, who previously has been head coach at The King’s Academy, played football and basketball at Farragut and said his career highlight was winning the 2001 district tournament championship and being named the tournament MVP.

“I was an assistant at CAK under Shane Wells for five seasons with the highlight being back-to-back district regular season and tournament championships and a state sectional appearance.”

THE FOCUS will introduce the eight new girls head coaches to its readers in next week’s issue.