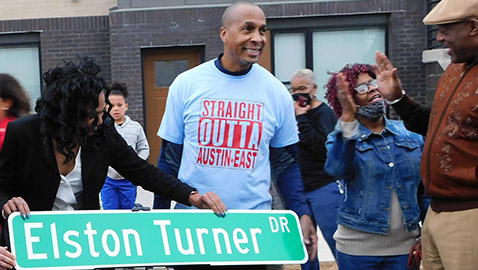 Elston Turner is in the fourth quarter of his coaching career.

The 62-year-old Knoxville native has had a remarkable run as an assistant for 24 years in the NBA but has never been a head coach. He has come close a few times to realizing that dream and there’s no question he is qualified.

Time might be running out, but he hasn’t given up on getting that position someday.

To make sure I was correct on where he stood on the topic, I posed the question to Turner when he was here in February being recognized by his hometown with a street named in his honor.

“The sun is setting on that aspect, but who knows? I’m still on the bench and assistant coach,” he answered. “It may happen, but I’m not chasing it like I once was. I’m just happy to be in it so long and if it doesn’t happen, I’m happy and as blessed as I can be.”

A head coaching position isn’t on Turner’s mind at the moment as his current job finds him in the NBA’s Western Conference playoffs with the No. 7 seed Minnesota Timberwolves going against the No. 2 seed Memphis Grizzlies.

The T’Wolves earned their first postseason berth in 18 years last week and their breakout season could spark some interest in Turner from team owners needing a new head coach.

The position won’t be open in Minnesota as Head Coach Chris Finch has already had his contract extended.

Turner’s specialty is defense and he was hired as Minnesota’s defensive coordinator. Statistically, Turner’s contributions this season helped make the Timberwolves the top scoring team in the NBA as they scored the most points off defensive turnovers as well as 3-point shots.

Another feather in Turner’s cap was Minnesota’s fourth-quarter comeback against the Los Angeles Clippers in a play-in game. The T’Wolves rallied for a 109-104 win with a 23-8 run down the stretch.

With his coaching and leadership qualities plus his character, I don’t think a team owner could find a better man.

Despite a career that has taken him away from Knoxville, Turner has never forgotten his roots and comes back every summer to run a youth basketball camp and visit family and friends.

I covered the Austin-East High team when Elston led the Roadrunners to Knoxville’s first state basketball championship in 1977. He played for TSSAA Hall of Fame coach Clifford Ross, who stressed the defensive part of the game. That no doubt made a lasting impression on Turner.

Despite his outstanding prep career and being MVP in the state tourney, Elston was not recruited by UT. He handled that by going on to star at Ole Miss and made the Vols pay for their mistake time and time again in SEC play. The 6-5 shooting guard / small forward also led the Rebels to their first-ever NCAA tournament as a senior.

Turner was selected in the second round of the 1981 NBA draft and played eight seasons with the Dallas Mavericks, Denver Nuggets and Chicago Bulls.

His first assistant coaching position in the NBA was with the Portland Trail Blazers from 1996 to 2000.

Turner made his first attempt at a head coaching position in May of 2008 and was interviewed twice for the Phoenix Suns’ post but ultimately was not hired.

The following year he was one of three finalists for the Minnesota job, which ended up going to Los Angeles Lakers assistant Kurt Rambis.

In 2010, Turner applied for head posts with the Philadelphia 76ers and Chicago Bulls, but those jobs were filled by Doug Collins and Tim Thibodeau, respectively.

After being hired in 2011 as a defensive coordinator for Phoenix, Turner was one of four candidates for the Portland head coaching position in 2012.

Turner returned to the Houston Rockets in 2019 as a lead assistant with a focus on running defense. He was hired by Minnesota last August.

It’s been 10 years since Elston has thrown his hat in the ring. It’s not likely he will do that again, but he would pick up the phone and gladly listen if a team owner called needing a head coach.

And the chances of that happening could increase if the Timberwolves advance in the playoffs.

Believe me, I’m not the only one in Knoxville who would love for Elston to get that call.