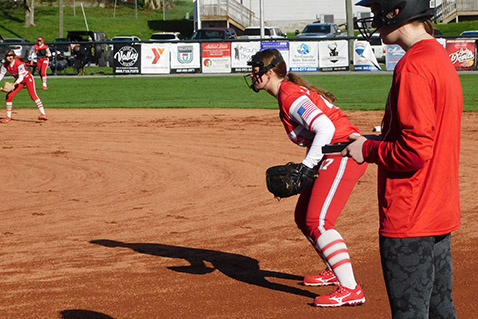 Halls High softball honored three team members on Senior Night and for one of them, it was extra special.

Alicia Reeves, who had a medical condition her freshman season followed by spinal surgery her sophomore year, took the field for the first time in her prep career.

Still not 100 percent recovered physically but having come a long way, Head Coach Bryan Gordon gave her the starting nod at first base, a position she had played a lot growing up in travel ball and in middle school.

After the Lady Devils got the first two Scott High batters out last Tuesday, Gordon asked for a timeout and motioned for Reeves to come out of the game. He met her with a smile on his face and an extended hand as she trotted back and neared the dugout.

Alicia then resumed her normal duties of recording her teammates’ play on Game Changer and cheering them on.

After Halls’ 15-0 win and during the break before the junior varsity contest – which Alicia also scored – Coach Gordon spoke in the dugout about what Reeves had meant to the team and the Halls program.

“That’s the first game she’s been in since she’s been here,” confirmed Gordon. “She’s had some health issues that won’t allow her to play and we got her doctor to clear (her) to go out there for a couple outs, so it’s great to see her get out there.

“She’s the heart and soul of our team,” continued Coach Gordon. “She’s here at practice every day. She’s the biggest cheerleader in the dugout.

“Alicia means the world to this program. To have never played an inning for us outside of tonight, she’s a top-notch kid. We’ll miss her as much as any kid we’ve ever had just for her heart and what she brings to the program.”

As Gordon continued, the reporter noticed tears swelling in the coach’s eyes as he fought to hold back tears.

“She’s a special kid. I don’t know too many kids that had the diagnosis of never getting to play, but show up every day and find something to do during practice – I mean go shack home run balls or go shack foul balls out of the creek. She means the world to this program and we’ll miss her immensely.”

That thought made it difficult for the coach to continue. The reporter apologized, but Gordon said: “That’s all right. I love her. I absolutely love her.”

The three seniors and their families were introduced prior to the start of the game and Reeves, a member of the All-East Tennessee and All-State high school choirs, sang the National Anthem from the press box.

“For me, being in the game, at least a little bit, was definitely worth it,” said Alicia. “It may not seem like a lot of time at first base, but considering the fact that I haven’t been on the field in four years, I am very appreciative of the time that I was given. And personally, I am just so happy that I could do so before my high school experience ended completely. So, yes, it was worth it!”

Aspen Calloway, Halls senior and two-year pitcher, said after the game: “I know Alicia has been through a lot. Without her, I’m not sure we would be where we are today. She’s never given up on us. She’s here every practice. She dresses out every day, knowing she isn’t going to get to play. Seeing her get to go out on the field tonight is a really bittersweet moment for us and we are so grateful to have her everyday here.”

Calloway also got a little emotional as she talked about Alicia, and this reporter admits her comments tugged at his heart, too.

Aspen will be going on to play college softball at the University of the Cumberlands as a first baseman and will go into the Nursing program.

“I’m so blessed to be able to say that I get to continue my academic and athletic career at the next level,” she said. “It’s something I’ve dreamed of since I was five years old.”

Halls’ other senior is leftfielder Jacie King, a four-year letterman who has a 3.5 grade point average.

“My word on her is that she will come through in the ‘clutch’ as a softball player,” said Calloway. “There’s been many times when we needed her to come in and hit and she has gotten the job done.”

King also plans to continue in the field of Nursing and completed all the Nursing classes offered at Halls. She will attend Pellissippi State Community College in the fall and wants to work at Children’s Hospital. She then plans to transfer to a four-year university to obtain a neonatal Nurse Practitioner degree.

Reeves was awarded the Coaches’ Lady Devil Award her junior year and was named to the 2021 All-Academic softball team. She’s a member of the National Honor Society, Math Honor Society, French Honor Society and FCA and has earned a 4.38 GPA.

Alicia plans to go to Carson-Newman University and major in Accounting.

Alicia says thanks for an ‘amazing night’

(Editor’s Note: Alicia Reeves came to Halls High School as a freshman in the fall of 2018 with hopes of having an outstanding prep career in softball. However, a medical condition her parents Tim and Michele first thought was a form of asthma eventually required spinal surgery in November of 2019.

Her condition has improved over time with physical therapy, but not until last Tuesday, April 19, had she been able to get on the field in a game.

Focus sports reporter Steve Williams asked Alicia what she enjoyed about her Senior Night experience overall and to feel free to add any comments about her coaches and teammates. Below is Alicia’s reply.)

It was an amazing night overall! I was and am so thankful for the opportunities that I was given. I couldn’t have asked for more.

As for my coaches and teammates, I think all the glory should go to them. Each and every one of my teammates work hard at practice every day to achieve the level of playing that they currently have. Each of them cheer everyone else from the dugout, encouraging them to do their best. The coaches are amazing as well. Without their guidance, effort and time put into the program, my Senior Night wouldn’t be possible. So, I thank all of my teammates and coaches for always sticking by me.

As for the specifics of the game, I think Aspen Calloway (our senior pitcher) did an awesome job in the circle! She is always so dedicated to the team itself, and anyone can see the love she puts into the game. Additionally, she is probably the most talented softball player that I know. So, our 15-0 win was aided by her pitching.

And though I didn’t get to hit in the game, I was very proud of my team for doing so well. Our other senior, Jacie King, does a great job working the count at the plate. No one else does it better. Plus, she often likes to hit it back up the middle, showing off her talent. All in all, I am very proud of my entire team for our offensive dedication and showcasing.

I would like to talk about the coaches again if possible. Coach Bryan, Coach Katie and Coach Deadra have always believed in me. Without their support and encouragement, I don’t think I would have been able to play. Because, yes, I have extensive nerve damage, but without support from your coaches, it would be hard to get back into the swing of things. So, I would like to thank them, not only for what they have done for me, but for every other player that has worn a Lady Devils softball uniform.

In conclusion, it was a great night. I had tons of support and a multitude of smiles. So, was it a good night? In my opinion, there could be no better night in the world.

Thank you so, so very much.