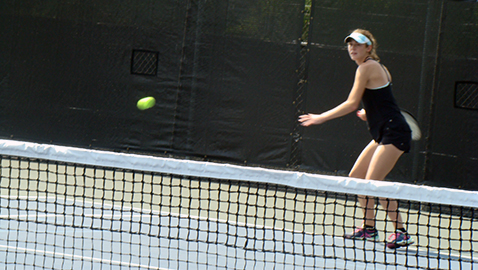 Julia Adams punched her ticket to Murfreesboro Tuesday afternoon and she’ll head to Spring Fling this week with her eyes on a state championship.

Adams, a senior tennis player for Bearden High School, will head to Furman in the fall.

But she wants to take care of some business first as she’ll close her high school career on the grand stage.

“I’m happy to get a chance to go back to state and I’m going down there and I’m going to try to win the whole thing,” said Adams, who defeated Powell senior Grace Steely 6-2, 6-1 to at Tyson Park’s Kyle C. Testerman Tennis Center to win the Region 2 Large Schools Singles Championship. “It feels good and I’m glad to go out there and get another chance to win.”

Adams has made it to Spring Fling four times in her illustrious career with the Lady Bulldogs. As a freshman and sophomore, she and doubles partner Brittany Foust made the State Tournament field.

Foust graduated but Adams won the regional singles title last year and made it to Murfreesboro.

Bearden coach Tyler Lane is hoping to see Adams capture a state singles title, but he said that she’s already made history for the Lady Bulldogs.

“She’s one of only two Bearden players to go to state four times,” Lane said of his senior. “She’s one of the best players in ever at Bearden or in Knoxville. I’m hoping to go down there and see her win it.”

While Adams will close her high school career at the Midstate, Steely finished her career with the Lady Panthers on Tuesday.

“She’s helped put Powell tennis on the map,” Lady Panthers coach Cindy Yeary said. “She made it to the state in doubles last year with Kelli Hurt as a junior.

“We’re really proud of her and she finishes her career as the runner-up in the region. Our region is tough and there are some great players.”

Even in defeat, Steely said she learned from her final high school match against her rival and friend.

“I practice against her and she always provides great competition,” Steely said.

In Boys Doubles: Lane, Bearden’s longtime coach, had a bitter-sweet experience as he watched to of his doubles tandems battle for a Region II Large Schools Championship as Grayson Marlow and James Eaves down Daniel Labrador and Jacob Pearson 6-3, 6-4.

“This was bitter-sweet but it was also a very positive experience because we had two teams make it to the region championship,” Lane said. “They all know each other well and they’re all really good friends.”

Labrador’s win sealed the title for the Bulldogs, who will play in the state tournament in Murfreesboro this week.