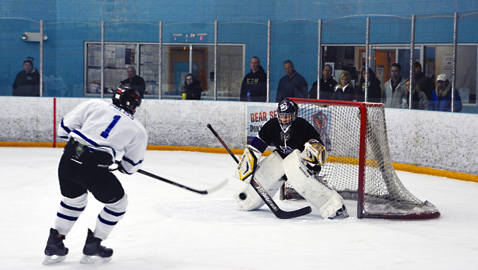 A 6-6 tie left both the Farragut High School hockey club and the Knoxville Knights feeling a little disappointed Thursday night. Neither team was happy with the draw but Farragut coach Jeff Lindsay was especially dejected.

“We had too many stupid penalties and those penalties absolutely killed us,” Lindsay said after watching his squad blow a 6-3 lead and settle for the tie against the Knights. “We played a lot better than we did last week but you just can’t play 5-on-4 like we did tonight.

“They [Knoxville] played a very disciplined game and they didn’t have any penalties and we had too many.”

A pair of third-period infractions proved costly for the Admirals (0-2-2), who are still in search of their first win of the season.

Farragut’s Justin Richwine was called for a double minor early in the third period with the Admirals holding a 6-3 lead. Farragut nearly killed the penalty despite being able to clear the puck once. Admirals’ goalkeeper Tatum Magill appeared to be at the top of her game as she made five saves on the extended power play. She finally surrendered a marker when Jacob Givens scored midway through the final stanza. Givens added another goal approximately a minute later to make the score 6-5.

The Admirals were short-handed for more than half of the third period and the Knights (2-0-2) took advantage of the exhausted Farragut club that managed just one shot in the third period.

“Those penalties just wore us out,” Lindsay said. “Maybe, we should’ve scored a couple of more goals early and I really thought Tatum played well in the net but we did let one get away.”

Josh Maine’s goal with 1:26 to play enabled the Knights to salvage the tie. Knoxville then had a potential game-winner waved off as it crossed the goal crease after the final buzzer.

“It was too little, too late,” Knoxville coach Greg Maine said. “We dug ourselves a pretty deep hole. “We didn’t take care of the puck and we gave up too many shots.

“We had five turnovers and they turned all five of them into goals. I preached about that and I told our guys that if you turn the puck over, they will score. And to their credit, they did.”

Knoxville took an early 1-0 lead when Josh Maine scored with 8:05 left in the opening stanza.

But the Admirals would answer — in a big way — Farragut closed out the period with three unanswered markers. Tyler Starling knotted the game before goals by Kyle Lindsay and Davis Eichelberger gave the Admirals a 3-1 lead.

Eichelberger picked up an assist on Kyle Lindsay’s marker before having his tally set up by Brandon Timmis.

Farragut scored first in the second period. John Barckoff made the score 4-1 before Givens and Augustus Rightmyer responded for the Knights.

Kyle Lindsay and Starling closed the period with consecutive goals to give Farragut the 6-3 advantage before Knoxville stormed back in the final frame.