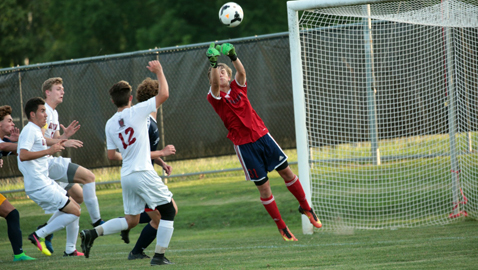 OAK RIDGE — It was a battle. But in the end, Farragut High School’s boys soccer team left Oak Ridge with a Region 2-AAA Championship Thursday night.

The victory netted the Admirals (17-5-1) their first regional title since 2014, which is the last time that Farragut reached the Class AAA State Tournament in Murfreesboro.

Farragut was set to host Kingsport Dobyns-Bennett Saturday afternoon for the right to make a return trip to the Midstate in 2017. The Admirals beat the Indians 5-1 earlier this season. The Wildcats (14-5-2) advanced to its third consecutive state sectional round and were slated to travel to Johnson City to face Region 2 Champion Science Hill. Results for Saturday’s games were not available at press time.

The Admirals entered the weekend having won the District 4-AAA Tournament as a No. 3 seed after notching upset wins over rival and defending state champion Bearden and top-seeded Maryville. Their hot streak continued through the regional rounds despite losing eight starters from the 2016 squad.

“I’m telling you that we lost eight starters and we have a ton of underclassmen,” Dover said. “We don’t have a lot of seniors but the ones that we have, have really held this thing together and maintained their focus.”

It was underclassmen who found the back of the net for the Admirals, who never trailed in the match, against Oak Ridge.

Sophomore Wes Jeter gave Farragut a 1-0 lead in the 19th minute. Jeter, the team’s leading scorer who broke a long scoring drought, would tally again late in the first half after the Wildcats pulled even on a marker by Austin Vinyard in the 25th minute.

Vinyard, a senior forward, nearly gave the Wildcats the lead in the 34th minute, but he shot over an open net.

That was the last quality scoring chance that Oak Ridge would get on this night as Farragut’s defense would steal the show after halftime. The Wildcats only got one shot after the break and that came with 1 minute, 16 seconds remaining in the match.

Farragut senior goalkeeper Mitchell White picked up the win as he replaced Brandon Keane, who was injured in the Admirals’ 7-2 win over Central in the region semifinals Tuesday night.

“Mitchell has waited for this and tonight, it was his moment,” Dover said of White, who began the season as the starter before Keane took over midway through the season.

Jeter said that the region championship was a long time coming for the Admirals.

“It’s been a long time and this feels really good,” he said. “I think the best part of all of this is that we’re all having fun and we don’t ever want this to end.”

The Warriors advanced to the championship game and the state sectional round with a 1-0 overtime win over Carter Tuesday night. Matt Zaczyk scored the lone marker of the match against the Hornets.

Spartans win in Division II-A: Webb School of Knoxville notched a 3-0 victory over University School of Nashville Tuesday to advance to the sectionals. Jacob Cook scored twice for the Spartans, who also got a goal from Cameron Fowler.