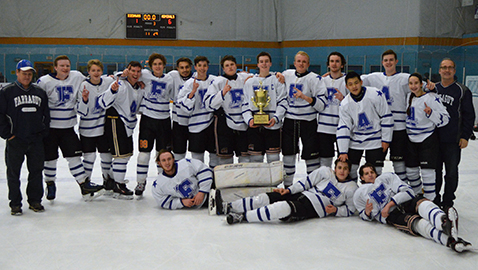 A perfect run recently netted the Farragut High School Hockey Club a fourth consecutive Moore Cup. The Admirals will now enter the Blue Division State Tournament with some hardware and an unblemished 12-0 record.

The Admirals (the defending Blue Division State Champions) and the Ice Dawgs (5-7-1) will both play in the 2018 State Tournament at the Icearium. The two-day event opens with round-robin play on March 10.

Farragut coach Jeff Lindsay has been the head man behind the bench for four season and has guided the Admirals to four consecutive Moore Cup Championships. But he knows that things won’t be easy as his veteran squad attempts to repeat as state champion.

“Bearden is a good team and they’ll do well at state,” Lindsay said.

Things did look a bit easy for Farragut early last week. The Admirals surrendered the first shot of the game. But junior goaltender James Brinkley made a save and his defense kept the Ice Dawgs at bay for the remainder of the first period.

Farragut had 11 shots in the opening frame. The Admirals picked up the game’s first goal when Davis Luna scored on the power play with 7 minutes, 53 seconds remaining in the first period. Christian Callahan was credited with an assist on the game’s inaugural marker.

It was the first of four points (1 goal, 3 assists) on the night for the junior winger.

“Cally really showed up for us tonight,” Lindsay said. “We came out determined.

“They were told in the room before the game that they had better be ready to play and they were.”

KAHA High School League Most Valuable Player Kenny Richter made it 2-0 when he took a pass from Callahan and promptly banged it past Ice Dawgs’ netminder Mathieu Senechal with 2:36 remaining in the first stanza. Richter tallied again 58 seconds later to make it 3-0. His second marker of the game was unassisted.

Bearden did pull to within 3-1 when Shon Dupree scored an unassisted marker early in the second period and the Ice Dawgs had hopes of making a comeback.

But those aspirations were quickly extinguished when Callahan scored his goal midway through the period, making the score 4-1.

“When we got it to within 3-1, we thought if we could get the next one, then we might have a chance to get back in it,” said Bearden assistant coach Tom O’Brian, who ran the team because head coach Mike Raleigh had a prior commitment. “But it just didn’t happen because the Admirals are so good.

“I think our guys gave it all they had but we knew what we were in for. I don’t know about the two teams out of Memphis, but I think we might see them in the finals.”

The one thing the Admirals couldn’t do on this night was stay out of the penalty box.

Bearden had five power plays in the game, including a two-man advantage. The Admirals were also whistled for a double minor, but were able to kill off the 4-minute penalty with relative ease.

“We had some chances on the power play but we couldn’t score because they’re just that good.”

Richter scored his final two goals of the contest with the sides skating 4-on-4. He completed his hat trick with 5.4 seconds to go in the second and closed out the scoring with 11:51 left to go in the final frame.

“Kenny did what Kenny does,” Lindsay said. “He was the MVP of the league for a reason.”