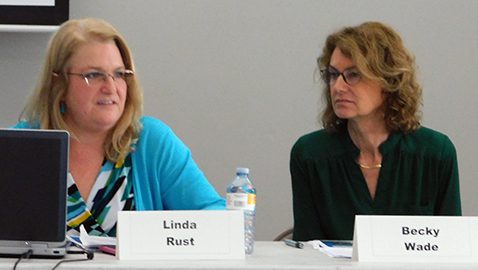 When Knoxville’s Neighborhood Coordinator Debbie Sharp asked the Advisory Council what their main concerns were, the number one topic they wanted to address was affordable housing.

During the NAC meeting last Wednesday, Becky Wade and Linda Rust of the Community Development Department, spoke on the topic. Several of the council members were new and many never have heard the data or what the city is planning.

Rust said affordable housing is part of the city’s Annual Action Plan now being proposed and said that the budget for that effort largely depends on funding provided by the federal government through the Housing and Urban Development grants.

She said the main problem is the lack of adequate housing for low income people as it would take a $17 per hour wage for anyone to afford the average rent on a two bedroom house.  She added that the average two-bedroom   house or apartment in Knoxville now rents for $920 a month.

Rust continued by saying that 54% of the population now rent rather than own a home and that 75% of those people are low income. She added that almost half currently pay more in rent than they can afford.

“The city doesn’t’ own or operate any public housing, that’s KCDC,” she said and then listed several city low-income projects funded with federal, and local home investment grants.

“There is a new development on Clifton Road with 53 units for the elderly and disabled,” she said, adding that the Five Points project will make 462 apartments available.

Rust said that although growth in housing in Knox County is forecast to slow down, the city population is growing faster. She said the “millennial” population is the reason for both jurisdictions as younger people prefer renting in urban areas rather than becoming homeowners.

“There’s only so much land in the city,” she said adding the rental market continues to grow.

She suggested that the neighborhood groups take a more positive attitude about apartments and low-income housing and ask how would such a development contribute to their area. She said that an increase in traffic from those developments might be considered along with buffering, increased school population, and crime.

Rust said that neighbors with questions about a proposed development and affordable housing should contact the city, noting that developers are required to reach out to neighborhoods if there’s any city funds involved with a project.