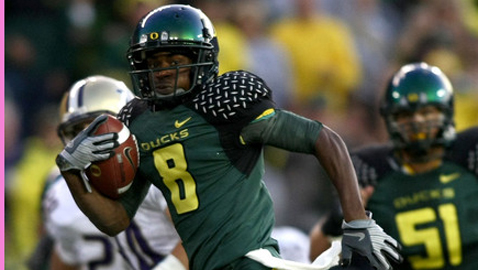 (This is Part 3 of a series on Terence Scott, former Central High football standout who went on to star at the University of Oregon in 2008. Scott crossed many hurdles growing up in Knoxville, and then chased his dream to play Division 1 football. He plans to return home soon and wants to help Knoxville pull together and put an end to recent gun violence and gang activity that has claimed innocent lives.)

The trees and mountains in Oregon weren’t all that reminded Terence Scott of Knoxville and East Tennessee.

Sitting in the University of Oregon stadium on a recruiting visit brought back memories of first experiencing big-time college football and seeing the Tennessee Vols play in Neyland Stadium.

“When I was a kid I used to go to UT games with my friend Tyler Scott and his family,” recalled Terence. “I used to imagine what it would be like having all those people scream for me. And here I was at the University of Oregon having that opportunity.”

Scott quickly knew this was where he wanted to play as a junior and senior. “I don’t know what came over me. At that moment, I told them this is where I want to come and I signed right there.”

Coming off two excellent seasons at the College of the Canyons, Scott arrived at Oregon in 2007, the same year Chip Kelly came aboard as the Ducks’ offensive coordinator and implemented his famous no huddle, fast attack.

Scott was being redshirted his first season at Oregon, but team injuries forced coaches to put him in for one play the sixth game of the season, costing him much of his junior campaign.

“So there went my clock for my junior year,” said Scott recently, looking back on his collegiate career. “All I had left was my senior year for any hope or desire to go on to the NFL.”

Terence was so upset with his redshirt being burned liked that, he pulled away from the football program the following summer.

“When they did that to me I changed,” he recalled. “I lost the fun of football. My attitude changed … I pushed away from the whole organization, changed all of my classes, stopped working out with the team.”

Scott said he “had to come back to the basics” and his roots – Gladiators youth football in Knoxville and Central High football – in order to pick up and continue his college career.

He started getting up at 4 in the morning, did his training on a mountain, made his own food and made sure he went to all of his classes to keep his academics in order.

“That summer,” however, Scott said, “I was told by the receiver coach that Mike Bellotti, Chip Kelly and himself didn’t believe in me anymore because I hadn’t shown up.”

At that point, Scott was willing to settle for any spot on the depth chart.

“Is there any way I can be a possession receiver?” Scott asked. “Just let me come in on 3rd and 20 and I’ll get the first down for you coach.

His approach paid off.

“Slowly but surely guys started getting hurt,” said Scott. “Guys started not doing what they needed to do … I can remember the first day they let me run with the ones. They came down and said, ‘Today you’re going to run with the ones, but you’re not going to play this year.

“Now me knowing me – give me any opportunity and I’m going to take off with it.”

And Scott did just that.

“I didn’t look back,” he said. “I had my best year my senior year. I was the leading receiver when I left. I was the leader of the team. And I did what I said I was going to do when I started – I played Division 1 football.”

According to the Oregon football web site, Scott earned honorable mention on the All-Pac 10 team and won the Dudley Clarke Memorial Award as the team’s most improved player.

The CHS product, who started all 13 games, had career highs of eight catches and 125 yards in his last game for Oregon – a Holiday Bowl win over Oklahoma State.

Scott finished strong, averaging 101.7 yards receiving over his final three games. That included 93 yards and a 76-yard touchdown – the longest reception of the season in the conference – at rival Oregon State and 87 yards and a TD against Arizona.

Terence got off to a great start too, with six grabs for 117 yards, including a 60-yard TD, in the season opener against Washington.

He had a 51-yard scoring run against Utah State in his first career carry and went on to average 14.2 yards on nine carries.

Both of his catches against Stanford (28 yards) occurred during the final two minutes and were a big part of a game-winning 74-yard drive.

Oregon finished with a 10-3 record.

Scott increased his weight to 185 pounds and hoped to be drafted in the National Football League, but that phone call never came.

He later spent his last $100 for a tryout in Portland with the British Columbia Lions of the Canadian Football League. He landed a spot on the team’s taxi squad, but it wasn’t what he thought it would be. “The fun was gone,” he remembers.

Scott spent one season with B.C., and then came back when Pamela was pregnant with their daughter. When he learned his first child was on the way, Scott’s desire to return to Eugene was even greater as he wanted to be with the mother of his child throughout the pregnancy.

Terence said he first thought the pregnancy would motivate him even more to play professionally – providing a means to feed and provide for his family – but it affected him differently. He wanted to be there to go through the pregnancy and birth.

“I remember telling Pamela I’m done,” he said. “I realized football was over for me, because I was excited about my daughter.”

Scott also remembers his last day at practice and a teammate telling him he had left his cleats behind. “He said, ‘You forgot your shoes.’ I said I wouldn’t need them anymore. I was in the real world now.”

Terence’s daughter, Jamiah, is now five years old and he and Pamela also have a 17-month-old son, Terence Jr.

NEXT WEEK: Part 4 – Reaching out to his dad, life in Eugene and saying ‘Thank you’ to Knoxville.