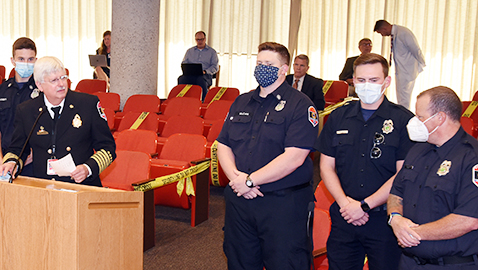 The final lease agreement between Knox County and TVA hasn’t been signed yet but last week the county commission voted to complete a deal with the University of Tennessee to sublet part of the TVA East Tower.

The pending deal between the county and TVA calls for a 15-year agreement with five-year renewals at only 37.5 cents per square foot. Downtown office space normally leases for about $15 per square foot. In turn, the agreement to sublet the top seven floors to UT was approved for $1 per square foot along with $50 per month for each UT parking space in the adjoining Summer Place garage.

Attorney Mark Manantov, who negotiated the agreement, told the commission that the final closing of the lease with TVA may be done by July 1.  He said that UT wants to build an internal stairway in their portion of the tower.

The initial cost to Knox County in moving the school administrative offices to the bottom floors is estimated at about $13.4 million with $6 million coming from the sale of the Andrew Johnson Building. While the county will lease the tower it will purchase the Summer Place complex which houses parking and office space.

“I think we’re good to go,” Manantov said. He added that the agreement with UT doesn’t affect the lease with TVA but adds a bonus to the negotiations.

In other business, the commission honored ten volunteer first responders who traveled to New York to help in the COVID-19 crisis. Rural Metro Chief Jerry Harnish introduced some of those men and said that they helped with administration of response there and coordinated up to 7,000 emergency calls per day.

Chris Davis, Administrator of Elections, informed the commission of preparations for the upcoming elections. He said that more than 5,500 absentee ballot applications have been received so far and said counting what could be 10,000 mail-in votes will begin when the polls open on election day with results being announced after the in-person voting ends. He said he is “overstaffing” the number of election day workers not knowing how many will show up because of the virus pandemic.

Davis told The Focus last week that the presidential primary is not on the August ballot having been resolved in the March election. He said voters will find the paper ballots pretty simple, similar to “fill in the circles just like in kindergarten.”

Davis also said the results in August “could stretch into a second day” because of having to count the expected surge in absentee voting.

Activist Vivian Shipe urged the commissioners to get personally involved with the upcoming U.S. Census and praised Commissioner Carson Dailey for his efforts. She warned that the county, and commission districts, could lose $2,000 per person who is not counted.

“People trust you in your area,” she said, adding, “This is money for your area.”

In what was called his “Swan Song,” Planning Director Gerald Green spoke during his last appearance before the commission.

“I enjoyed working with some of you,” he said, getting a laugh from commission members.

Green said the county is and will face more density, mixed-use development, and needs to revise its Urban Growth Boundary and its General Growth Plan. He quoted George Harrison by saying, “If you don’t know where you’re going, any road will take you there.”

He served for five years and he said he is leaving in 14 days and Amy Brooks will serve as interim director until a replacement is named.

Parks and Recreation Director Paul White announced that Randy Boyd’s family is donating $250,000 for the creation of five dog parks. He called the donation a “huge addition to our park system.”

A design contract with Cannon & Cannon Inc. was approved for widening Coward Mill Road from Pellissippi Parkway to Chuck Jones Drive. The $470,000 agreement comes ahead of roadwork in preparation for a new Northwest Knox County elementary school there.