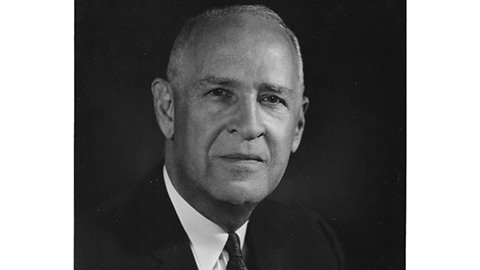 Joseph Lister Hill did not emerge from the hills of Alabama, nor did he have to rise above poverty; in fact he was born into a well-to-do family.  Hill’s father was Dr. Luther Leonidas Hill and the future senator was named for his father’s friend, Dr. Joseph Lister, who pioneered the notion of antiseptic surgical procedures.

Lister Hill was born December 29, 1894 in Montgomery, Alabama.  He was only sixteen years old when he entered the University of Alabama and four years later left with both a law degree and Phi Beta Kappa key in hand.  Lister Hill actually helped to found the student government at the university and it should not be surprising he was its first president.

Hill also continued his studies at both Columbia Law School and the University of Michigan Law School before he began practicing his profession.  Only twenty-three years old, Lister Hill served in the Montgomery Board of Education from 1917- 1922 and served as its chair.

When Congressman John R. Tyson died, Lister Hill ran for and won Tyson’s seat in Congress.  Elected to Congress at age twenty-nine, Lister Hill was one of the youngest members in that body.  Hill had not been in Congress long before he married his wife Henrietta McCormick.  Theirs was to be a long and happy marriage that produced two children, a daughter and a son.

One important factor, perhaps the most important factor, in Lister Hill’s election to Congress was the esteem in which his father was held in the area.  Dr. Hill was also wealthy enough to help finance his son’s campaign.  Yet Lister Hill was no mere fortunate son; over the years he proved to be a remarkable legislator.

Tall, balding, dignified and amiable, Lister Hill would make his mark not only on Alabama, but the nation.

As much of a political asset as his father was, Lister Hill carefully concealed his heritage on his mother’s side.  Mrs. Hill was part Jewish and Lister himself had been raised in the Catholic faith, which he abandoned to become a Methodist,

Hill spent the first several years in Congress under Republican administrations and was able to accomplish little.  With the election of Franklin D. Roosevelt in 1932, Congressman Hill was an exuberant supporter of the new president and the New Deal.  Both came from the gentry and Hill particularly identified with FDR.

Lister Hill supported virtually all of the New Deal legislation proposed to Congress.  Hill, although somewhat reluctant at first, was a supporter of the Tennessee Valley Authority and would do all he could to protect the TVA during his long Congressional career.

Alabama, like the rest of the South, was a one-party state.  The Republicans were never much of a factor in Alabama politics, but the hegemony of the Alabama Democratic Party was rent asunder with the presidential nomination of New York Governor Al Smith.  Catholic and a staunch opponent of prohibition, Smith’s candidacy was not well received in much of the South.  Alabama’s Senator J. Thomas Heflin, a virulent racist, was appalled by Smith’s candidacy and led a revolt that almost delivered the state to Republican candidate Herbert Hoover.  Alabama Democrats had to work very hard to keep the state in the Democratic column that fall.

Although Smith lost the election, he did manage to narrowly carry Alabama.  Angry establishment Democrats quickly passed a law barring any Democrat from running in the primary who had not supported the Democratic nominees, thus casting out Senator Heflin from the Democratic Party.  Heflin, roaring like a wounded elephant, was forced to run as an “Independent Jeffersonian” Democrat, was beaten in the general election by John H. Bankhead, II.

Heflin tried to revive his political career in 1937 when President Roosevelt selected Senator Hugo L. Black to serve on the United States Supreme Court.  Black was confirmed and resigned his Senate seat and a special election was called; Heflin immediately entered the contest.  So did Congressman Lister Hill.

The former senator tried valiantly to win back the voters, telling his famous stories, oftentimes in dialect, thundering his flowery declamations all across Alabama, while Lister Hill calmly made the rounds.  Heflin’s campaign was well financed, as he received strong support from many businessmen who loathed the New Deal.

An effective speaker himself, the young Hill was obviously a sharp contrast to the sagging and aging Heflin.  It was abundantly clear that Tom Heflin was a thing of the past.  Lister Hill beat Heflin badly, ending his political career, although Senator Hill would help to secure his former opponent a sinecure in the Roosevelt administration.

Only forty-three when first elected to the U. S. Senate, Lister Hill quickly rose through the ranks to become a prominent member of the Senate.  Easily reelected to a full six-year term in 1938, Hill became the Majority Whip of the Senate under Majority Leader Alben Barkley.  Some believed Senator Hill would become the first Majority Leader from the South in years, but the shrewd Alabamian resigned his post when it became clear he could not support the civil rights policies of the national Democratic Party.

Considered a rising star in his party, Hill was given the honor of placing into nomination the name of Franklin D. Roosevelt at the 1940 Democratic National Convention.  Hill’s traditional Southern oratory and pronounced Southern accent became fodder for many of those opposed to President Roosevelt and the Alabama senator had to endure a torrent of abuse from the opposition press for his speech.

In 1946, Lister Hill introduced legislation that is still well remembered today.  Along with Ohio Senator Harold Burton (whom Harry Truman would appoint to the U.S. Supreme Court, despite Burton being a Republican), Hill introduced the Hill – Burton Act.  Hill – Burton provided substantial money to build hospitals across the country, especially in rural areas where residents had to oftentimes travel long distances for proper medical care.

As Chairman of the Senate’s Labor and Public Welfare Committee, Lister Hill, inspired by his father’s medical career, worked hard on health issues.  Senator Hill became the most powerful advocate on Capitol Hill for federal funding for medical research.  Through the years, Hill’s leadership funneled literally billions of dollars into research, allowing for significant advancements in treating many dread diseases.

Senator Hill was also a passionate spokesman for aid to education and he and Alabama Congressman Carl Elliott introduced and passed legislation to provide federal money for libraries.  The two also sponsored the National Defense of Education Act, which provided vast sums of federal money for education.  The Hill – Elliott Bill still helps many struggling students to acquire college loans for their educations to this day.

Lister Hill remained highly popular in his home state of Alabama and was reelected easily in 1944, 1950 and 1956.  In 1962 Senator Hill faced no real opposition in the Democratic primary, but he faced a Republican challenger.

Jim Martin was young, vigorous, and appealing on the medium of television.  Martin also caught the senator napping.  Lister Hill only barely edged out Martin in the general election.  It was the closest race of his long career.

Alabama politics was also changing.  The decade of the 1960s saw the rise of George Wallace, who would dominate Alabama politics for years to come.  Hill and his protégé Senator John Sparkman, both strong supporters of the New Deal, soon began to represent an age gone by.

Wallace’s politics of confrontation and race baiting was painful to both Senators Hill and Sparkman, who had not engaged in the virulent racism of many Southern politicians.  More than a few Alabamians began to grumble that Hill and Sparkman were not sufficiently vigilant on behalf of white citizens.

Still, Lister Hill knew his continued political survival depended upon his opposition to civil rights legislation and he dutifully voted against it at every opportunity.  Yet his rhetoric was not the language of George Wallace or Mississippi Governor Ross Barnett.  Lister Hill was too patrician and dignified a man to stoop to vulgar racism.

During his last term in the United States Senate, Lister Hill continued to work on issues relating to health and education.  He was recognized time and again for his legislative accomplishments and Senator Hill was an integral part of President Lyndon Johnson’s Great Society.

Hill faced the people of Alabama again in 1968 and he concluded at age seventy-four he did not care to go through yet another strenuous campaign.  Hill knew he might have to wage both serious primary and general election campaigns, as many Wallace supporters were urging Lieutenant Governor James B. Allen to run for the United States Senate.

Senator Lister Hill announced he would retire and return to his home in Montgomery.  A hotly contested primary between Congressman Armistead Selden and Lieutenant Governor Allen determined the next senator and Jim Allen would serve until his death in 1978.

Lister Hill occasionally corresponded with former colleagues and watched events at a distance; he had served in Congress from 1923 until his retirement in 1969.  Hill would make infrequent appearances when he was honored or given an award for his many legislative achievements.

The former senator died on December 21, just days short of his ninetieth birthday.

Henrietta Hill, the senator’s widow, wrote a book of her life with Lister and time in Washington, which is especially charming.  It is an excellent record of life in the nation’s Capitol during both the Great Depression and World War II.

Lister Hill was one of those rare politicians who both took care of the folks back home and managed to sponsor and pass important legislation.  His was an amazing life.