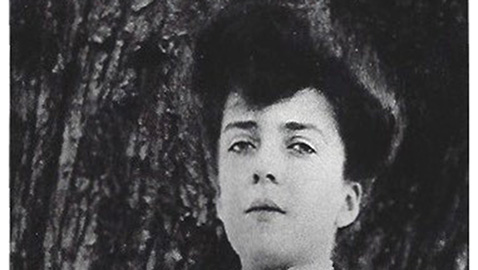 The eldest child of Theodore Roosevelt from his first marriage, Alice’s arrival into this world could not have been worse. TR was only then beginning his political rise, serving as a New York state assemblyman. Just after Alice’s birth, her mother, Alice Lee Roosevelt, died of kidney failure. If that blow was not enough for Theodore Roosevelt, his mother, Martha Roosevelt, died the same day of typhoid fever. The death of his beautiful young wife almost crushed Theodore Roosevelt; for the remainder of his life, he rarely ever spoke about her, nor was Alice Lee’s name to be mentioned in his presence. The loss was so difficult to bear Roosevelt never even alluded to his first wife in his autobiography. Unable to cope with the death of Alice Lee, Theodore Roosevelt left New York for Elkhorn Ranch in the wilds of North Dakota and remained there for two years.

Alice, known as “Baby Lee,” was turned over to Theodore Roosevelt’s sister, Anna, known in the family as “Auntie Bye” or “Bamie.” Fortunately, Auntie Bye cared for Baby Lee lovingly and she remained a dear figure to Alice for the rest of her life. Alice only returned to her father’s house when Theodore Roosevelt married again. There were sometimes tensions between Edith Carow Roosevelt and Alice, but by the end of Alice’s stepmother’s life, it was clear the two loved one another. In her autobiography, Alice acknowledged and praised Edith’s skill as a stepmother, writing, “That I was the child of another marriage was a simple fact and made a situation that had to be coped with, and Mother coped with it with a fairness and intelligence which she has to a greater degree than almost anyone else I know.”

Together Edith and Theodore Roosevelt had four children: Theodore, Jr., Archie, Ethel, and Quentin. Being the eldest, Alice was known as “Sister” throughout the Roosevelt family. Whenever Alice was at odds with her father and stepmother, it was Auntie Bye who proved to be her solace and sanctuary.

Never one to conform, there were the ordinary, as well as extraordinary conflicts between Alice and her parents, which included her smoking cigarettes, staying out late to attend parties, gambling, driving a car and many other things that were considered quite nearly scandalous for a woman of the time. Throughout her long life, Alice Roosevelt Longworth cared little for societal conventions; in fact, she took great delight in violating such conventional behavior. When young Alice was found to be smoking in the White House, President Roosevelt thundered he would not have his eldest daughter smoking cigarettes under his roof. Alice promptly retreated to the roof of the White House and continued to smoke to her heart’s content. Once, when a friend commented on some aspect of Alice’s behavior, President Roosevelt sighed and replied he could either tend to Alice or run the country, but he could not possibly do both.

Alice was a fully independent woman long before it became an accepted notion in the United States. Not only was Alice independent, willful and a free-thinker, she was also not lacking in self esteem or self confidence. Even at a young age, Alice Roosevelt was a force to be reckoned with, a fact readily acknowledged by her father who shared many of his daughter’s personal traits.

When Theodore Roosevelt became President of the United States following the assassination of William McKinley in 1901, Alice was delighted by the opportunity to move into the White House. In spite of her refusal to play the traditional role allotted to women during the early 1900s, the public took to Alice with a voracious interest and she liked the attention. Making her social debut in Washington, D. C., she wore a shimmering gown that was promptly dubbed “Alice blue”, which immediately became a hugely popular color in the country. The rebellious Alice began to set fashion trends amongst young ladies and women in the United States.

Like their father, the Roosevelt children adored pets and during Theodore Roosevelt’s presidency, the White House became a virtual zoo and Americans relished the new stories coming out of Washington about the president’s small sons taking their pony into the residence. Alice had her own pet and of course it was a highly unusual pet, especially for a woman; Alice frequently carried a green snake she named Emily Spinach in her handbag.

Alice accompanied a delegation of Americans to visit the Far East in 1905 and President Roosevelt assigned his amiable Secretary of War, William Howard Taft, to watch over his daughter on the trip. The future president and Chief Justice of the U. S. Supreme Court seemed to be able to do no more than her father in controlling Alice’s behavior. Alice jumped into the pool of the ship carrying the delegation to their destination fully clothed, an incident Robert Kennedy brought up when visiting with Mrs. Longworth decades later. Kennedy pointed out that was rather a scandalous thing to do at the time, causing Alice Roosevelt Longworth to retort it would only have been scandalous to do so had she removed her clothing.

Alice was not unaware of her similarity to her father’s love of attention, of whom she once said, “He wants to be the bride at every wedding, the corpse at every funeral, and the baby at every christening.”

It was on the trip to the Far East that Alice met a congressman from Cincinnati, Ohio, Nicholas Longworth. Nick Longworth was from a wealthy and respected family, a politician, and eligible. It seemed like a perfect match and the announcement of their engagement to be married was the talk of Washington society. Still, there were reasons to be concerned about the match, especially by Alice’s parents; Nick Longworth liked to drink, was fourteen years Alice’s senior, and had a reputation as something of a ladies’ man. Alice was not to be moved and the wedding, held at the White House in February of 1906, became the biggest social event of the season in the Capitol. Instead of the usual white, Alice wore a blue wedding gown and cut her wedding cake with a sword borrowed from one of the President’s military aides. Nick Longworth and his bride promptly left for their honeymoon, which included a visit to Cuba, as well as his family home in Cincinnati. Alice much preferred the other stops on their honeymoon itinerary to Cincinnati, which she never grew to like. Quite the contrary, she considered her husband’s home city to be dreary and boring, a world away from Washington, which had become her own home. Alice was also highly interested in what she frequently referred to as the rich trove of “loot” sent to her as wedding gifts by heads of state and monarchs across the globe.

As the gifts began to pour into the White House from all over the world, an alarmed President Roosevelt belatedly tried to issue a ban on presents. Still, King Edward VII sent a blue and gold enameled snuffbox whose lid was covered in diamonds. The President of France sent along a Gobelin tapestry that was considered almost priceless by some. Germany’s Kaiser Wilhelm sent a diamond bracelet. The Dowager Empress of China, not to be outdone by anyone, presented Alice with a hand-carved teak chest and each drawer contained a lavish gift, including jewelry, Chinese paintings, a fox coat, an ermine coat, and bolts of pure silk that Alice had made into dresses she wore for the rest of her life. Japan’s royal Mikado sent pure silver vases, but Alice’s favorite gift was a string of sixty-two flawless pearls with a diamond clasp, worth perhaps a million dollars today. In fact, Alice received so many gifts that there were a considerable number discovered unopened at her death seventy-six years after her marriage to Nicholas Longworth.

Congressman Longworth and his wife eventually bought a house near DuPont Circle in Washington, D. C. By the time Nick Longworth bought the home at 2009 Massachusetts Avenue, it had been enlarged to five stories consisting of twenty rooms and six baths. The house on Massachusetts Avenue remained home to Alice Roosevelt Longworth until her death in 1980.

When Theodore Roosevelt willingly left the White House in 1909, Alice was so resentful she allegedly buried a voodoo doll of the new First Lady, Helen Taft, on the grounds. Alice’s penchant for insulting Mrs. Taft eventually led to her becoming persona non grata at the White House. When TR thought better of having retired too early from a job he loved and sought to wrestle the 1912 Republican presidential nomination from William Howard Taft, Alice was delighted. She threw herself wholeheartedly into the campaign, causing serious tensions in her own marriage as Theodore Roosevelt urged his son-in-law to remain loyal to Taft. Nick Longworth was in a terrible personal and political quandary as he came from Taft’s home state of Ohio. Still, Roosevelt carried Ohio in the GOP primary, an utter humiliation for Taft. When President Taft narrowly managed to win the Republican nomination from Roosevelt in Chicago, TR immediately cried theft and bolted the party, forming the Progressive or “Bull Moose” party. Alice followed her father while her husband was left as the Republican nominee for his congressional seat in Cincinnati. The spilt between Roosevelt and Taft allowed the Democratic nominee, Governor Woodrow Wilson of New Jersey, to handily win the general election. Still Theodore Roosevelt’s personal popularity and force of personality allowed him to run second to Wilson, while William Howard Taft ran a poor third. Nick Longworth, facing both a Democrat and Progressive candidate on the ballot, barely lost his reelection campaign by 101 votes.

Alice did not go unpunished, as she was forced to live in Cincinnati with her husband for almost two years. For someone like Alice Roosevelt Longworth, languishing in Cincinnati instead of residing in Washington, D. C. was like being banished to the cold and barren regions of outer space.

Even though Nicholas Longworth won back his seat in Congress in the 1914 election and remained there until his death in 1931, there is some reason to believe his marriage to Alice was never the same after the disastrous 1912 campaign. Nick seemed less discreet about his string of mistresses and his drinking increased. Alice seemed not to mind the mistresses as much as the drinking, as she always hated drunkenness. Indeed, Alice’s consideration of Nick’s several long-time mistresses after his death shocked some and scandalized others.

Alice Roosevelt Longworth embarked upon an affair of her own with Senator William Borah of Idaho. Borah, the “Lion of Idaho” and a Western progressive was a compelling and magnetic personality. Alice and Borah shared many common interests, not the least of which was fighting American entry into the League of Nations, a cherished dream of President Wilson.

Alice would prove to be influential in the United States Senate’s refusal to join the League of Nations.