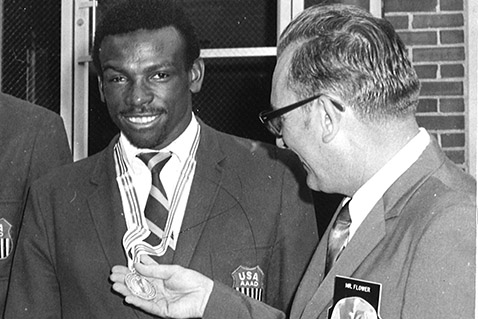 Integration in the South in 1965 also included the deaf schools and Willie Poplar became the first Black to play football at Tennessee School for the Deaf that year.

To this day, 57 years later, Poplar remains the school’s most decorated athlete and will be inducted into the 41st Greater Knoxville Sports Hall of Fame class Thursday night at the Knoxville Convention Center. Willie is being honored in the “All-Around” category.

Troy Haydon, a former coach and longtime athletic director at TSD, had a lot to do with launching Poplar’s remarkable prep career. In the spring of ’65, Haydon got permission from the school’s superintendent to bring any Black boy who would be 14 years old by Sept. 1 to TSD.

Willie, who was born in 1949 and had been attending the Tennessee Negro School for the Deaf on Dandridge Avenue in East Knoxville, fit the age requirement and was the first to show up on the TSD campus in the Island Home area of South Knoxville to join spring practice with the Vikings.

It didn’t take long for Haydon to see what kind of special player he had.

“He was about six feet tall at that time and had a big ole foot on him and he was all legs,” recalled Haydon, who is now 83. “You could look at him and tell he was going to be an athlete.

“The main problem we had was figuring out where we were going to play him, because he could play any position. He was a natural athlete. We were pretty much set at a lot of the positions and decided to try him at end. He looked like a tight end to me. He could catch anything you threw to him.”

Willie competed for the USA in two Deaflympics (in August of 1969 at Belgrade, Serbia and in July of 1973 at Malmo, Sweden). Over 30 nations were represented each year and Poplar was the silver medalist in each event.

And just as important, “He was a big reason why integration went so smoothly at our school,” said Haydon. “The kids loved Willie, the football team loved him and he was just the kind of kid you wanted to be around. He smiled all the time.”

Poplar loved TSD too because it had more sports programs and the camaraderie between the students and staff allowed everyone to get along. “I connected well with the people there,” he said last week on a deaf relay phone call.

Haydon looked out for Poplar, too.

“Willie was hard of hearing and back in those days, the kids wore hearing aids,” said Haydon. “Of course, they had wires running down the side and a battery operated thing that they had in their shirt pocket.

“Well, Willie didn’t want to wear any hearing aids, so he just put in a portable radio and ran that up to his ears,” said Haydon. “And he’d come boppin’ across campus listening to music. I said ‘Willie, you got to watch that. They’re going to find out that’s not a hearing aid and they won’t let you do that. You can listen to it, but don’t let them know you’re boppin’ around campus to music.’”

TSD had around 300 students at that time.

Poplar (6-1, 165) played end in football offensively and defensively and also kicked off, frequently putting the ball in the end zone.

In basketball, he was a forward and strong rebounder. He played hard and once made a shot and ran into a pole and had a front tooth knocked out.

The shot put was his best event in track and field. He won the TSSAA state championship his senior season with a state record toss of 56 feet, 1 inch that remained in the record book for 10 years, said Haydon.

“He had fantastic speed across the shot put circle and unbelievable form. When he stepped up and threw that thing, all the big guys’ mouths would drop open because his toss was usually at least 10 feet farther than everybody else.”

Haydon, who retired in 1990, added: “Probably in my time, Willie was the best all-around athlete TSD ever had. He definitely was the best field athlete in school history, according to the records. In addition to the shot put, he also won the high jump in most of his meets and ran the high hurdles.”

An example of Willie’s popularity among the student body came to light even more 25 years after his high school graduation. Phillip Puckett, who was one of Poplar’s best friends at TSD, but not an athlete, asked Willie to be his ‘best man’ at his wedding, and Poplar did, according to Haydon, who attended the event.

Haydon hasn’t seen Willie since then, but definitely plans to attend this week’s Hall of Fame induction.

Poplar is looking forward to seeing Coach Haydon as well.

“Troy was just a fine man, teacher and coach,” said Willie. “He taught me more than the game. I learned a lot from him.”

Since his high school days, Poplar, who still lives in Knoxville, worked 20 years at TVA. He turned out to be a good bowler, too, averaging around 180.

He and his wife, Florence Scott-Poplar, have been married 36 years and have two grown sons, Jason and Josh. By the way, Josh was a standout football player at Central High and Tennessee Tech.

Willie and his wife currently are raising their niece and nephew, who are sophomores at Central.

ASL (American Sign Language) students from Central will have a table at the Hall of Fame ceremony to assist Popular with communicating with those who would like to speak with him and extend their congratulations.

The event’s featured speaker will be former Atlanta Braves standout Chipper Jones, an eight-time All-Star who was inducted into the National Baseball Hall of Fame in 2018.

SPECIAL GATHERING: The Hoyt Carroll family invites all who knew Hoyt to a “meet and greet” at Chesapeake’s West Wednesday from 5:30 to 9.