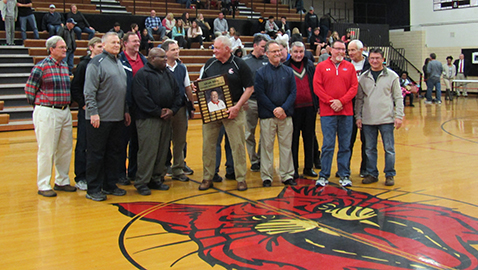 A surprise for Alvah Bible didn’t turn out to be a total surprise as planned, but Central High School’s mission to honor its former longtime sponsor of the school’s Fellowship of Christian Athletes program was accomplished.

“I knew they were doing something,” said Bible, following a ceremony in between the girls’ and boys’ basketball games at Central Tuesday night, Jan. 23. “I didn’t know it was quite this detailed.”

In 2000, the FCA honored Bible, who served as Central’s sponsor for 32 years.

“This is what we call the Alvah Bible FCA Influence Award and it is for a coach or volunteer to FCA that has just been an exceptional example and a great leader on their campus or in their community,” said Dean Craig, the multi-area director for FCA’s 67 schools in a 16-county area in which Knox County is the “hub” in East Tennessee.

“Alvah was the first coach we recognized in this way and he was the namesake of the trophy because he certainly has been an outstanding person and a great leader in the Central High community.”

There have been 17 recipients of the award since Bible’s selection and Athletic Director JD Lambert said CHS wanted to place a permanent plaque in the school gymnasium to honor Bible and the annual recipients.

The plan was for Bible to think he was only coming to Central last week to present the 2017 award to Phillip Beeler of Karns.

“Somebody let the cat out of the bag,” admitted Bible. “They wanted to do something about a plaque. But I didn’t dream about all the people and the ex-award winners being here. I thought that was pretty neat to get that many people to come out over a period of that many years.

“I was very humbled.”

Three “hiking buddies” – Lynn Hill, John Miller and Gordon Sisk – presented Bible with the special plaque as many of the previous recipients of the award looked on at center court.

“Thirty-three years he taught here and coached about every sport,” said Lambert.

Beeler, who has been Karns’ FCA sponsor for 22 years, added, “Coach Bible deserved every bit of it. It was good to see all the guys get back together. It was really special for him. He’s a unique, special guy.

“The large turnout just shows you how much he’s loved by the community and by all.”

Bible recalled Tom Schumpert working with FCA when he first arrived at Central.

“He asked me to take it over and that’s when I started in the fall of ’72.

“Dwayne Sanders I think was very influential in me receiving the first award,” added Bible. “He was the FCA guy and would come to our school and I’d meet with him a lot of times.”

Bible graduated from Corbin High (Ky.) in 1967 and received a football scholarship at Tennessee, where he was an offensive tackle. He also was involved with the FCA while at UT.

“We had a small FCA group at UT, including teammates Steve Robinson and John Keller,” said Bible. “That’s where I got involved with it. We would speak at youth activities and churches. There were only just a few of us, but we did that quite a bit.”