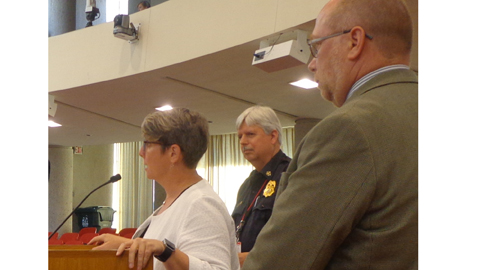 The early renewal proposal for ambulance service in Knox County saw lots of discussion and questions during the Knox County Commission’s work session last week and the issue may come to a head today during the regular meeting.

The Knox County Health Department is asking to renew a five-year agreement with the ambulance service although the current agreement doesn’t expire until September of next year.

The discussion last week pitted some commission members against each other and saw various representatives of AMR-Rural/Metro responding to questions about billing, service, response time and company ownership brought up, initially, by Commissioner Charles Busler. Commissioners Evelyn Gill, Carson Dailey and Michelle Carringer also had some pointed comments about the matter.

Commissioner Busler said that he wants to know more about KKR, the possible  new owners of the parent company AMR, how 911 calls are distributed, and why an EMS Cost Review Board hasn’t been named to oversee the agreement. AMR-Rural/Metro provides ambulance service in Knox County and the parent company also provides fire response.

Busler made a motion to re-bid the contract instead of approving the renewal. Commissioner Brad Anders responded with a “point of order” and moved to approve the proposed agreement. Commissioner John Schoonmaker charged that Busler’s questions “got shut down” and then Anders said he would pull his motion so discussion could continue.

Busler then called for a 60 or 90-day delay on a decision and repeated that an overseeing board, including one commissioner, has never been named.

Knoxville Health Department Director Dr. Martha Buchanan told the work session that the review board was not an active body and wouldn’t be convened unless a fee hike by AMR-Rural/Metro is requested.

Chris Blach of AMR-Rural/Metro joined Dr. Buchanan at the podium and reminded the board that no fee hike has been requested.

Busler then asked why a fire truck is sent to a caller who is only asking for transportation by ambulance and why two charges are sometimes made.

Fire Chief Jerry Harnish joined Buchanan and Blach and said that AMR-Rural/Metro dispatches the closest emergency vehicle. He said that although the same company owns both fire and ambulance services, each service operates independently.

“We’ve got to get an understanding,” Busler said and added that some people who do not subscribe to either service are threatened with a lien on their home unless they pay the bill.

Dailey said that he’s concerned about the health department’s review of AMR-Rural/Metro given the service’s low grades on some responses and said that last year the service was fined for its low scores.

Dr. Buchanan said that in those categories, such as response time, the only option was to score a zero or a two. Given the choice the “zero” was the best choice. She said that the company answered some of the questions with what they are doing nationally, not locally.

“I just thought they didn’t answer the questions,” she said.

“They are trending better this year,” she said, adding that performance by AMR-Rural/Metro is reviewed monthly.

“This is probably the biggest decision I’ll make,” Dailey said.

“I think we need more time and it is aggravating to me,” he said, noting that the request for the early extension came only one week before the meeting. He suggested that a commissioner be designated to meet with the health department during reviews of the fire and ambulance service.

“Why so quickly?” asked Carringer, referring to the request to renew the agreement. She called the fines levied on AMR-Rural/Metro “red flags.”

Dr. Buchanan responded that the early request is because it takes several months to put such an agreement up for bids.

Commissioner John Schoonmaker said that the fines imposed resulted from self-reporting by AMR the owner of AMR-Rural/Metro. He said advance information from the health department to the commission would have been useful.

Anders responded that the county pays AMR-Rural/Metro “zero dollars” and then complains about the service.

“You don’t throw the baby out with the bath water,” Anders said.

“Some things are left out of the proposal. Some people can’t afford the service,” Busler argued, referring to the non-subscribers in the county. He said someone needs to see that individuals get reasonable bills.

Anders then moved to pass the resolution on to today’s regular meeting with “no recommendation” and Chairman Dave Wright said the discussion would continue then. For a minute or so Wright consulted with County Law Director Richard Armstrong and several of the commissioners chatted with each other away from the microphones.

The motion by Anders to substitute his motion of “no recommendation” passed with only Busler voting “No.”

Then the actual motion was made and the commission split with Carringer, Gill, Busler and Dailey voting “No.” Chairman Wright passed. The issue and the debate will continue in today’s meeting.