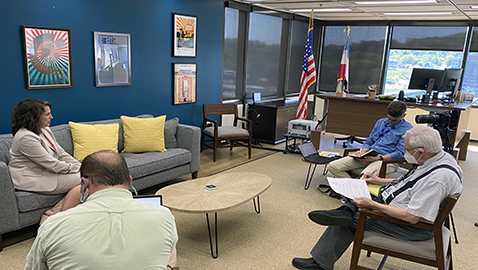 Knoxville Mayor Indya Kincannon invited various members of the media into her office Tuesday to answer questions about her proposed budget. The Knoxville Focus joined News-Sentinel’s Tyler Whetstone and Scott Barker of Compass for a round and each person asked questions in rotation.

The Focus asked about cost increases for the proposed Safety Center at the former St. Mary’s Hospital and why expected federal relief funds are not included in the budget.

“We don’t know yet,” she replied, explaining there’s no guidelines yet as to how the promised federal money can be used. The city is expecting about $44 million in the American Recovery Act.

About $20 million in additional city funding was approved by the city council recently because of delays in demolition and construction of the new Safety Center because of COVID-19 affecting the cost of materials. The facility will eventually house the police and fire departments as well as an E-911 back up facility, an LMU Nursing School, a partnership with Knox County Schools for Fulton High School, City Court, Pension Board, etc.

The Focus also asked about the Washington Pike improvement project and learned the project will stretch to Murphy Road with new turn lanes, bike paths on either side and a bus stop.

Within the budget is $400,000 to expand the police’s co-response team which pairs behavioral health specialists with crisis-trained officers.

The Focus also asked about the city’s plans to eventually have an all-electric bus system. The budget has $1.3 million to support KAT’s conversion of the fleet and $150,000 for additional electric charging stations for the city and public use.

Knoxville currently has five electric buses and 12 more coming this year with hopes to use some of the federal recovery funding for those. The conversion to electric power is expected to take 8 to 10 years

The mayor said the key components of the proposed budget include public safety, health and connected neighborhoods, a clean and resilient future, thriving businesses and good jobs, and good governance. She also noted that city employees will receive a 2.5% raise and noted the city, during the pandemic, had no layoffs or lapses in city services.