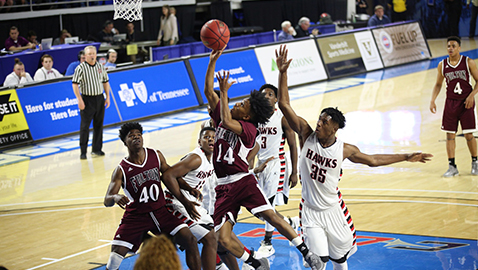 Trailing by eight points at halftime, Coach Jody Wright’s Falcons caught up and then held on for a breath-taking 73-72 double-overtime win over Nashville Stratford in Class AA semifinal action Friday night at Murfreesboro.

Wright said the Falcons don’t scoreboard watch. They just go after stops and buckets and the score takes care of itself.

The winning edge over Stratford clearly came at the free throw line, where Fulton made 18 of 23 foul shots, while the Spartans converted only 9 of 19.

Trey Davis led the way in that department for the Falcons as he was a perfect 11 of 11 at the line.

Davis, a 6-foot junior wing, had an outstanding game overall as well, scoring a game-high 23 points and recording eight assists.

Sophomore teammate Edward Lacy also was a perfect 4 for 4 on his free throws and totaled 20 points. Deshaun Page worked inside for 17 points and eight rebounds. He also had five steals.

Stratford (25-7) had a balanced attack, with four players scoring in double digits, including Jahari Reed and Ivan Buford with 14 points each. Juwon Carpenter tallied 10.

Michael Wallace (10 points and 12 rebounds) was a force inside for the Spartans but fouled out in the first overtime period.

Carpenter also picked up his fifth foul in the second OT and another starter, Kevonte Boyd, appeared to be hobbled by leg cramps down the stretch. But Stratford continued to battle.

Fulton trailed by four points with 1:56 left in regulation play. Josh Berry pulled the Falcons within one with a rebound basket and one. Two free throws by Trey Davis put Fulton ahead by one.

Berry made one of two free throws with 29.1 seconds to go to give the Falcons a 51-49 lead, but a jumper by Reed with five seconds left tied it.

In the first overtime period, Page muscled in a shot, after Lacy grabbed a loose ball, to put Fulton ahead 58-56. But Stratford pulled even again when Boyd hit a runner with 15 seconds to go.

Fulton led by five points several times in the second OT, but Stratford wouldn’t go away and closed within one in the final minute.

Buford was fouled on a 3-point shot with 2.4 seconds on the clock, but made only two of the three free throws, leaving the Spartans short by one.

In the quarterfinals, Fulton trailed Jackson South Side by one point at halftime and by two points after three stops, but outscored the Hawks 23-12 in the final period for a 61-52 win.