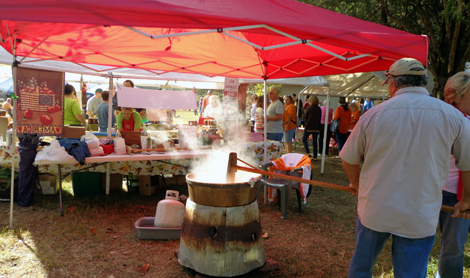 It was the 38th annual Apple Festival at the Washington Presbyterian Church in Corryton and this year’s  event drew thousands of people. Held behind the historic cemetery of the church, which was founded in 1802, the festival featured everything from Bar-B-Que pork ribs and a children’s scavenger hunt to apple butter making, an apple pie contest and auction.

Several tents of various sizes housed different venues, all in support of four causes: The Morgan-Scott Project, Wesley House, Wallace Mobile Medical and the Local Presbyterian Aid program. All the money raised at the festival went to those organizations.

The festival had a silent auction, a country market, and in the Grandma’s Attic tent a variety of items, from video movies and books to computer parts and TVs, were for sale. The “Fill a Bag for $2” drew a lot of interest.

People lined for free apple cider at another tent and hundreds took to the tables to enjoy the Bar-B-Q Dinner or bought fresh fried apple pies. The festival also featured a bake sale and a raffle for a quilt to be won by the lucky ticket holder.

Musicians played at the main tent and one of the groups, Just Passing Through, featured a flute and autoharp along with the other instruments.

Ella Smith, Director of the Morgan-Scott Project, greeted visitors and explained the group’s cause of helping people in Morgan and Scott Counties. Current programs and services include a thrift store, a bread day, emergency aid, school tools, home repair, job programs, providing seed and plants, a free medical clinic, food and supplies and even Christmas gifts to more than 2,200 children each year.

Sue Clapp and Vicki Williams of Wesley House shared the tent with the Morgan-Scott Project and Clapp told visitors that Wesley House is a Christian ministry to empower children and families through service and education. Their Community Center serves the Mechanicsville, Lonsdale and Beaumont neighborhoods.

Over in the pie contest tent Peggy Shipe, Kelly Shipe and grandson Elliott Vasconcelos guarded the many apple pies awaiting a judge. The pies were later auctioned off to the crowd.

The church’s Annual Apple Festival, at 7405 Washington Pike, was by any estimate a huge success.a