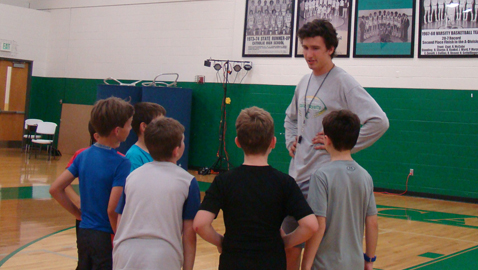 Hutchens, the school’s longtime boys basketball coach, and his players make a habit of spreading the game that they love to those who may become the next generation of Irish boys basketball players at the Catholic Boys Basketball Skills Camp.

“Three of our varsity starters were in this camp from the time they were eight years old,” said Hutchens, who has guided Catholic’s boys basketball team for nearly three decades and led the Irish to an appearance in the Class A/AA State Championship game in 2017. “This is where I found [point guard] Luke [Smith].”

Smith, who recently graduated after a stellar career with the Irish, was working with young players at the camp Thursday morning.

“He called me and wanted to know what time this started,” Hutchens said of his former star.”

Joining Hutchens and Smith were current Irish players and assistant coach Tony Scott. Many of the Catholic players who worked the camp were on last season’s team that went 31-2 and lost to Maplewood in the state title game.

Getting a glimpse into the potential future of the program is only part of the camp’s purpose.

“If they have fun, then they learn something.”

One Catholic player, Brock Jancek, said that he relishes the opportunity to work with young players.

“It remember coming to camps like this when I was a kid and it was always fun,” said Jancek, a rising senior center and one of the Knoxville Interscholastic League’s top players. “The camps weren’t here because I lived in Cincinnati.

“It’s always fun to come in here and work with kids. It makes me a better player when I teach the game.”