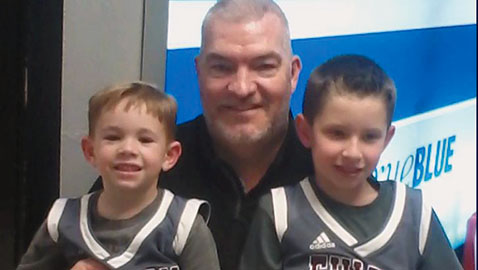 Fulton High head basketball coach Jody Wright was in the post-game media room with some of his players talking to reporters after the Falcons’ overtime quarterfinal win over Memphis Mitchell in this season’s TSSAA state tournament at MTSU in Murfreesboro.

But what caught this reporter’s eye was the little boy standing just to the right of Coach Wright. Who is he I wondered. So I walked over to him, with my microphone in hand, and started interviewing the youngster.

The little boy turned out to be 5-year-old Tate Cox, the son of Fulton assistant coach Jonathan Cox.

Two days later, Tate and his 8-year-old brother Sully were both in the media room with the Fulton head coach and players following their semifinal win over East Nashville.

Coach Wright was asked to comment on the Cox youngsters and their relationship with the team.

“I’ve been at Fulton a long time and my girls (Lauren and Mollie) were raised and spent time with me on the bench,” said Wright. “I’ve even pulled a tooth of one of them in a middle of a ball game. Coach Cox has got three young boys – and the youngest one (Nash) is about a year and a half old.

“They love the players and they love spending time with them. We kind of have a family atmosphere at Fulton. So what better way to spend time with your kids than doing it around a good bunch of players and a good team?

Baby Nash may not have been in the media room, but he was at the state tourney, said Wright.

“He hasn’t missed a game. He’s a little bit young to be down on the sidelines right now,” chuckled Coach Wright. “He’ll be down there in a few years.”

Nash most likely was with his mom, Meredith, in the stands.

The boys’ paternal grandparents also have ties to basketball. Johnny Cox is a longtime referee and his wife, Karen, has kept the scorebook at high school games for around 40 years.

Fulton basketball is family and that certainly was evident at this season’s state tournament.