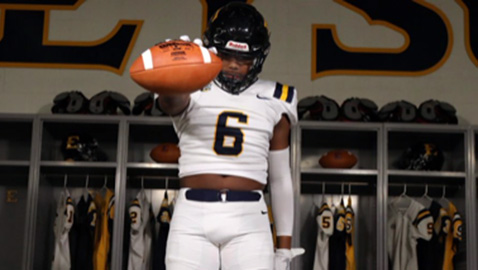 Trey Foster was a versatile performer at Austin-East High and is probably best known for combining for 4,149 yards and 45 touchdowns passing and rushing during the 2019 football season. The All-State quarterback also played basketball and was on the track team in his prep career. He took part in another performance outside of the traditional sports, too.

“During his time in school he has participated in all sports and was a member of our dance company,” said football coach Jeff Phillips in his comments regarding Foster’s selection as A-E’s male Student-Athlete of the Year for 2019-20. Foster’s versatility may pay off for him in football at East Tennessee State.

Prior to his signing with the Buccaneers early this year, Coach Phillips said, “He is not concerned about the position he plays. Trey can play any position a school would like for him to play and play it at the highest level, all because of his work ethic, determination and passion.

”Foster achieved a 3.1 GPA and received a 19 on the ACT, and his goal is to major in Exercise Science (kinesiology and physiology),” said Phillips.

“Trey is an exceptional young man; he is extremely loved by everyone in our building,” added Phillips.

“He has worked extremely hard during his high school career and has overcome obstacles that most adults aren’t able to. He has done this all while smiling and being a caring person.”

Track star Blake Blakemore is Austin-East’s female Student-Athlete of the Year. The Lady Roadrunner senior has been one of the state’s fastest runners throughout her high school career that was cut short this spring due to the COVID-19 coronavirus.

“Blake signed early to Georgia State, because they saw what we knew about her for a long time,” said A-E Athletic Director Alvin Armstead. “Prior to school closing, Blake was working very hard in preparation for this spring’s track season. I truly believe Blake would have done some remarkable things this season.”

Blakemore was a 200-meter state champion and KIL 100-meter champion in her career and held a Top 10 ranking in the state in the 200 meters. She also was a two-time Knox Sports Awards nominee for track.

With a 3.7 GPA, Blake was a Project GRAD Scholar and a Knoxville Area Urban League National Achiever Scholar.

“Blake is a very special young lady who is liked and admired by all,” added Armstead. “She is a tireless worker athletically and academically. As a school and Athletic Department, we could not be more proud of Blake and all she has accomplished. We know that Blake will continue to keep the A-E tradition of Excellence and make us all very proud.”