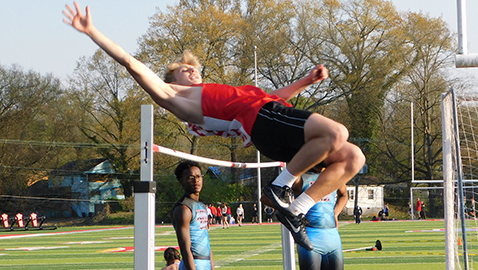 Austin-East’s sweep in the four relay events led the way to the boys’ team title last week in the annual Roadrunner Invitational at A-E.

Coach Sam Anderson’s team racked up 130 points to easily separate from the rest of the field. Carter edged Halls 75-74 for runner-up honors. Karns (67) and West (64½) completed the Top 5.

Thirteen schools took part in the Roadrunner Invitational, which is one of the oldest and largest regular season meets in Knox County.

Tyner Academy came from Chattanooga to compete in it. Others in the meet were Campbell County, Central, Grace Christian Academy, Gibbs, Fulton, TSD and the Knoxville Home School Ambassadors.

Larry Brown, a junior, was a double winner for Austin-East in the individual competition, going over the high jump bar at 5 feet 4 inches and prevailing in the triple jump (38-3½)

Austin-East had three runners in the Top 5 in the 800, including senior Shawn Prater (second place) and junior Darrayan Smith (fourth place).

Others that contributed to the A-E boys’ victory were sophomore Rhyan Seagrave (second in the high jump) and senior Xavion Bogus (third in the 400).

Carter junior Asante Burton was impressive in the long jump with a leap of 21-5. Halls junior Tae Rucker took second and set a school record with his 21-1½ effort.

Skylar Noe, Halls sophomore, had a winning effort of 105-4 in the discus event.