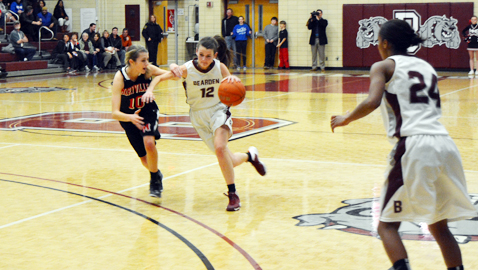 Bearden’s Erin Walsh dribbbles past Maryville’s Abbie Anderson in a District 4-AAA game at Bearden. The Lady Rebels prevailed 58-57 in an overtime thriller.Photo by Dan Andrews.

On a night filled with clutch plays and big performances it was Leila Bangash who stole the show for Maryville High School’s girls basketball team in its 58-57 overtime victory at Bearden Wednesday night.

“What about Leila Bangash?” Lady Rebels’ coach Scott West said. “She had 12 rebounds and hit all of her free throws down the stretch.”

Bangash was indeed clutch in a key District 4-AAA win over the Lady Bulldogs (15-3 overall, 4-2 in the district).

The senior guard/forward hit the game-winning free throws with 4.2 seconds remaining in the extra frame. She also got the Lady Rebels (13-3, 5-1) to overtime by converting a pair of foul shots with 11.4 seconds left in regulation to tie the game at 59.

Maryville had to work a little overtime to nab the crucial district win but early on, it appeared that the Lady Rebels were going to win in a runaway.

Bangash gave Maryville a 43-33 lead with a pair of free throws with 4 minutes, 49 seconds to go in regulation and it seemed as though the Lady Bulldogs were finished.

Bearden closed the fourth quarter with a 16-6 run and even opened a 48-47 lead with 44 seconds left on a basket by sophomore guard Kyra Burris, a transfer from West High, who came off the bench and scored seven points after halftime.

Starting point guard Holly Hagood added another foul shot a short time later to extend the Lady Bulldogs’ advantage to 49-47 with 26.2 left in the fourth quarter.

Bangash then sent the game to overtime. She scored 12 of her 13 points after halftime and pulled down 12 rebounds. She was a force on the offensive glass. She had six offensive rebounds that led to Maryville baskets.

In overtime, the Lady Rebels scored first. Kayla Tillie, who led Maryville with 15 points, made it 52-49 with a bucket and a free throw. That play was huge because Hagood fouled out on Tillie’s shot.

Bearden’s Erin Walsh made it 52-51 with 2:49 to go. Tyler Carter tied the game with a free throw a short time later.

Walsh, who led all scorers with 18 points, knotted the game at 54 before Maryville’s Dee Cook scored to help the Lady Rebels retake the lead.

The Lady Bulldogs got their lone lead of overtime when Lexus Norwood buried a 3-pointer with 9.7 seconds left.

“It’s awesome to come over here and get a win against Bearden on the road,” Bangash said. “They’re always a tough team.

“We’re so happy and it’s really nice to come over here and get a win at their place.”

Maryville had five players post double figures in the scoring column. Bangash led the way with 13 points. Tillie and Madison Coulter finished with 12 each. Cook added 10.

“We talked about the fight we had in the fourth quarter but we haven’t put together four quarters of basketball this season,” he said. “Bangash was big for them.

“She was 8-for-8 at the free throw line [after halftime] and she did a great job for them.”

Underwood also praised Burris and Hagood, who nabbed Bearden’s first few rebounds despite being the smallest player on the floor.

“Kyra was big for us tonight and Holly always plays hard and gives us a great effort,” he said.