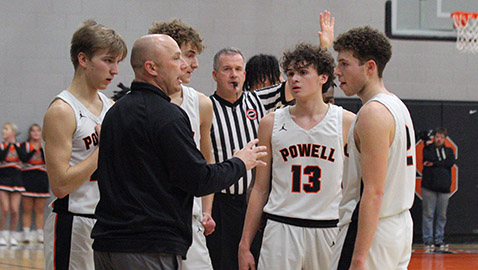 With tournament time just ahead, the Powell Panthers couldn’t be peaking at a better time.

After an up and down regular season, Coach Gary Barnes’ team came on strong at the end, defeating rival Halls 61-59 Feb. 4 and knocking off Clinton, the state’s No. 1 ranked Class 3A team, 65-62 on Feb. 7. Both games were at home and in front of spirited crowds.

“The Halls game is always an emotional game, but we won it in the last possession,” recalled Barnes. “Ayden Greene made a great assist to Austin Heard underneath and he finished it.”

Greene and Heard also led the Panthers in scoring in their surprising win over Clinton with 26 and 18 points, respectively.

“We played well,” said Barnes. “It was one of the better games for us as far as following our defensive game plan. We really executed that well. Clinton is a really good 3-point shooting team, but we were able to make them work hard for their 3-pointers.

“It was an exciting win and we had a nice crowd. I was proud of them.”

The loss was only the third for the Dragons in 24 games. The Panthers had lost at Clinton 75-51 in late November.

Barnes said the win over Clinton had taken a lot out of his team, but the Panthers still had a road game to be played the night after at Jefferson County.

Powell got through that one too and won 66-56, although Barnes said his team was “tired physically and emotionally. Our kids really gutted it out.”

Reflecting on the season prior to Thursday’s regular season finale at Sevier County, the Powell coach said: “I’m proud of the boys. We’ve had some ups and downs this year and lost some close games late, and of course we got our football players late and that affects you. I think right now we’re just hitting our stride and it’s the right time.”

Powell’s opening test in the District 3-4A tournament at Campbell County High will be an elimination game Thursday at 6 against West in a matchup of the No. 4 and 5 seeds. No. 3 seed Karns will go against No. 6 Central in the other do-or-die contest. Top seed Oak Ridge and No. 2 seed Campbell County earned first round byes.

When asked about his Panthers’ potential in the post-season, Barnes was highly optimistic.

“I think we can beat anybody,” he said. “We’ve got some length, some veterans and some good young kids. Our Achilles has been foul shooting and we’re getting better there.

“I think we’re confident and I think we can beat anybody that we might have to play, so I look forward to what we can do,” he added. “I think we can make a run, if we keep shooting the ball well and convert at the free throw line. This team has practiced really well all year. It’s starting to pay off for us.”

Powell’s regular starting five includes Greene, Heard, Brice Jardret, Eli Walls and Kaleb Walker. DeArius Kinnebrew has started some games. Two others who have been in the rotation are Noah Brewer and Jake Smith.