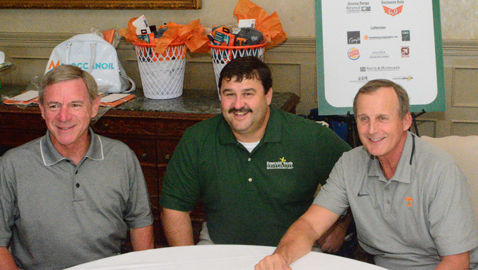 Rick Barnes may be Tennessee’s head men’s basketball coach but he also wants to contribute to the community. That’s why he became involved with Knoxville’s Emerald Youth Foundation.

“When I first got here, I wanted to do more than just coach basketball,” Barnes said as he started the 18th Annual Emerald Golf Classic on Monday, Aug, 29 at Gettysvue Golf Polo and Country Club. “And I was told that they found the perfect opportunity for me at the Emerald Youth Foundation.

“I went over there and saw the good things that were going on and I had to become a part of it. I’m just really honored to be a part of it because I had people who kept me on the right path when I was growing up and I had a place to go after school.”

Barnes ad mired the work of the foundation so much that he took a spot on its Board of Trustees.

The tournament’s goal was to raise funds and Barnes said that he would match the money raised by last week’s golf outing.

Emerald Youth Foundation Director of Marketing and Public Relations John Crooks has been involved with the tournament for 10 years and he always looks forward to the event.

“This is the 18th year that we’ve had this tournament and it’s one of our big fundraisers,” Crooks said. “We have this and then we have our Legends Dinner, so as soon as I’m finished with this, I will get to work on that.

“This is a great chance for the players to come out, play a little golf and have a little fun. It’s just a thrill to have Coach Barnes here. This is the second year that he’s been involved. He stopped by last year and the reaction was so positive that he came back again. He came out to get things started and he’ll be back with us again at the end of the day.”

Barnes said that the connection between the Emerald Youth Foundation was a natural one.

“When I was growing up, I looked up to my coaches and my sixth, seventh, eighth and ninth grade teachers,” Barnes said. “They were the people who helped me get to where I am today.

That’s a philosophy that the second-year Volunteers coach passes along to his players.

“People would be surprised at how many college basketball players benefitted from faith-based programs like the Emerald Youth Foundation, we always want our players to give back to the community because the community comes out and supports us,” Barnes said.

Garry Phillips, a retired boat dock builder played in last week’s event and said he was glad to play a round of golf while contributing to a good cause.

“I’ve played this course before and it’s a great course,” Phillips said. “I heard about this tournament on the radio and then I wanted to play in it.

“It beats sitting around the house and it is for a good cause.”